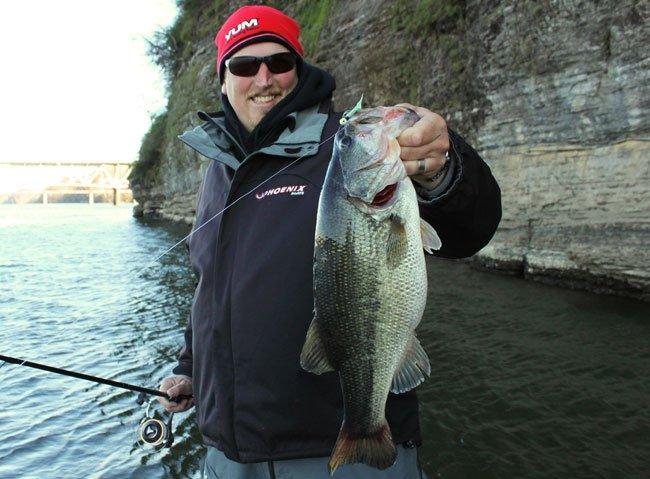 If you want to test your patience, try fishing the float and fly on a cold winter day. It’s quite possibly the slowest way to fish for the most lethargic bass of any season. It’s a technique, however, PRADCO pro Jimmy Mason relies on to heat up even the coldest winter day because it is so effective.

Having used the rig to amass several top 10s in recent years, Mason has also developed a knack for the bait on his home waters in Alabama. Any lake where the water is cold and clear is a great place to sample the technique. As the water temps sink below 55 degrees, Mason will add the bait to the arsenal It is when the water drops to the 43-45 range, however, when the bite really ignites.

If you’re a fan of fishing a jerkbait in the winter time, then locating the fish shouldn’t be a problem. The fish that eat the float and fly are oftentimes the same fish that were attacking the jerkbait when the water was 7 or 8 degrees warmer. But as the water cools, the fish become increasingly lethargic and many shut down to the point that they won’t even hit a jerkbait on the pause. But they can’t resist a fly in their face.

These fish set up in areas where they can suspend. Generally steep chunk rock banks or bluff walls will hold fish at some level in the water column. You can also use the bait to pull bass from below docks. However a lot of times the fish will be further off the structure than you would expect, especially in windy conditions.

“It’s not one of those deals where you are making really tight parallel casts,” Mason said. “You’ll actually catch a lot of the fish half a cast from the bank. Bluffs are definitely my favorite, but marinas are also really good. The best docks have about 30 feet of water under them.”

Although you may be sitting in 30 feet of water you are typically only fishing a third as deep. Mason will start his bobber out around 8 feet from his fly. This makes casting a little tricky, which is why he uses a special Tennessee handle Float and Fly rod made by B’n’M that is 10 feet long in non-tournament situations. Guiding as much as Mason does on Pickwick and Wilson, he often uses the rod and is confident that the extra 2 feet makes all the difference when casting.

If using the technique in a tournament, however, the 8-foot rod rule comes into play, and Mason will move to the Dobyns Champion Extreme Spinning Rod DX 762 SF. This rod also has a very light action and parabolic bend that proves important when fighting a big fish on light line and a little hook. The shorter rod does present a larger problem when casting though. Especially considering the bobber starts 8-feet from the fly for Mason and only moves farther away.

Therefore Mason’s casting technique has to borrow a little from the fly fishing guys. He brings the fly behind the boat and makes sure it touches the water before he brings the rod forward again. This contact with the water takes slack out of the line and helps make the cast go a lot farther.

Since the line used by Mason is only 4- to 6-pound test Vicious Elite Fluorocarbon, landing the fish can be rather difficult as well. Add to that the fact, 8 to 10 feet of line is un-retrievable by the reel due to the bobber, so you have a real battle on your hands no matter how docile the bass may be. The only option is to handline the fish in, being sure not to put too much pressure on the light line nor bend the small hook on the fly. 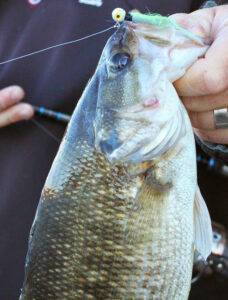 The fly Mason chooses when employing the rig is a Punisher Lures Float and Fly Jig with a blue back, pearl sides and a pink belly. If the water is extremely clear he’ll change over to a duck feather fly also made by Punisher Lures since the duck feather gives off a great, subtle look in the clearer water. Both flies start out for Mason at 1/16 ounce and move up to 1/8 or down to 1/32 depending on the conditions.

“If the wind gets up, you’ll need the heavier weight,” Mason said. “But sometimes you have to use the 1/32 ounce fly for the slower fall.”

Working the bait consists of a series of slow pulls each accompanied with a pause. The fly is so light that as you pull it along it will actually rise in the water column and then settle back down on the pause. Each of Mason’s casts will typically last 2 to 3 minutes. Fishing this slow calls for a little something extra in the scent department which is why Mason will coat his flies in the YUM F2 shad or garlic scent.

Perhaps the most important part of the rig is the weighted Bob’s Bobber that Punisher Lures makes. Since the bobber is weighted, it tips over a lot easier when the weight of the fly is taken off of it. With the fish as inactive as they are this is often the only indicator of a lot of bites.

“Some of your biggest fish will just inhale the fly and sit there,” Mason said. “You’ll never see the bobber go under. It just lays over flat.”

Then again some will pull the bobber out of sight. A vision that will take many of us back to the old creek bank or lake shore where we first fell in love with the sport of fishing. A reminder of time spent watching some small panfish snatch a cork under only to find our golden Eagle Claw hook as barren as it was when we first pulled it from the pack.

Bass fishing is all about the chase. If you are looking for something different on your local lake this winter, give the float-n-fly a go. It may be just the ticket to get the slow moving, suspended bass in your lake to bite. Just make sure the water is clear and that enough time is invested in each cast and you may just find a passion for the rig as strong as Mason’s.