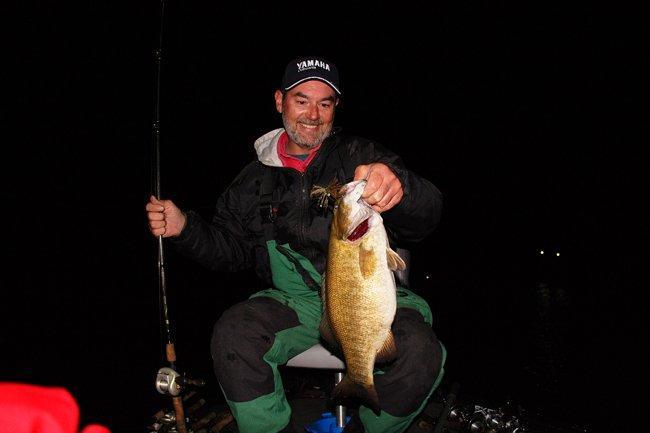 The air seemed sliceable. A cold misty like fog enveloped the lake as water droplets seemed to float across the beam of light coming off the spotlight. The motor’s purr came to an abrupt stop and the sound of the whistling wind muted any other ambient noises in the darkness.

The sounds of lines zipping through guides a faint splashes in the distance kept the mind focused on the task at hand as it has a tendency to wander without any visual stimulus. A light grunt and seconds later a frothing sound in the water grew closer.

“Get the net! It’s a freaking giant!” exclaimed Mitch Looper, well known big bass angler from Hackett, Ark. Looper kept the tension on the rod and swung the big fish into the net. It was a beautiful golden brown smallmouth from the frigid clear waters on Lake Tenkiller in Oklahoma.

“This is why you brave the cold weather at night,” Looper said as he held the bass up beaming with pride from a quick catch on a cold night.

The bass fishing can slow a lot in the winter, but it’s often a time of year when you catch big fish just laying around fattening up. Smallmouths keep very unique schedules. In fact, I’m not sure anyone fully understands their cycles and movements as well as the largemouth bass cousins. They seem to be more nomadic, less affected by terrible weather than their black bass cousins.

“I keep my fishing really simple this time of year,” Looper said. “It’s either a jig or a tube for me. I’ve tried and tried to catch them on a spinnerbait, but where I fish it just never works out. It could be the clear water. It could be the types of areas I find big smallmouths, but a jig and a tube catch so many more big bass.” 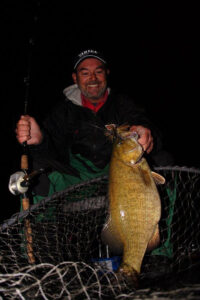 Looper’s two baits of choice are a Booyah Pigskin Football Jig and a Yum Mega Tube in Ozark  Smoke. The latter might seem like an odd lure for night time fishing, but Looper’s research and time on the water have shown it to be far superior in numbers and numbers of big smallmouths than a jig or even another colored tube.

“Everything we’ve learned about fishing at night says we have to use solid dark colors because the fish are honing in on silhouettes not colors and hues,” he said. “But I’ve proved it over and over to myself. I’ll give my partners the Ozark Smoke tube and I’ll fish with black neon, black and blue or some other dark color. They will catch 10 fish to my 1 until I finally switch over.”

For his tube fishing, Looper sticks with 1/4 ounce. The reason for this one size no matter what approach stems from many years training to weigh the tube at 1/4 ounce. He picked one weight early on and learned to measure and feel what the tube did in a variety of situations with that one weight. Now if anything changes that weight or what he knows he should be feeling, he sets the hook. The jig is most often 3/8 ounce.

Looper said timing smallmouths is often different this time of year for night fishing than he’s found for other species or other times of the year. His prime time is one hour before dark until midnight. After midnight, the bite dwindles. But in the 6 hours or so prior to midnight Looper believes the smallmouth are taking advantage of their nocturnal prowess before the water cools down too much. Its had all day to warm up and they get warm water with low light conditions to feed.

The other key to his timing involves moon phases. Looper does most of his damage on full or ½ moon phases. He’s tried to catch them on new moon phases and he knows other anglers have great success but for his system, he has to have a little more influence from the moon on those bright full moon and half moon nights.

The search for big brown bass starts on steep 45 degree banks that offer some larger broken or chunk rock. Early in the winter these steeper banks tend to hold smallmouths that suspend during the day and then move up on the banks to feed at night. The best depths are regularly 2 to 12 feet deep.

As the winter moves closer to spring, his most productive banks change from steep rock to long tapering gravel. The type of points that come off the bank and gradually drop and then extend far out into a bay or channel before falling off at the end. An ideal setup this time of year for Looper showcases a gradual flat gravel bank that slowly tapers to about 12 feet in depth and then extends for a bit longer before dropping into the channel. When he finds this type of long flat point, he often has big catches in terms of numbers and size of smallmouths.

His technique is always the same though, a slow steady drag. He calls it scraping the rocks. Just trying to feel each rock as his tube or jig slides over it. The fish will often just pick the lure up and start moving off with it. Because Looper doesn’t use any lights, being in tune with his jig or tube enables him to catch most of the fish that bite.

“I take people with me and they are surprised that we catch 30 to 40 smallmouths in one 6 hour trip and all the fish are 3 pounds or better,” Looper said. “On a good night, we’ll have several fish weighing more than 5 pounds and pretty consistent action all night. But don’t get me wrong. If you think a smallmouth is hard to land during the day, you should try it at night.” 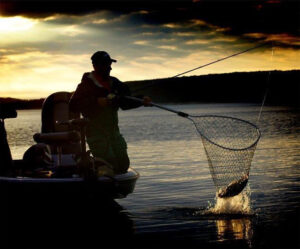