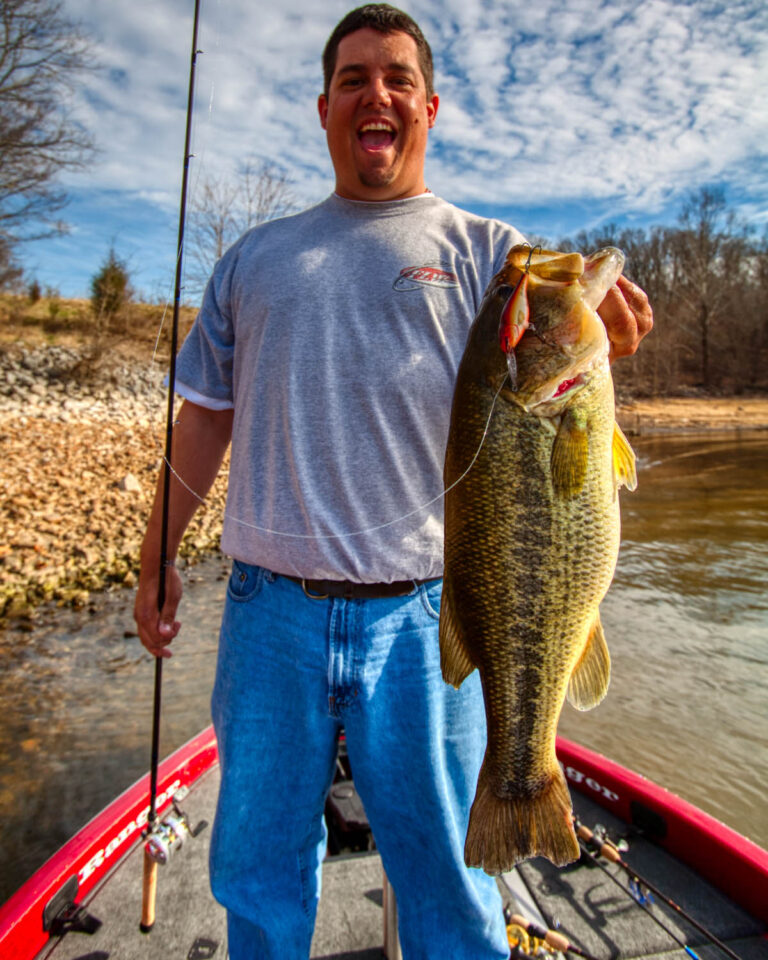 Early spring, late winter. It’s when everyone starts thawing out and the fishing bug is so bad people are breaking out to the lake at the first sign of better weather. It’s surprising how many folks go fish on those clear sunny days when many of the times, it’s the wicked weather days that can be some of the best fishing in the early prespawn period for bass.

There are always several ways to catch a bass regardless of season, temperature or other weather variables. No one way is the PERFECT way to catch a bass. Having said that though, there are a lot of nuances with each technique and class of baits that can make each more effective in given situations.

As anglers we need to be fluent in the many nuances of every technique to better apply them at the appropriate times. Will bass bite a crankbait in the prespawn? Sure they will. But as conditions change, as the often do rapidly and violently in the early spring, are there better ways, better tools and better applications for crankbaits depending on the situations? You better believe it.

I tell most folks that fish with me, one of my favorite windows of fishing every year is that real early prespawn crankbait bite. I’ve had a lot of success over the last 20 years, but I’m always looking to improve it that much more. I recently reminisced about a spring outing with a buddy, one of my first on Kentucky Lake where we absolutely sacked up the bass. What I hadn’t told most folks until the photos were made public is that it was my first 20-plus-pound sack of fish on Kentucky Lake, not really knowing anything about the lake.

I told most folks that I caught them cranking shallow. What I didn’t tell them is that I did it with 6-pound line and No. 7 Rapala Shad Rap custom painted by John Prior. And that choice wasn’t a random occurrence. I had been catching the bass decent while it was windy and overcast on a Bomber Flat A, a staple for me in the prespawn. But as it got clear and calmed, the bite waned. So out came the spinning rod and light crankbait and the fishing went from decent to outstanding quickly.

I talked for a few hours with Craig Powers a few weeks back about spring cranking. It was refreshing how forthcoming Powers was with stuff he’s figured out over years of travelling the country fishing and how much we think a like when it comes to finesse crankbaits in the prespawn. In that time, he’s also been making custom plugs and fishing them undercover until deciding last year to take his baits public.

I’ve been throwing his CP Series plugs since last year, and they have worked their way into my “special box” of plugs for when the going gets tough. But its understanding what makes the “going tough” that I think will be of most benefit to all of us as anglers.

“When the water temperatures get back up to 48 degrees, I can catch them on a plug,” Power said, referring to his finesse cranks. “I’ve caught them in colder water, but there are probably better ways to catch them. Now if it’s cooled down to less than that, it can be real tough, but if it’s warming up and not even 48 degrees, they will bite the plug.”

Obviously temperature can be relative to where you live and the type fishery you live on, but when its warming in the spring and nearing 50 degrees, you can bet the bass are starting to stir and will start showing up in some predictable places.

Most people like to fish the pretty looking banks like the bluffs, or rocky banks with stumps on them or maybe the flats in the backs of a cove. Powers shies away from that stuff especially in the early prespawn.

“When it’s real prespawn — and by that I mean not when the bass are up roaming the banks everywhere and you can see them looking for nests, but rather when they are all out off the bank waiting to move up and staging — I look for mud flats near the river channel with scattered rock. If you fish enough of those flats on the old river, you’re going to find them better. A guy might catch them on that pretty looking stuff, but that’s where most people are going to be so there is more competition. Flats have been the most consistent producers.”

Once you have an idea when to start and rough idea where to start, it’s just a matter of picking the right bait that you can throw a lot and start searching. The right bait is part personal preference, but a bigger part is picking the right tool out of the tool box. If you’re fishing in 3 feet of water, you don’t want a bait that dives 10 feet that is just going to dredge the bottom.

“I like a bait that stays close and just occasionally nicks the bottom, say maybe when I’m sitting  in 10 feet throwing up on the flat,” Powers said. “I don’t want it digging and I don’t want it riding 5 feet up off the bottom. That occasional contact is what really triggers the fish.”

Powers is going to reach for one of his three CP Series baits though when the conditions get tough for traditional crankbaiting.

“Where a homemade crankbait really shines is not on those windy, overcast days where everyone is catching 20 pounds in the spring with moving baits on Kentucky Lake,” he said. “It’s those days when it turns calm, gets real clear and the sun is out bright. You’ll work twice as hard to catch 12 or 13 pounds with those moving baits. That’s when someone with a little finesse or homemade plug is going to beat your hind end.”

On those days when the standard power chunk and wind with baitcasting gear and big plugs isn’t getting it done, Powers breaks out the spinning rod, 8-pound line and his CP Series crankbait and go to work. But he’s not foolish about it. He’s going to have back up rods with a flipping jig, a jerkbait and a Long A depending on water clarity and mood of the fish. But he’s always reaching for that finesse crank to start his search.

Water clarity, sun, clouds and time of year will dictate colors. Powers opts for keeping it as simple as possible with just 3 or 4 colors. In the spring a spring craw color can be dynamite and also with stained water. On most days a silver shad or white shad is hard to beat and then those days when it’s blue bird skies and five fish are hard to come by, a grey back with foil sides can be the killer.

“I’ve sat and listened to Gerald Beck and Smiley Wright talk about cranking and they never once talked to me about color. So I asked and Beck told me right to my eyeball if you bring it right by one, it doesn’t matter what color it is. I don’t think they are smart enough to say, ‘well I’d really rather have a chartreuse plug today.’ But we as fishermen still build up confidence with certain colors.”

“I fish these cranks on a spinning rod because my name isn’t Kevin VanDam,” Powers said. “If you fish March and April around Tennessee, you’re going to be fishing in the wind at some point. And if you have a baitcaster and I have a spinning rod, I’m going to get a lot more casts than you at the end of the day because you’re going to be worrying with backlashes and wind knots and everything else.

“But I also use this setup for another reason. As bass fishermen, we’re programmed with a baitcaster in our hand to jerk. Under 15 pound line, setting the hook is a waste, and I can prove it. Have a buddy go out 40 yards with a crankbait in his hand at the end of your line and set the hook. He won’t even get hooked at that distance. And that’s in the air. Instead I just reel into the fish and keep reeling until the hooks are driven. I don’t ever break my line either fishing like this with spinning gear.”

With finesse cranking, there isn’t a lot of stop and go and jerking the rod to impart extra action.  The reason is again that it’s a search game. If you’re starting and stopping all day and I’m just casting and winding and looking where to throw next, I’m going to have a lot more casts and opportunities to get bit than you.

Powers opts for Daiwa spinning reels with a 4.7:1 retrieve ratio. That will be a little faster than an equivalent baitcaster because the circumference of the spinning reel handle turn is much greater so it takes up more line. But still with that low speed he can reel at a decent clip and not have to fight all day to reel slow. The faster the plug moves, the less you can feel what it is doing.

All of these tips should give you the knowledge to put together another option for those tough prespawn days when your bigger moving plugs aren’t producing.