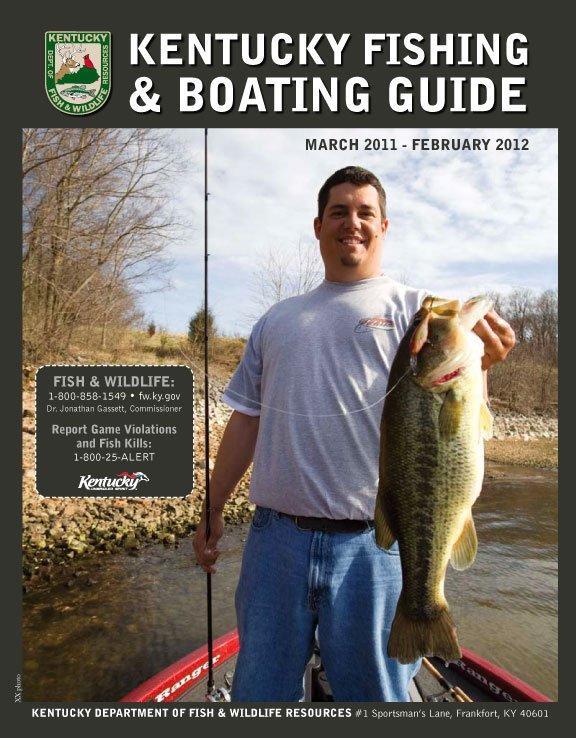 I’m a Florida boy, raised in New York, Virginia, California, Idaho, Hawaii, Arkansas and now Kentucky. I had a father who took me fishing in most of those places. But my true attachment to fishing came in Arkansas. Yet the best fishing I’ve consistently had has been since I moved to Kentucky, where I catch 5-pound smallmouths and largemouths to 8 pounds on fisheries like Dale Hollow, Kentucky Lake, Barkley Lake and more.

But I’m still learning Kentucky Lake, where I live, and the best way to do that is to get out on the water. I ran up to Walmart on my lunch hour, and it occurred to me I better check when my fishing license expires, as I plan to start going a little more as we approach Feb. and Mar., two of my favorite months for crankbaits.

As I went to the sporting goods counter, I saw me. There on the countertop was the Kentucky Department of Fish & Wildlife’s Kentucky Fishing & Boating guide for 2011-2012 with yours truly on the cover.

I had forgotten my good friend Brian Lindberg had helped them with the photos for their cover and mentioned he might have a photo of me in the mix. But still I guess I’m just like any other  angler who loves fishing in Kentucky, and seeing myself on that cover was pretty cool.

* Note on the catch

The bass in that photo was my first bass over 5-pounds on Kentucky Lake. I believe I caught that back in 2006. I was fishing a Rapala Shad Rap on 8-pound line on some flats and some 45-degree banks during the early prespawn period, and we got on one stretch that was literally loaded with good fish. We had a 4-pound smallmouth, two largemouth bass weighing more than 5 pounds, and two great big fish that pulled loose while trying to get them boated after lengthy fights, plus lots of other keeper bass. You have to love Kentucky Lake in the Spring!