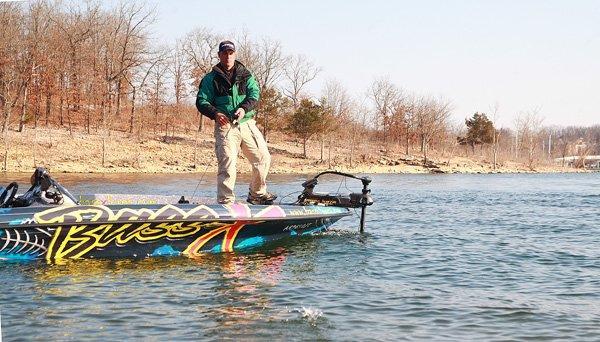 Greg Bohannan of Rogers, Ark., has grown up fishing clear water, highland impoundments. The amiable pro burst onto the scene a few years ago and since that time has been a consistent competitor. He garnered back to back second-place finishes in the 2007 and 2008 FLW American Fishing Series Championships (formerly Stren and Everstart Series).

The 2008 championship was especially noteworthy because he came back the last day with a huge 20-pound, 6-ounce limit. Had David Curtis not caught an amazing 22-plus-pound limit that day, Bohannan might have walked away with the title.

“I’ve always found that when the wind and weather get nasty in the Ozarks, the fish start biting,” Bohannan said. “We had a really strong cold front come through the night before the final day. I had been catching bass on a Wiggle Wart but decided to pick up the buzzbait the final day.”

That gut instinct yielded a jump up the standings from seventh to second. But it wasn’t a shock to him really.

“I have a buzzbait tied on all summer long, but when it starts turning to fall and those first few real cold snaps hit, I get excited about buzzbait fishing,” Bohannan said. “I start throwing a 1/4-ounce bait and fishing it pretty fast when the water is still warm in the fall. But when that first wicked cold snap hits — like 40 degrees at night — these fish in the Ozark highland impoundments run to the banks, and they go crazy for a buzzbait.”

Bohannan doesn’t pretend to know why the fish prefer the smaller buzzbait when the water is warm, but his many years fishing clearwater reservoirs in the fall, has shown him that it’s not until the water gets cooler that they really start pounding the bigger buzzbaits. In highland reservoirs, the bass are keying on shad on rocky shorelines, and a small white buzzer skittering across the surface is hard to resist.

In the fall, Bohannan’s buzzbait fishing is all about targets. Sure you can catch fish running the banks, but he prefers the banks, pockets and creeks with cover that is just barely visible under the surface. A pair of good polarized sunglasses is an absolute must. Bohannan prefers Typhoon sunglasses because they are affordable but do a great job helping him see those dark spots, whether they be large rocks or brush deep under the surface, that other anglers miss.

Sometimes he’ll just see a single twig sticking out of the water and a dark spot underneath. He gets excited because he said when the brush is just barely topping out of the water, it means there is good depth for a bass to hold there and it gives him a target to run his buzzbait around. Bohannan often finds the bass super shallow in water less than 4 feet. So he’ll run the banks as shallow as he can get and keep the buzzbait moving fast.

Reaction bites always seem to be more consistent when the weather is overcast, but in the Ozarks there is a local law – the nastier the weather gets, the better the shallow fishing will be.

“Most people get upset when those windy cold fronts blow through, but not us in the Ozarks,” Bohannan said. “The nastier the weather, the better the fishing usually is. Those fish just really like to eat when the weather gets ugly on these clear lakes.”

If Bohannan had his preference for buzzbait fishing it would be a small chop on the water, overcast skies and cooler water temperatures. However he did say that really sunny days have been good as well as long as it’s cooling and there is some wave action from the wind.

Obviously the bass aren’t just everywhere in the fall, but Bohannan’s general rule of thumb is to run the river this time of year. If not up the river, then he’s going up into the major creek arms. Once he gets there he starts targeting the flatter pea gravel type pockets with isolated cover. The fish just seem to position more predictably when there isn’t a steep depth change for them to vary their location.

“One of my best spots in that Table Rock event was an area where someone had dropped a bunch of crappie piles in the back of a pocket,” Bohannan said. “I’d run there every morning and catch a good one around 4 pounds off one of those piles.”

Bohannan goes big with the buzzbait as the water cools. He loves this style of fishing because, he can use a 7-foot medium-heavy action Razr rod, a high speed 7:1 ratio Abu Garcia Revo reel and 17-pound Berkley Trilene Big Game or 50-pound Spiderwire Braid. And he fishes fast all the time, even when the water temperature dips into the 50s.

Bohannan likes a white spinnerbait when the water is clear and the shoreline is rocky, but if there is vegetation around, he switches gears and goes with an all black buzzbait and black blade.
“That’s another one of those things you can’t ask me to explain,” Bohannan said. “I just know it’s true with my fishing because I’ve seen it over and over on different lakes.”

Like the Columbus Pool maybe? Bohannan won a spring FLW American Fishing Series event there a few years ago on what else “¦ a black buzzbait around vegetation.

“People are surprised at how well the fish bite a buzzbait humming along in 50 degree water,” he said. “They will come a long way to get it, even in the cold weather.”

One final tip Bohannan offered was a double trailer. On occasion, Bohannan will fish his buzzbaits on fairly open rocky banks with two trailer hooks. He’ll have a single trailer hook and then hanging off that hook he has a treble hook hanging off the back of that hook. He’ll trim the bottom of the three hooks on the treble so that it’s not as snaggy around those isolated pieces of cover. The bass really slash at the bait at times and you need every advantage you can get. 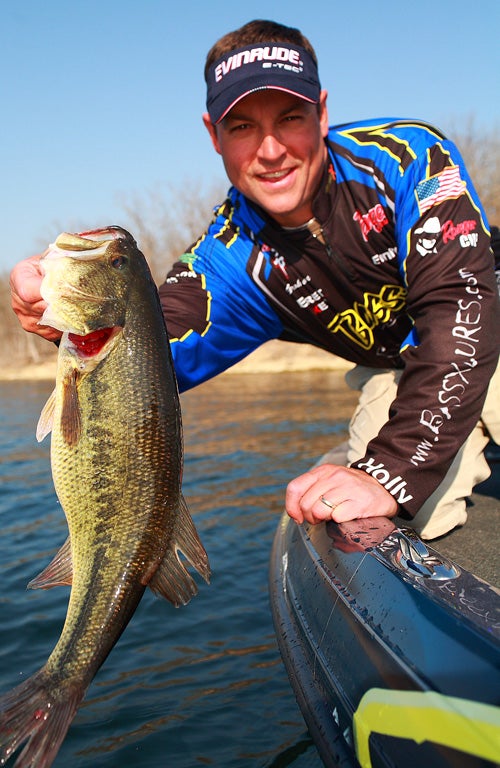