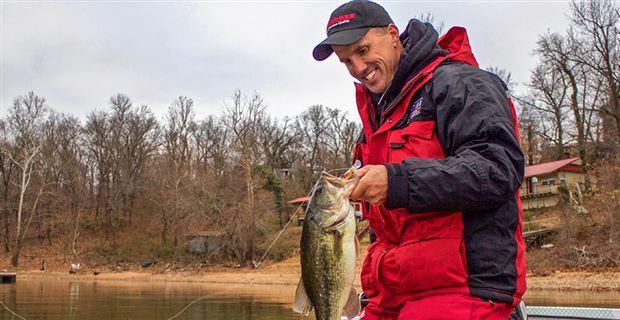 Crankbaits and cold-water bass fishing are not necessarily synonymous—they are often repelled by the aggressive action many crankbaits emit. There are certain crankbaits, however, like the Megabass Flap Slap that defy this notion.

2016 Bassmaster Classic champion Edwin Evers is a huge believer in the Flap Slap’s effectiveness and has spent many days on the water fine-tuning his approach with this particular lure.

“The Flap Slap is one of my favorite cold-water crankbaits,” Evers said. “I’ve caught bass in water as cold as 36 degrees with it when other parts of the lake still had ice.” 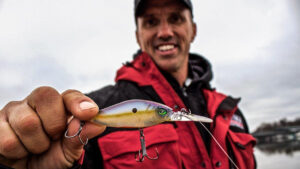 Evers has proven that the Megabass Flap Slap’s unique, tight-rolling action will entice bass to bite in extremely cold conditions, especially after he makes a few small adjustments.

“Honestly the Flap Slap is ready to catch fish right from the package,” Evers said. “But there are a few modifications I make specifically for cold-water scenarios.”

First, he swaps out the treble hooks for No. 4 Mustad Triple Grips. Years of experience and experimentation with different treble hooks have given Evers the utmost confidence in Triple Grips. Evers has caught lots of bass that were barely hooked, with nothing but one treble keeping them pinned; he attributes these catches to using the proper hooks. 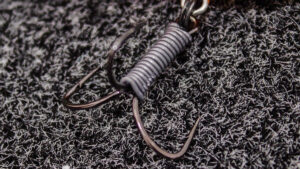 He also wraps the front treble hook with wire to add a small, but important, amount of weight to the lure.

“The added wire makes the bait suspend when you pause it,” Evers said. “Without any added weight, the Flap Slap slowly floats, which drives bass crazy when the water warms up. But when the water is cold, I want that bait to suspend much like a Vision 110 jerkbait. Adding wire, or Suspend Dots, makes the Flap Slap suspend perfectly.”

It’s all about the retrieve 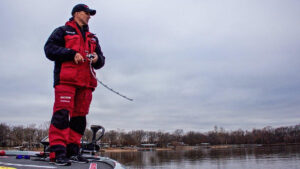 Perhaps one of the true secrets to the Flap Slap’s efficiency in cold-water is the distinctive retrieve Evers employs.

“I use a ‘reel, drag, pause’ retrieve with the Flap Slap in cold water,” Evers said. “After I cast, I’ll reel the bait to get it down to its running depth. From there I slowly crank the lure along, using my rod instead of my reel, to drag the lure a few feet at a time. After the drag, I briefly pause the bait. I repeat this process throughout the entire retrieve.”

When watching Evers, it almost looks as though he utilizes a traditional stop-and-start retrieve. Upon closer inspection, however, the intricacies of his retrieve are apparent. According to Evers, the most important action emitted throughout the cast comes naturally from the Flap Slap. 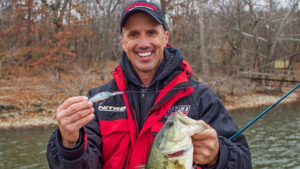 “The Flat Slap has terrific secondary movement,” Evers said. “That’s one of the things that makes this lure so effective. If you watch it in the water you’ll notice the front of the bait kicks upwards towards the surface during a pause. This looks exactly like a dying shad struggling to swim. This results in a good majority of my bites coming during a short pause in chilly water.”

Contrary to most cranking scenarios, Evers doesn’t necessarily want his lure digging the bottom. Instead, he uses the Flap Slap as a sort of crankbait/jerkbait hybrid.  ?

“With this retrieve, the bait isn’t always going to be digging the bottom,” Evers said. “The Flap Slap dives between six and seven feet and while I like to keep it within a few feet from the bottom, it certainly doesn’t need to be making bottom contact the entire cast.”

Use the proper gear 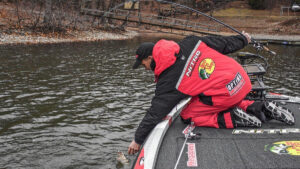 Evers’ preferred equipment is key to getting the most from this unique bass fishing lure:

Evers uses a cranking rod with an incredibly light tip, which is imperative when using a treble-hooked lure in cold water.

“A medium-action rod with a lot of give in the tip is hugely important,” Evers said. “When the water is cold and bass are sluggish, you’ll have a lot of fish slap at the bait, barely getting hooked. A rod with a lot of tip will help those fish get the hooks and will lessen the chance of a fish pulling off. The right rod and proper hooks could be the difference between getting a bunch of fish in the boat or just getting several bites.”

Along with a technique-specific rod, Evers uses a 5:6:1 gear ratio casting reel. The slower gear ratio helps Evers slow his retrieve down to attract inactive bass. Additionally, a slower reel avoids overworking the bait, illuminating the entirety of the Flap Slap’s action.

If you’re looking to add another lure to your winter fishing arsenal, the Flap Slap is a terrific option. Apply Evers’ tips and test his tactics on your local fishery—it’s never too late to learn a new technique.