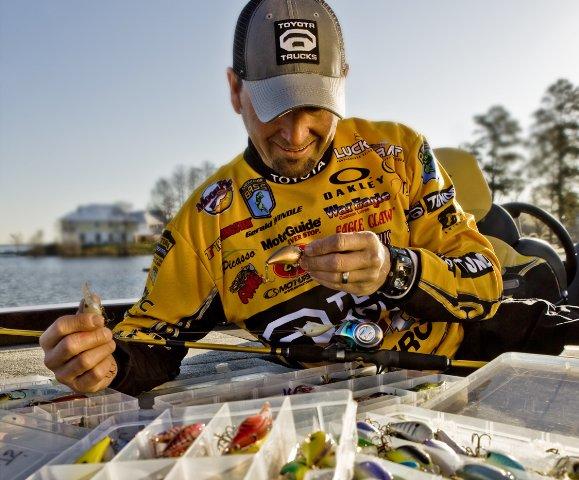 Conversations about hot trends, techniques and lures along the Bassmaster Elite Series trail are as common as gossip at an 8th grade slumber party.  However, seldom does anybody discuss the popular lures of yesteryear.

So we asked a few of the top anglers in the world what they’re not using?  We wondered what lures that once had a prominent place on the pro trail have faded to near obscurity.

â€œSpinnerbaits played a role at the Bassmaster Classic in Shreveport, but for the most part, spinnerbaits are nowhere close to the mainstay lure they used to be. And that’s primarily because they shine in the pre-spawn and late fall, and most of our tournaments are held between post-spawn and early fall,â€ said former Toyota Tundra Rookie of the Year Dave Wolak.

Swindle stills loves buzzbaits, but admits their recent importance seems insignificant. â€œTell me the last time you remember somebody using a buzzbait to win a Bassmaster event,â€ challenged The G Man.  â€œI grew up fishing them, still use them and love them, but they’re not a lure anybody seems to win with anymore.â€

A lack of popularity is not limited to bladed baits.  â€œThe standard 6 or 7 inch, Texas rigged plastic worm is pretty much forgotten,â€ according to â€œBig Showâ€ Terry Scroggins.  â€œThe 10â€ worm and the football jig can be fished a lot faster than the smaller worms in many of the same situations.  And often times you’ll get a bigger bite.â€

Iaconelli credits the near extinction of yet another lure to changing techniques.  â€œGrubs have gone away.  I used grubs a ton in my Federation Nation days.  I always reached for a grub if I needed a bite when lots of fishing pressure was around.  But now, I reach for a Shaky Head or a Drop Shot instead.â€

Toyota Tundra Bassmaster Angler of the Year Kevin VanDam agrees with Ike that fresh lures replace old ones. â€œEssentially, we’re catching bass from the same habitat and structure we’ve always caught them in and from, but we’re using new and different lures to catch them in those places.  I’ve sure got a ton of Strike King pork frogs that haven’t made it out of my garage in a long time,â€ concluded VanDam.