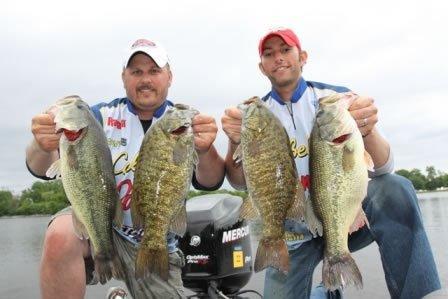 Brad Rubin and Chris Jones carved their names in

mixed bag of beefy largemouths and bronzebacks — anchored by a 4.52-pound

smallie that was big bass of the tournament — earned them a $10,000

pretty happy,” beamed Jones, of Neenah, Wis. “We expected it

would take more than 17 pounds to win. After practice we felt good that we’d

be in the running, and it turned out perfect.”

to fish with Chris,” added Rubin, of Antioch, Ill. “He definitely

had the home cooking on this body of water; he lives a mile from the

ramp. A week of prefishing didn’t hurt. We fought through hot weather

and high winds early in the week, then really cold weather and decent

winds the rest of the week, but we made it happen.”

but prefishing quickly proved it would be a post-spawn bite. Their

with rocks and weeds in 2 to 8 feet of water, throwing 3/4-ounce

football jigs tipped with soft-plastic trailers, fished in a variety of

manners. “We had to use different techniques,” said Rubin. “Sometimes

they hit the jig popping off the rocks, sometimes dragging, sometimes

just reeling it in slow.”

of Saukville, Wisconsin, won the U2 bonus for being the highest-placing

team with U2 Pro Formula Livewell Treatment in the boat. In 12th place,

fellow Wisconsinites Mark Duerr, of Milwaukee, and Tim Sadowske, of

received a great line and bait package comprised of these fine products.

Winnebago Chain yielded 141 bass weighing a total of 372.79 pounds. All

but one were released alive in the NABC’s catch-and-release format. The

Circuit’s Bass Conservation Fund donated $15 per boat, for a total of

$480, to the Wisconsin Department of Natural Resources for fisheries

projects on the Winnebago system. To date, the NABC’s sister trail – the

Cabela’s Masters Walleye Circuit – has donated more than $275,000 to

fisheries projects where our tournaments are held, and the NABC is proud

to build on that great tradition of fisheries conservation.

the weigh-in, the NABC and National Professional Anglers Association

presented kids age 12 and under with great gifts, including free

rod-and-reel combos, along with free tackle packages from Northland

Fishing Tackle. To the delight of the large crowd gathered at scenic

Menominee Park in downtown Oshkosh, a parade of youngsters took the

stage to accept their tackle, offer their thoughts on bass fishing, and

This was the first stop of the NABC’s inaugural season.

bad-weather day). The third and final qualifier is August 19 on

Minnesota’s legendary Lake Minnetonka. NABC teams are vying for a coveted invite to the World Bass Championship, set for Sept. 24-25 on Leech Lake,

The NABC is open to all

anglers. And its popular team format — which lets you choose your partner

on the Cabela’s MWC. Openings remain for Escanaba and Minnetonka. Teams

may register by mail, fax, or online. For details visit the