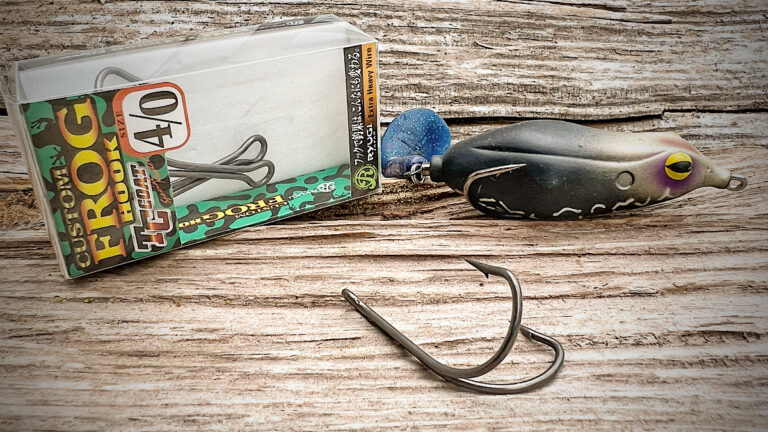 A hollow-body bass fishing frog is one of the best and most versatile topwater baits of all time. You can fish it through or over sparse to thick cover, skip it under bushes and docks and even fish it out in open water as well. A hollow-body frog probably has the best hookup ratio of any topwater out there as well. That is, however, if you do a little tinkering with it.

There’s long been a general consensus that bending the hook points of a frog upwards just a little greatly increases the hookup ratio of this style of bait. It’s something I’ve seen both professional anglers and weekend warriors do and something I’ve done for decades now myself. It works really well if you do it right, but there’s a fine line between bending the hooks too much and not enough.

So we’re going to look at a new alternative for this method. And that is to change the frog hook out for a different one all together, with an upward bend built into it straight from the factory.

Why you should change your frog hook

In the process of reviewing a few frogs recently, I have noticed that some of the newer ones actually come with a hook that already has a slight upward trajectory to the hook points. But for most of the different models of frogs out there, the hook points run almost parallel to the backs of the baits or even curl down a bit.

This makes a frog super weedless but also makes hooking a bass hard sometimes. You have to count on the bass compressing the body of the frog all the way for its mouth to find the business-end of the the hook. Unfortunately, that doesn’t always happen. Having an upward angle to the points of a frog hook makes a frog a lot stickier in a fish’s mouth. Again, in the past we’ve had to bend the hook points up to achieve this. But that process comes with drawbacks.

If you open a frog hook up too much, it will snag cover constantly and there’s the chance you’ll jeopardize the integrity of a hook by bending it, which could result in the hook opening up even more during the fight of a big fish, which can ultimately lead to the loss of that fish. But if you don’t open the hook up enough, then the hook point will sometimes bury up in the plastic, making it almost impossible to hook a bass. There’s also the inherent risk of damaging the barbs of a frog hook while trying to bend the points up and if this happens the hook is ruined.

How to change your frog hook 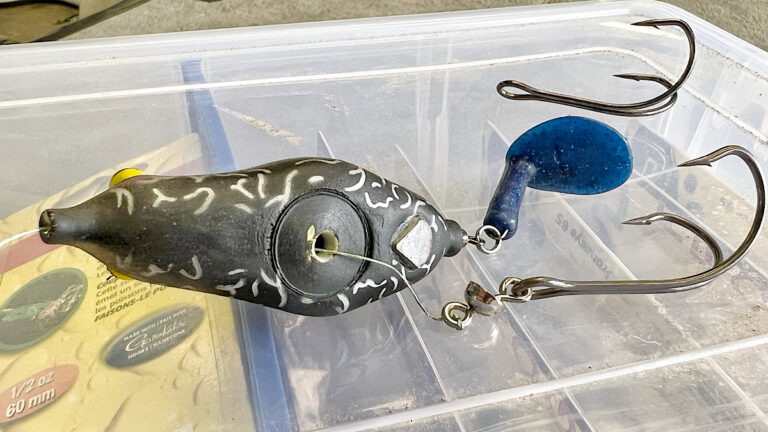 This is where a new frog hook to hit the market has given us an alternative. The Ryugi Custom Frog Hook comes two to a pack for $9.49 and is available in two sizes, 3/0 and 4/0. I was put onto this hook and the process of swapping out a stock hook for it by my buddy Tom Frink. Prior to then, I never really thought about swapping a frog hook like this.

The process is fairly simple, though. You just take a piece of braided line and tie it to the frog’s line tie eye. Then hold the body of the frog tight and pull on the bends of the hooks to pop the stock hook and line tie assembly out of the tail-end of the frog. Take a pair of needle nose pliers and open up the bottom of the line tie assembly to slide the old hook off and the new hook on. Pinch that back shut. Then pull on the end of the braid that’s sticking out of the frog’s nose and the hook should slide back up into the body of the frog until the eye of the line tie pops out of its nose. That’s it for most frogs.

Again, this hook comes in two sizes. The 4/0 Ryugi Custom Frog Hook fits most “normal” size walking frogs and the 3/0 suits most popping frogs well. If you’re uncertain though, you should be able to find out what size hook comes stock in the frog your working with by looking on the original packaging of the frog or doing a quick Google search. 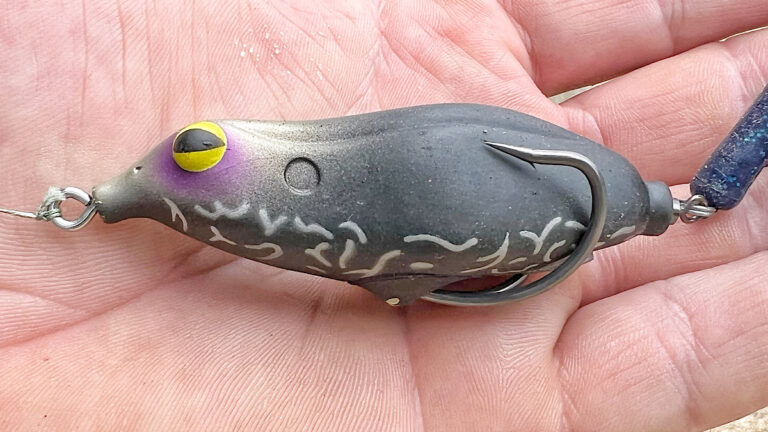 There is still the option to bend your frog hook up a little if you want. But if you’re looking for another alternative, Ryugi has created a great hook that will eliminate a lot of the guess work of trying to create the perfect bend on your own. Swapping the hook out isn’t necessary with every frog, since some brands come with a good bend to the hook straight out of the pack now. You should be able to look at the stock hook and tell if it has a good bend based on the angle of the hook point compared to the back of the bait. If the hook point runs parallel, consider swapping it out. If there’s an upward angle to the hook, you’re good.

If you do decide to swap a hook out, it’s pretty easy. Just tie a foot or so of braid to your current hook, pull the hook out backwards, cut the old hook off and tie the new hook on. Use the braid to pull that hook back through. It’s really that simple most of the time. Just make sure you pick the right size hook for your particular frog and you should see a large increase in your hookup ratio compared to the stock hook.