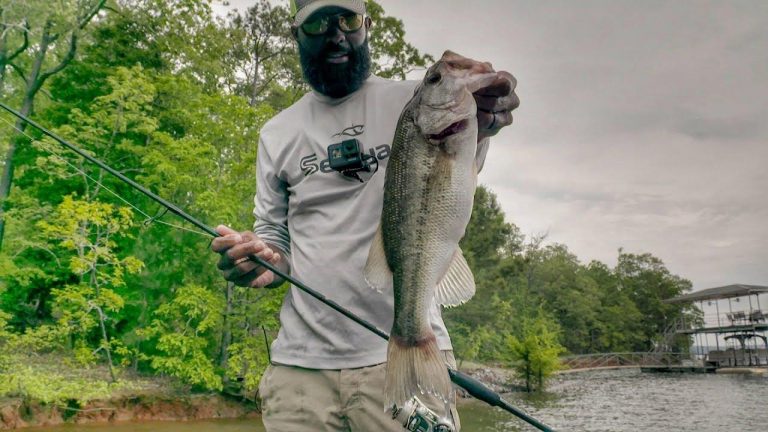 Bedding bass will no doubt try to remove any invader from its space but won’t stray much beyond the bed itself. The challenge for the angler is to make precise casts to likely areas then actively work a bait without moving it far. Pro bass angler Brian Latimer ventures out on South Carolina’s Lake Hartwell to target spawning spotted bass.

The approach involves making short, targeted casts using a shaky head jig and worm combo — he works the bait in a small area, then terminates the cast if he doesn’t get bit in a few seconds. Fast and accurate short-range pitches are key to Latimer’s spawning program. Rather than using a braided mainline to a fluorocarbon leader, he opts for straight fluorocarbon. Thanks to its material properties, fluorocarbon deploys off the spool in a smoother, more controlled manner that can easily be controlled with your hand. This allows for more accurate casts and pitches; braid, on the other hand, tends to be wispy and more difficult to control. Additionally, underwater observation of baits fished on braid with a fluorocarbon leader show much greater lateral movements compared to baits fished using straight fluorocarbon. In short, Latimer feels the density and stretch of fluorocarbon keep baits in a narrow strike window and make fluoro a better overall tool for casting and working lures in spawning scenarios.

Brian goes on to share one of his go-to worms and jig heads for this technique. Interestingly, he prefers a smaller jig and hook, which provides more action upon the bait without reducing hooking percentages.