Fishing swim jigs was cool long before it was en vogue where I grew up bass fishing. We called it “winding” a jig back then. We had caught so many just reeling a big jig in after flipping that we started just “winding” the jig around and catching big ones. We had it to ourselves for a long time when I was growing up. But today’s swim jigs definitely make it an easier process.

I’ve been throwing the V&M The Pulse Pacemaker Swim Jig a bunch this year. Here are some of my thoughts on this relatively new swim jig created and literally crafted by the 2013 Bassmaster Classic champion Cliff Pace. In fact if you buy one of these jigs, there is a good chance Pace had a hand in actually making the jig for you. 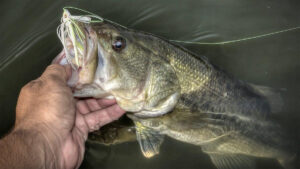 We call Cliff Pace the “bait whisperer.” The dude is an accomplished angler, but he’s an equally accomplished lure designer and maker. He has an elaborate shop at his home where he manufacturers mass quantities of lures. He’s adept at making hard balsa baits under his Black Label line but he also has developed a hundreds of jigs, spinnerbaits, terminal tackle, plastics and more. Dude is a relative genius when it comes to understanding hook angles, line ties, wire diameter weigh balancing and more.

He took a lot of knowledge and trial and error from both the fishing side and manufacturing side and put it into this V&M The Pulse Pacemaker Swim Jig. One of the critical elements of Cliff’s designs are the shapes of the various heads in his Pacemaker line of baits. On The Pulse Swim Jig, the head has a flat and rounded bottom that shapes a flattened wedge if you will. What that does is as you contact a piece of cover the bait won’t tip forward or roll up sideways. Instead it will angle over and then come up and over the cover and then immediately right itself in open water.

The skirt colors are excellently crafted, the recessed line tie keeps it from grabbing on weeds as easily and the hook keeper kept plastics snugly attached to the jig. 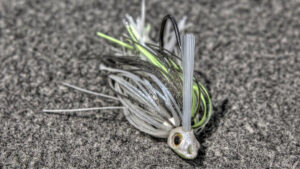 A swim jig can be a very versatile lure. I’ve swam The Pulse shallow around laydowns, through shallow bank grass, down the sides of docks and under walkways, over deeper hydrilla, around isolated stumps and even over the tops of mats. Interestingly enough. I’ve caught fish on this swim jig on just about every one of those areas. The linetie angle and the length and diameter of the hook has lended itself well to many solid hookups with both braid and fluorocarbon.

In fact the only memorable miss I’ve had is when a 4 pounder rolled on it under a dock walk way about 8 feet from the boat and I set the hook too hard and broke my 15-pound fluorocarbon on the post he was around.

You don’t have to be an expert angler to catch fish on this jig. Put a kicking trailer you like on there that somewhat matches the jig, throw it around some sort of cover and just give it a steady reel or slow reel popping your rod tip up to make it “pulse.”

You can check the V&M Cliff Pace Pacemaker The Pulse Swim Jig online at TackleWarehouse.com and also at BayouOutdoors.com. 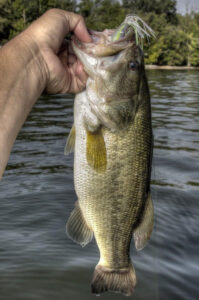