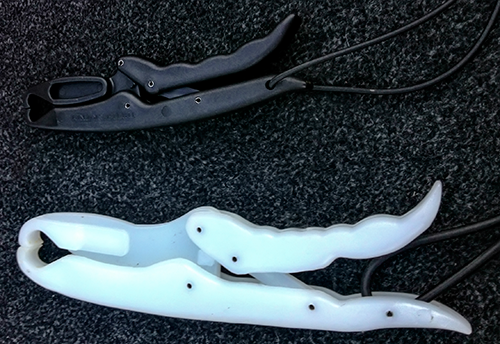 Occasionally we get products sent to us to try that we sort of look at with our head cocked to the side scratching it for a second, unsure if something is worth our time.  But when we use them, we find a use for it and question why we didn’t have one sooner.

I got the United Plastic Molders Fish Grip in the mail along with a few of their other products from the owners of the company. They asked me to take a look at them and tell them what I thought.

I had seen the Fish Grip Jr. on Major League Fishing. The anglers would grip the fish, hang the grip on a Berkley scale and then record the weight of the fish and release them.  I thought it was a pretty good system in that you could quickly grab a fish without putting a hole in its mouth and weigh the fish quick and easy and get them back in the water fast.

Honestly I’m a hand lander when it comes bass. I hardly ever use a net unless I think the fish is 6 pounds or bigger. And I’m usually dancing and dodging treble hooks from topwaters and crankbaits hanging sideways in a bass’ mouth.
https://s3media.247sports.com/Uploads/wired2fish/2013/07/fish-grip-and-fish-grip-jr.png

Nitty gritty on the design

The Fish Grip Jr. is made by a couple of avid anglers who started making products to solve common problems they faced on the water. It’s made of a durable plastic, comes in a variety of colors and retails for $10.99. They make a larger size, the Fish Grip that would probably be good for those toothy critters our northern friends have to deal with often. All the grips are made in the USA in Mississippi.

The design is patented and works extremely well. I test clamped it on my hand and it was tight but not excruciatingly painful. Heck I think you might even have a way to get your lures back from turtles and snakes now (not that I’m advocating that here).  It has a hole for a lanyard but you can remove it and hang it on a hook to weigh it. They say to deduct 5 ounces if you weigh them with the grip.

Why you will want one

I grabbed a few fish with the gripper and it worked as stated with an easy open and locking close jaw that held the fish tightly but not forcefully. But it wasn’t until a hot night of crankbait fishing that I really understood the Fish Grip Jr. I was catching them every cast, and the thing that was slowing me down was trying to get a bass to be still and get a hook out of its jaw so I would have some place to hold it. I finally picked up the Fish Grip Jr.

I locked it on the first bass who had both trebles in his upper and lower jaws. I clamped on the grip, grabbed pliers and in 5 seconds had the fish unhooked and loose without worrying about a treble in my hand. After that I grabbed them all with it and went on to boat 22 pound limit in short order.

I take my 10-year-old son fishing a lot, and the idea of a kid with a big bass and a lot of treble hooks is unnerving. Plus they float. So if he drops it, no problem. And they even make them in glow in the dark plastics so you can find it easy at night. Very handy and well thought out by obviously avid anglers.

To order one, your best bet is direct from their website, thefishgrip.net. I imagine they will start showing up in retailers sooner than later because it’s going to be pretty handy for folks who guide, fish with lots of people, or catch a lot of fish on treble hook lures.