I could start this review by talking about how effective small worms can be in bass fishing. But I’ll save you the time, because we have lots to get to. In short: I believe every angler should have a few packs of these worms. My reasoning is simple: They work. I have not been fishing without them in over 10 years.

Here’s why I’m such a big believer in ‘em. 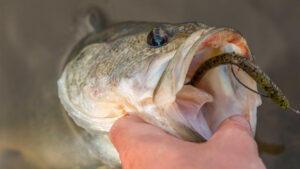 It’s hard to fish a Zoom Finesse worm incorrectly. As a result, it’s one of my go-to baits when I have inexperienced anglers in my boat. It’s a scaled-down Trick Worm and it can be fished just about anywhere.

Thread it on a 2/0 or 3/0 light-wire EWG hook with 8-pound line and it has a similar action to the original Trick Worm. Make long casts or skip it underneath cover and twitch it just under the surface to coax suspended bass. When you see the fish boil on it, don’t get in a feeling contest with it. Set the hook quickly and you’ll catch a lot this way. Spring and early fall are great times for this technique.

I use the Finesse Worm a lot when I’m casting a shaky head to deep brush piles. It’s slender and small, so it comes through the limbs easily. I’m usually fishing like this when the bite is tough in the summer and winter months, so its small profile produces a lot of bites. The bass also tend to suck it in on the first attempt, resulting in very few short-strikes.

When the bass start hanging out in the deep drains and ditches during the winter and summer months, I can usually catch ‘em with a Zoom Finesse Worm rigged on a Carolina rig. I like this smaller, 4 1/2-inch size because it gets bites. I catch my fair share of small keepers with this rig, but it doesn’t discriminate against 4 and 5-pounders, either.

I’m not crazy about drop shotting, but I’ll do it when I have to. Admittedly, I’m not an authority on this technique, but this worm seems to work just fine for it. Even when nose-hooked, you can usually catch a few bass on a single worm and it has a very fluid, lifelike action underwater.

The number of fish this catches will surprise you. We usually think of dense stick worms with this technique, but don’t be afraid to stick a 2/0 VMC Neko Hook through the middle of a Finesse Worm. It sinks slower than most of the stick worms, but it has a lot of action. You can even insert a nail weight to increase its rate of fall.

Fishing gets expensive and the high prices can intimidate a lot of would-be anglers, so I have a major appreciation for affordable fishing gear. Lower prices get people involved.

The Zoom Finesse Worm is priced at $3.79 per 20-pack and it’s not uncommon for me to catch four or five bass on a single worm. The math speaks for itself. Whether you’re a bank angler or a regional tournament angler, it’s tough to beat this type of value. 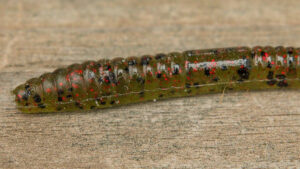 The color lineup is equally impressive and has options for just about every scenario. You can choose between 52 colors and mimic nearly everything that swims. The colors are well done and lifelike and the flake is consistent in each bag.

It’s a solid all-around worm that’ll catch fish on just about any rod you have rigged. That’s why I carry them so often—because they’re simple, inexpensive and they catch lots of bass.

The Zoom Finesse Worm is available at TackleWarehouse.com.