I’ve tested a lot of bladed swim jigs over the years. More times than not, I’m able to tell within just a few casts whether or not they’re any good. There are several different features I look for when conducting my tests and as it turns out, the V&M Pacemaker Lightning Blade has many of them.

Below are my thoughts on it. 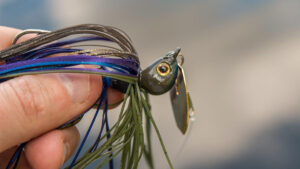 The V&M Pacemaker Lightning Blade was designed by 2013 Bassmaster Classic champion Cliff Pace. He’s a renowned tackle tinkerer and has a reputation within the industry of being a big-time perfectionist.

The design focus of this bladed jig centers around its hookup ratio. It’s hard to use a trailer hook on this type of bait due to the use of bulky soft plastic trailers, so lost fish can be a real issue. You’ll get a lot of short strikes on most bladed jigs. 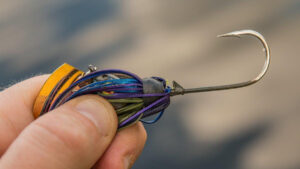 Pace’s V&M Pacemaker Lightning Blade is designed with a long-shank Mustad hook that sits a healthy distance from the head of the lure. In theory, the longer hook has a much better chance of hooking hesitant bass and keeping them hooked when fighting them through thick cover.

The colors are certainly impressive. Anglers have 12 colors from which to choose and they’re very lifelike and detail-oriented. You’ll be able to easily imitate bluegill, threadfin shad, gizzard shad and perch with the current color lineup.

The realistic color schemes were the first thing to catch my eye when testing the V&M Pacemaker Lightning Blade. Bluegill are a major bass forage in my area and I’ve had a difficult time finding a bladed jig that imitates them well. In my opinion, V&M’s Blue Gill color is a near-perfect match. 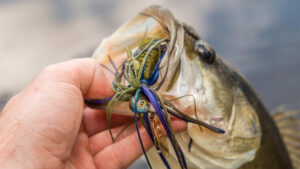 The split ring and line clip are super tough, which is a big deal to me. Bladed jigs are big producers when fishing submerged vegetation and when you’re wrenching on ’em with 65-pound braided line, the terminal tackle has to be able to handle it. I’ve caught several fish on this lure and pulled and horsed them as hard as I could and everything has held up wonderfully.

Anglers will really like the amount of flash and vibration. On a medium-heavy rod, you’ll be able to feel the vibration up to your elbow throughout your retrieve. The skirt has an attractive pulse to it and further adds to the realism. 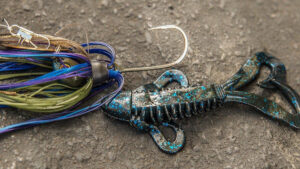 I’m a big fan of the long-shank Mustad hook. It has not caused any increase in hang-ups, but it has allowed me to catch every single one of the bites I’ve had. This longer shank also allows for larger trailers (the V&M J-Bug is pictured) which can be a big advantage in dirty water. The trailer keeper does its job well, as you can skip this bladed jig without worry of it sliding down the shank.

The V&M Pacemaker Lightning Blade also comes through cover well. Its head is somewhat blunt, which allows the jig to roll up and over hard cover with ease.

This jig will, however, rise to the surface if you retrieve it too fast. If you’re not fishing within a foot or two of the surface, you can combat this issue by sticking with the 1/2-ounce size. I’ve been using a 6.3:1 ratio reel and with a moderate-slow retrieve, I can keep it down deep enough without any issues. If you generally fish your bladed jigs slowly, this shouldn’t be a big issue for you.

It’s a beautiful bladed jig with a reasonable $6.99 price point. It will certainly be a producer in clear water thanks to its detail. If you like to slow-roll ’em around shallow cover, you’ll become a quick fan of this lure.

The V&M Pacemaker Lightning Blade is available at TackleWarehouse.com.