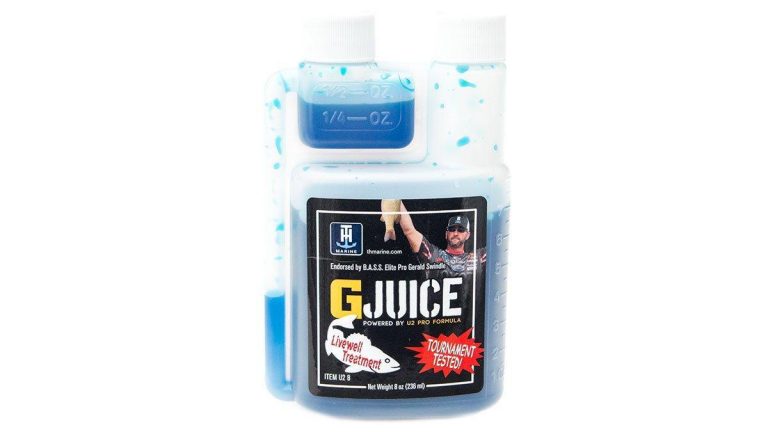 I take fish care very seriously. Because both my favorite hobby and career rely on the preservation of this great sport, I’ve always gone to great lengths to take care of my catch. There have been several tournaments I haven’t fished due to livewell issues in my boatâ€”it’s simply not worth the risk to me.

I’ve been using T-H Marine G-Juice Livewell Treatment for the past year each time I’ve put a bass into my livewell. I got tired of the granulated powders and decided to give this product a shot after hearing rave reviews from my fishing friends. I wanted to see the results for myself to determine if this was, in fact, an effective and safe treatment for bass.

Fast-forward to today and this bottle has not left my boat. I keep it in my glove box throughout the entire year, regardless of the water temperature or the fishery.

Since I started using T-H Marine G-Juice Livewell Treatment in January of 2014, I have not lost a single fish in my livewell. Feel free to ask any of my tournament partners or co-anglers. I don’t have any fancy oxygenator or anything, either. Just a standard 1999 livewell. That’s as good of a testament as I can possibly give someone, but I’ll delve a little deeper for a minute.

There are three things you don’t want in your livewellsâ€”ammonia, chlorine and nitrates. All of ’em can potentially spell bad news for bass. Now, I’m not a scientist but I’ve talked to biologists that have found stressed bass to excrete ammonia which, in turn, can affect the rest of the fish in a livewell.

I’ve heard a few people talk about it over the yearsâ€”they had one fish that wasn’t doing looking too hot in the same livewell as the rest of their catch. After less than an hour, all five fish were dead. Distress spreads quickly in livewells and it’s our job and responsibility to stop it from happening in the first place.

While using this treatment, however, I haven’t even noticed the slightest sign of distress from a bass. It doesn’t matter whether the water temperatures are in the high 80s or low 40sâ€”they retain their slime coating excellently and are insanely aggressive when I remove them prior to weigh-in. My hands don’t appreciate it because they’re constantly shredded, but I can deal with that.

If you fish tournaments, you’ve probably heard your catch acting a fool in your livewell throughout the dayâ€”you’ll be flipping a dock and it sounds like an all-out war has started in your livewell. People often mistake this as a good sign as it’s thought to signify active, healthy fish, but that’s not the case. Those fish are stressing themselves out over time and removing their slime coats.

T-H Marine G-Juice Livewell Treatment has significantly decreased the amount of “knocking around” in my livewells during tournaments. They’re perfectly still and content during the day and seem quite calmâ€”until I try to weigh ’em in, at least. 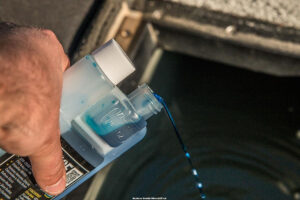 No matter how highly we regard ourselves when it comes to fish care, bleeding fish are bound to happen. The good news is, there are ways to stop it that allow the fish to recover quickly.

For whatever reason, tongue-hooked bass can bleed like a stuck pig. I truly don’t know why it happens, but whenever I see a treble hook in the tongue of one of my bass, I stop what I’m doing and go into emergency mode. It doesn’t take much blood loss to adversely effect a bass’ health.

This treatment, however, truly works wonders on bleeding fish. Some folks suggest pouring soda or other concotions onto the wounds, but I feel much more comfortable using a formula that has been tested for 15 years.

If I catch a “bleeder”, I’ll actually squirt just a small amount of T-H Marine G-Juice Livewell Treatment into its mouth and within a minute or two, the fish is back to normal and totally healthy in my livewell. I’m a diehard crankbait fisherman, so this stuff gets some major use in my boat. 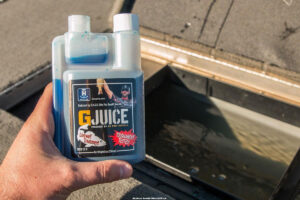 There are two different ways to look at fish puke in my opinionâ€”it can cost you important ounces in a tournament situation and it can be a result of stressed-out bass. Both of these are bad things. As interesting as inspecting a bass’ diet can be, I avoid it at all costs. Remember, we need to take care of ’em.

To the best of my knowledge, I’ve only had maybe three half-digested crawfish show up in my livewells since January of last year. I’m not raking regurgitated bass forage out of my livewells anymore which, in conjunction with lost fish in the past year, tells me this treatment is doing what it needs to do.

Simple and convenient to use

A lot of the granulated livewell treatments I’ve used in the past have been an absolute pain in the butt to deal with. You’ll go to pour a small amount into your livewell and a giant clump plops into the water. Not to mention those random clumps that fail to dissolve over the course of the day and gunk up your pumps and livewell walls. I can recall several instances in which I had to wipe congealed livewell treatment out of my boatâ€”not a fun way to spend the evening.

I’ve really enjoyed the convenience of T-H Marine G-Juice Livewell Treatment. It’s liquid and the bottle’s design allows you to precisely measure how much you’re using which saves money in the long run. It only takes 1/2-ounce to treat 30 gallons of fresh water. It doesn’t seem like much, but it does the trick quickly. I’m able to add it to my livewells in about five seconds, which gives me no excuse to not use it.

I don’t like to use the term “must-have” in my product reviews because everyone has different preferences and opinions on things. But I think I’m going to say itâ€”if you’re a tournament angler, I believe this is a must-have in your boat. It costs $9.99 and it flat-out works.