Anglers often disagree on whether or not bass actually rely on worms as a primary food source. I’ve never interviewed a bass or swam with them, so I can’t really chime in on that discussion. But it doesn’t really matter to me, because one thing is certain—soft plastic worms have caught bass longer than any of us have been alive and continue to produce great catches to this very day.

Due to the effectiveness and massive popularity of these long, slender hunks of plastic, the market is inundated with them. I’ve tried a lot of them over the years and not many of them have really knocked my socks off. How many different ways can you possibly imitate a tube-shaped, segmented creature?

Throughout this past year, however, the Strike King Rage Tail ReCon Worm has worked its way into my soft plastics arsenal in a pretty significant way. I started experimenting with it when the bass were predominately shallow and it continued to catch ‘em as they moved to deep, offshore structure and cover.

There are three primary factors that have made this bait a reliable, year-round option for me.

Its action is both subtle and dramatic

Finding middle ground can prove quite difficult when selecting an effective soft plastic bait. It seems as if you’re often left with two choices—lots of erratic action or hardly any at all. Both of these categories have their time and place throughout the year, but what if the bass don’t really prefer either? There aren’t too many baits that offer an “in-between”.

The Strike King Rage Tail ReCon Worm has a very unique action that’s quite interesting to watch in the water. When you take one out of the package, you’ll notice a long, ribbon-like flap that begins halfway down its ringed body. This flap seems to slow the rate of fall on slack line while also fluttering and gently rippling as it falls to the bottom. The soft, slender body-section of this worm barely shimmies on the fall as well, contributing to its unique and enticing action. 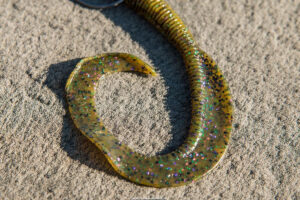 The subtleness of this bait stops when you get to the tail, however. The last inch of the worm is adorned with a thick flange on each side, which causes the bait to thump aggressively when dragged or swam. It might look a bit awkward upon first glance, but it complements the rest of the bait surprisingly well.

This non-traditional design has bailed me out of some really tough days of fishing this year. When it gets tough and I’m struggling to get a bite, I feel like I can keep this worm in my hand and give myself a legitimate shot at catching both big and small bass. It’s not going to spook a curious suspended bass as it slowly falls past their nose, but it’s enough to draw some very aggressive reaction strikes when worked on the bottom.

It’s a fairly meaty worm but even in the colder months when small profiles often shine, the ReCon Worm continues to produce bass of all sizes for me.

You can rig it a number of different ways

I’ve had an awesome time experimenting with this worm throughout the entire year. With just a few rigging variations, it has proven effective in both 100-degree temperatures and below-freezing temperatures on my home fishery. Due to the unique design features I discussed, it gives you a lot of options when the bass aren’t cooperating.

Soft to the touch

If you were to close your eyes and I handed you a Strike King Rage Tail ReCon worm, I’m willing to bet you’d think it was a real earthworm. Again, I don’t know if big bass roam around looking for earthworms but I do believe this soft feel plays a role in my great hookup ratio.

I’ll be honest—this isn’t the most durable worm on the market. You’ll probably catch three, maybe four fish on each one. But in my opinion, the hookup ratio makes up for its lack of durability. It holds a hook fairly well and when a bass bites, the hook penetrates the plastic quickly and efficiently without a huge, sweeping hookset.

I also think the softness contributes to its great action as well—when you put it in the water, you’ll understand what I’m talking about. You might get a few tears and rips along after a few fish catches but personally speaking, I’m willing to sacrifice some durability for such an interesting profile and action.

If soft plastic worms bore you, take some time to experiment with the ReCon Worm. I’ve really enjoyed using it and you’d be hard-pressed to find my boat without several packs in one of the compartments.