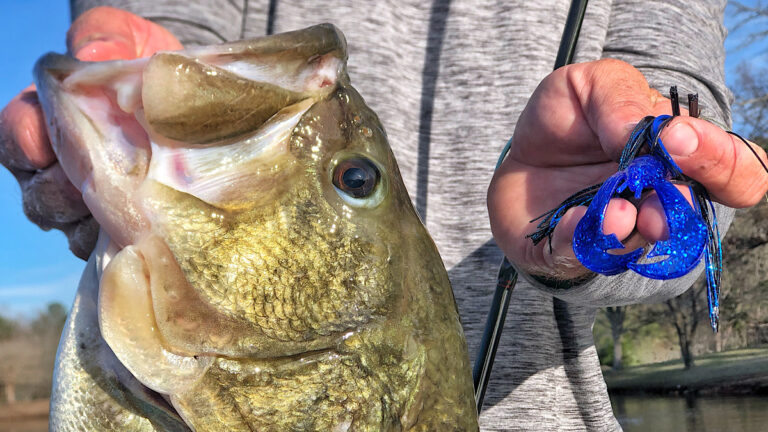 The Strike King Rage Tail Craw is one of the most effective, revolutionary and versatile soft-plastic bass fishing baits of all time.

It has been responsible for dozens of big fish catches for me personally that will stand out forever in my mind and hundreds more smaller bass along the way. And my experience isn’t unique, as this is a bait that many anglers rely heavily on. So today, we’re going to talk a little about some of the features that make this bait so good, some of my personal experiences with it on the water and a few different ways to rig it. Let’s get to it.

What’s the Rage all about?

The flanged design that is common across all the Rage Tail baits is what really sets this lure apart from other craws. Strike King created a whole line of soft plastics that incorporate a small raised ridge along some edge of the bait. This ridge is intended to catch water as it passes by, which in turn pushes on the flange. Then the water pushes that much harder on the opposite side of the bait where there’s a mirrored image of this same flange. This creates a back-and-forth force which causes that part of the bait to flap.

This is what is referred to as the Rage Tail part of this lineup of Strike King baits, because the flange is often on the tail of the worms and other soft plastics. On the Rage Tail Craw, however, the flange is on the tips of the claws which causes the claws to flap—and boy do they flap—more so than most other soft-plastic craws on the market. This was definitely true over a decade ago when the bait first came out and still holds true for the most part today, keeping the Rage Tail Craw relatively in a class of its own. 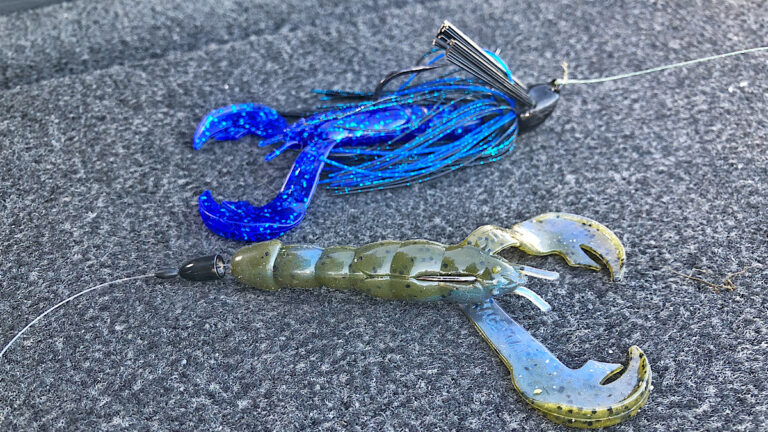 The durability of the Rage Tail Craw is also a key component to the bait’s success. The composition of the soft plastic is tough enough to keep it from tearing easily but also soft enough for the hook to escape and penetrate the fish. The point at which the craw meets the body was perfectly designed to allow for maximum action out of the claws while not compromising on the durability.

This cuts down on a bunch of lost pincers due to short strikes. The body of the bait also fits and holds up well to a 5/0 hook, making it great for pitching, flipping and dragging on a Texas rig.

But where this bait really shines, in my opinion, is as a trailer. You can rig a Rage Tail Craw as a trailer on just about anything you can think of; it’s likely the best football jig trailer of all time. It also works extremely well on a swim jig. You could even rig it on a vibrating jig, buzzbait or spinnerbait, especially if you were wanting to slow roll a black one at night or a white one in shallow, muddy water. With 40 color choices, there’s a Rage Craw to match absolutely anything you want to trail.

What I’ve seen out of this bait

A buddy of mine put me on using the full-sized Rage Tail Craw as a jig trailer years ago. That combo has been responsible for some of the biggest largemouth, spots and smallmouth bass I’ve ever caught.

I’ve caught big ones on it in clear water, stained water and muddy water… in five feet and 25 feet.

It’s absolutely, without a doubt, one of the best producers of a bite that I’ve ever fished with and one of the longest-running staples in my personal tackle box. There are a lot of good craws out there now but I just have a ton of confidence in the Rage Tail Craw and it almost always finds its way to the end of my line when I’m looking for a bait like this. The size, action, texture, durability and color selection make the Rage Tail Craw hard to beat.

Pairing the right Rage Tail Craw color with your jig

If you’re using this bait as a jig trailer, I like to match the colors of the craw and the jig most of the time. I’ll go with a craw similar in color to my jig basically anytime I’m trying to imitate a crawfish with a football, ball head, pitching or casting jig. When I’m swimming a jig around shad, I like to go with a similar color trailer to my jig too, both in white for instance.

If I’m using a swim jig around bluegill and bream I like to break it up, so I’ll use a green trailer with a black and blue jig for instance. This imitates the bright tail of bluegill well.

I’ll also break the colors up a bit when flipping a jig in muddy water, selecting something like a blue sapphire Rage Tail Craw to go on the back of a black and blue jig. I believe the contrasting colors catch the fish’s eye better in mud. But if I’m simply dragging a jig, I like for the trailer and Rage Craw to match so the whole package stands out better against the bottom of the fishery.

A Rage Tail Craw just flat out works. Strike King did a great job honing in on the exact dimensions necessary to create a durable bait that still has a ton of action. The Rage Tail raised flanges play a big part in that, creating more drag on the bait which in turn generates more action with less effort. This added force also allows for the potential weak points (like where the pincers meet the body) to be a little tougher and thicker, making the bait more durable overall.

I’ve fished this bait countless hours and it’s been instrumental in creating some of the longest-lasting memories I’ve had in fishing so far. I’m confident there are plenty more where those came from. If you haven’t yet, give the Strike King Rage Tail Craw a try and see for yourself what the rage is all about. I guarantee you’ll be glad you did.

The Strike King Rage Tail Craw is available at the following online retailers: