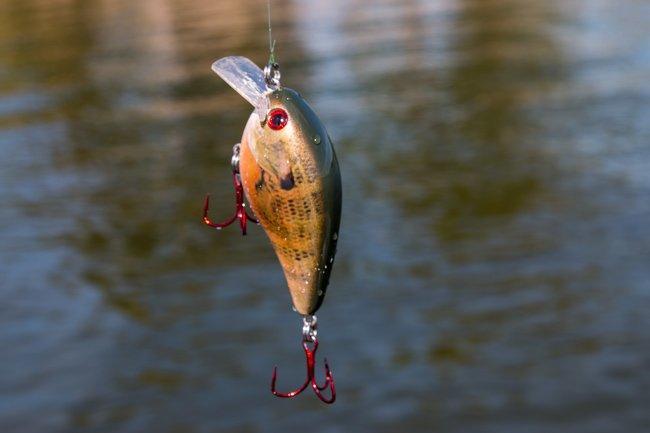 The big bait craze that catapulted onto bass fishing through swimbaits out west has bled into other categories the last couple of years. Oversized topwaters have proven to be very effective for big bass. And now it appears oversized crankbaits catch bass equally well. After watching Greg Hackney throw a big crankbait on Pickwick to win the FLW Tour event, I was pretty anxious to review the new Strike King KVD 8.0 Magnum Squarebill crankbait.

I live on the Tennessee River. It’s full of bass. But more importantly it is full of big forage. Big bluegills, big gizzard, Tennessee and Hickory shad, big herring and mooneye. There are lots of big things for bass to eat on this lake. So it makes sense that big crankbaits, swimbaits and topwaters play here often.

Anglers will consider several aspects of this new crankbait from Strike King, including the following:

When you start making crankbaits this big, weight can become an issue. Suddenly your soft moderate action crankbait rod feels unwieldy under the force of heavy lure. The KVD 8.0 Magnum Squarebill only weighs 3/4 ounce. I say only because other oversized crankbaits on the market weight up to 2 or 3 ounces. So this bait is big but not overbearing.

I used it on both a 7-foot, medium-power, moderate-action squarebill rod as well as a 7-foot, 6-inch medium-heavy-power rod and it fished pretty well on the former but I felt a little better on the latter. But it fished fine on 10-pound line and 12-pound line on both combos. I never felt like the bait was out of control on the cast.

I got one of the crankbaits at ICAST in July. It was the natural bream color. To be honest, I was less than thrilled with the color. But I gave it a fair shake nonetheless. After my fourth bass weighing more than 4 pounds on it in the first outing, the color grew on me a bit. Truth is the color is really good and mimicked what I believe the bass were feeding on in the areas I was fishing — bluegill.

Since then I’ve fished with the Sexy Blueback Herring and Sexy Shad as well. Shads, panfish, and tried and trues like Chartreuse Black Back are what you need in this crankbait. It’s not offered in crawfish patterns because it’s trying to mimic large forage, not lobster sized crawdads.

The crankbait comes with 2/0 VMC hooks I believe. These things are meat hooks. I caught fish on them. But I ended up switching to some 1/0 EWG Short Shank trebles. I think the stock hooks are fine, but I’m an EWG hook guy on square-billed crankbaits. I was happy that the EWG hooks performed very well on an oversized bait like this. One thing to keep in mind with these baits, they are big and give the bass a lot of leverage so you want to play the bass as such. Keep em down, keep your hooks tacky sharp and use a line and rod that will absorb the fight.

The action that kills

Everyone is walking down the sidewalk in a crowded city. You don’t really notice anyone as an individual. Then a gal with a loud shirt and bell bottom jeans and high-heeled boots comes strutting down the street, throwing her hips side to side and everyone on the street notices her. I picture a flat with stumps on it and bluegill just slowly meandering around hovering around the cover. Then suddenly a crankbait comes wagging through there with a wide track and the bass is put on guard.

I fished other crankbaits down a stretch as did my buddy. I tied on the KVD 8.0 Magnum Squarebill and caught 3 nice bass before we had a bite on any other bait. It could have been the situation, or pressure on the fish. But it seemed like something about that wider wobble really drew vicious strikes from the bass.

I ran into Sales manager for Strike King Crispin Powley this summer while we were both fishing the Jason Sain benefit tournament. Crispin was throwing a big crankbait. I gave him grief telling him how good we had caught them on other baits. He told me he had an 8-pounder in his livewell that said his bait was better. Turns out he did and he won the tournament, thanks largely to the KVD 8.0 Magnum crankbait. 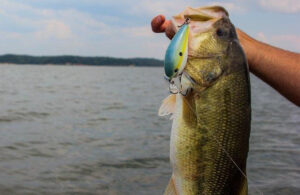 One concern I had with these baits was whether or not they would snag too much. I was pretty nervous about that actually when I was testing the only one I had. But I crawled them over big stumps, through laydown logs and even around grass and was able to get the bait back every time without issue. It crawled, bounced and backed off cover well and drew strikes from its contact with cover.

You want to be able to hit cover with a crankbait and it stay true as it deflects and bounces back to draw a strike after contact. Even with this bait’s larger-than-average size, the bait runs very well around cover.

I believe the bait is offered in 12 colors and retails for $12.99. It will dive to about 6 feet as near as I could tell. Maybe a little deeper on lighter line. But 6 feet was pretty easy with this lure. Because of that a good plug knocker will keep you from losing many.

I would say if your fishery has large forage in it, you might want to get a few and give them a try. I think you’ll be pleased with the results. You should be able to find them in October at most retailers that carry Strike King products and of course here at Tackle Warehouse. 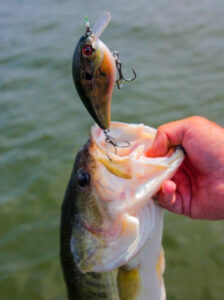