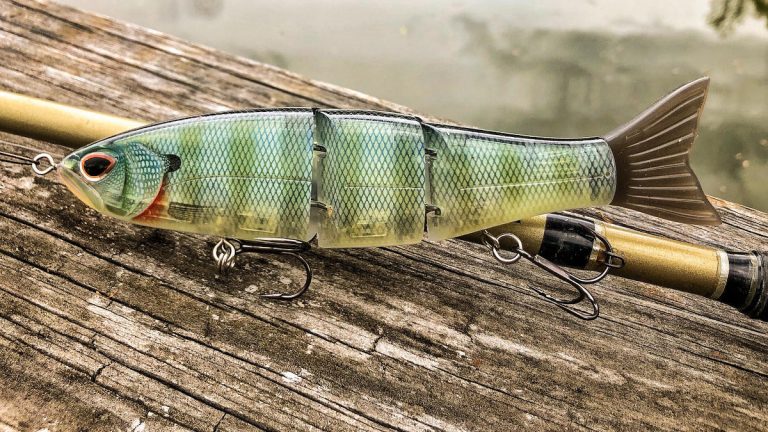 In the words of famed poet Sir Mix-a-lot’s 1992 classic, “I like big baits and I cannot lie”. Wait, that’s not how that goes… either way, I do like big baits. I’m not the best with them but honestly, that’s part of their appeal to me. They represent a whole new door of fishing that you can walk through and learn from. The main problem in the past has been glaring. A ticket to walk through that door has been pretty pricey.

In recent years, Storm and Brandon Palaniuk came together to offer up a quality big bait at a fantastic price called the Storm Arashi Glide Bait (AGB). A segmented, two-piece, 7 1/2-inch glide bait with awesome action and components for under $40. Now, some might still scoff at that price tag. But there are baits like it out there selling for 5 and 6 times that which certainly aren’t 5 or 6 times the bait.

Flash-forward to present day and Storm has now released their second big bait, the Storm Arashi Swimmer. At first glance, the two baits look quite similar. But upon further inspection, the Swimmer has two joints and three segments, it’s 1/2-inch shorter in length at 7 inches and it’s not quite as tall. But those are just the first few things to meet the eye. When you put the bait in the water, you really start to see the differences. Let’s look at some of those now. 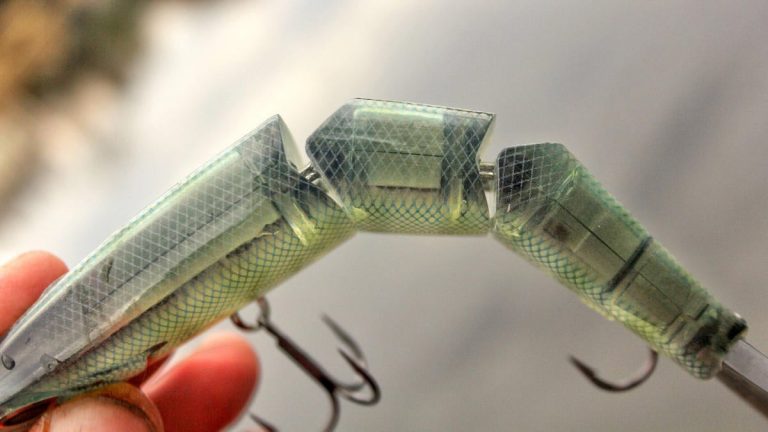 The Arashi Swimmer really is its own bait and not a member of the glide family at all. I simply wanted to mention the Arashi Glide at the onset because that’s the first thing I thought of when I saw the Swimmer for the first time. I imagine that was the case for many who were familiar with the bait’s predecessor. But where the AGB and other glide baits have a really wide side to side action, the Arashi Swimmer has a good bit tighter action.

The bait still swings wide compared to something like the wobble of a crankbait, which is often also described as having a “tight” action. But where a glide bait swings back and forth say 20 inches, the Swimmer’s action covers more like 10 inches. This allows for the bait to be worked a little faster and fished a little deeper than glide baits, but the action isn’t the only thing that contributes to those two characteristics. 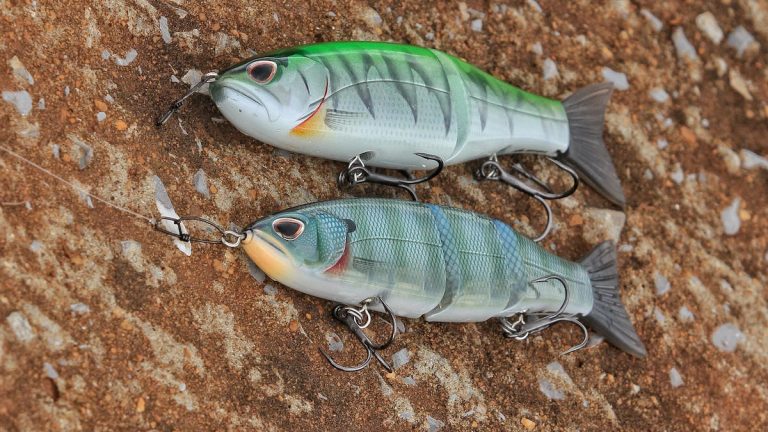 The rate of fall (ROF) of the AGB is ROF-4. That means the bait will fall 0.4 feet per second. The Arashi Swimmer has an ROF-8, twice that of the glide bait. So where glide baits are intended to slowly lumber along, just under the surface to lure big bass out from behind cover, the Arashi Swimmer is meant more for open water, windier days when you need a bait with a more aggressive action that can be used to target suspended fish that are more spread out.

The ROF of a bait like this is so important because it drastically increases or decreases the amount of work that has to go into using one of these baits to catch a fish. If you want to get your bait down 10 feet below the surface to target fish that are suspended, you would throw the Arashi Swimmer out and count to about 12 seconds, then start your retrieve. If you wanted to target the same fish with the AGB, you’d have to count to 25. And as soon as you start your retrieve, the wider-swimming AGB would be fighting to make its way to the surface. Where you could fish the Arashi Swimmer at the same speed and keep the bait down better.

Some things in common

There are a few things these two baits have in common. They are both available in the same 9 colors. They both come with clips on the line tie for increased action; the added bonus now is that the clips can be used to quickly swap between the two different-style baits. They also both come with round-bend VMC treble hooks, the Swimmer with 1/0 and the AGB with 2/0.
Each comes with a spare tail as well.

But the coolest thing the two have in common is their swiveling hook system. One of the biggest issues with big bait fishing is losing fish. A bass has so much leverage with a bait this size; once the fish breaks the surface, one hard swing of its head is often enough to send the big bait flying as the hooks tear loose from the fish’s mouth. Storm has mitigated this risk as much as possible by incorporating hook hangers that actually swivel. So now when the bass tries to throw the bait, chances are the bait will simply pivot at the hook hanger and likely even hook the fish with the free hook.