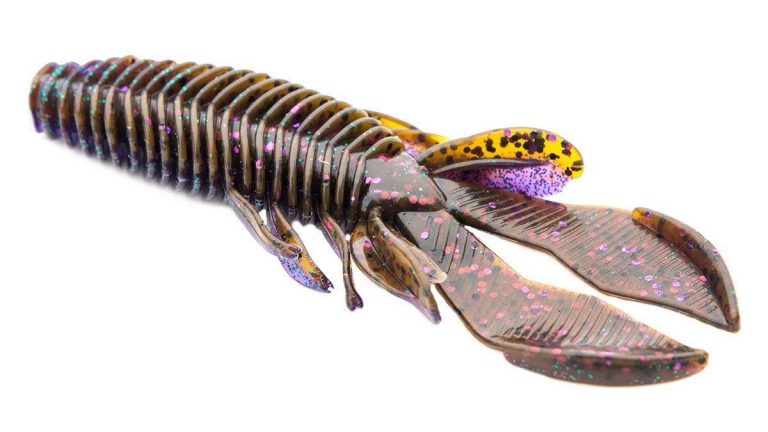 I always make an effort to keep my fishing simple. But as much as I’d like to say big bass will indiscriminately eat anything that’s green and wiggly, that’s simply not the case in most situations. So whenever a new soft plastic bait hits the market and spurs conversation within the bass fishing community, I go out of my way to test it and see what the fuss is all about. I want to see firsthand if various design features make a difference on the water.

I’ve heard a lot of chatter surrounding the Riot Baits Fuzzy Beaver, so I’ve spent the last few weeks putting it underneath every dock and into each laydown and grass bed I can find. After hours of experimentation and several fun fish catches, I’ve become quite fond of this bait whenever I’m pitching and flipping shallow cover.

In my opinion, it has several noteworthy characteristics.

Small pitching and flipping baits aren’t necessarily anything “new”â€”the market is flooded with them in order to meet the demand of shallow-water anglers. Measuring just 4 inches, the Riot Baits Fuzzy Beaver can certainly be categorized as a “small” bait, but that’s not actually the primary reason I’ve enjoyed using it in heavy cover.

When I first started using this bait, I was very impressed by how well it penetrated thick cover such as shallow brush piles and thick laydowns. I initially assumed its efficiency was due to its diminutive size, but upon further inspection in some really shallow and clear water, I noticed something pretty neat.

As it falls to the bottom, the side appendages stay completely pinned to the body of the baitâ€”they don’t flare and create a bunch of commotion. This allows the bait to fall through gnarly areas with the utmost of ease. I don’t have to shake or jiggle my rod tip to dislodge the arms from random obstructions.

When the bait reaches the bottom, however, the arms release themselves from the body and everything seems to come alive. The appendages spread and significantly increase the profile and action of the bait.

I’m quite impressed by this design feature, to be honest. A lot of the smaller pitching and flipping baits out there often force anglers to choose between a streamline profile and suitable action, but the Riot Baits Fuzzy Beaver delivers an attractive combination of the two.

We’ve all seen soft plastics with ribbed bodies. Big deal, right? They’re a fairly common sight these days. But this particular bait is a bit different.

The body of the Riot Baits Fuzzy Beaver is adorned with chevron-shaped ribsâ€”yes, I said “chevron”. For you young guys out there, it’s just like the patterns on all of the sorority girls’ dresses these days. Or the Chevron gas station logo. But whatever. Back to my pointâ€¦

These ribs trap air as the bait descends through the water column. When it hits the bottom and you start dragging, hopping or shaking it, you’ll notice tiny air bubbles being released with even the smallest movement of your rod tip.

I’ve enticed a lot of bites lately after skipping the Fuzzy Beaver underneath docks and simply shaking it in-place. I can’t help but wonder if its due to the bubbles created by this unique ribbed body. Either way, it certainly hasn’t hurt because I’ve been catching the fool out of ’em with this little dude. 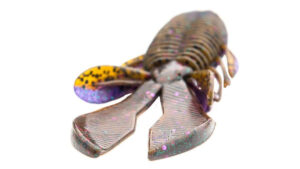 You can have a flipping bait with the sexiest-looking pincers in the history of mankind but guess what? They won’t do you a bit of good if they don’t do anything. They’re pointless if they just drag the bottom of the lake like a wet dish rag.

The Riot Baits Fuzzy Beaver is incredibly soft, which gives the entire body a lot of great-looking action underwater. But the most noticeable action, by far, lies in the pincers of this bait. I was extremely pleased to see how naturally they postured, moved and reacted throughout the retrieve.

I always want the pincers of my crawfish-imitation baits to remain elevated when the bait is at restâ€”no exceptions. When a crawfish feels threatened, it immediately raises its pincers and I want to mimic that natural behavior to the best of my ability.

The Fuzzy Beaver’s pincers stay elevated at a 45-degree angle at all times. They don’t just elevate for a few seconds before the bait teeters on its side, either. The balance of this bait is excellentâ€”it doesn’t fall over and become a crawfish with an equilibrium problem. I’ve spent a lot of time tinkering with it and whether you hop it, drag it or shake it, the bait stays upright and the pincers behave in an incredibly realistic manner. 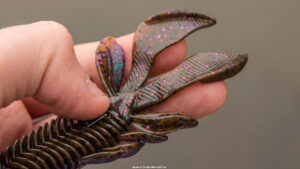 You’ll also notice flanges on the end of each pincer. Unlike many other baits, however, they’re offset. This means there’s one flange on the top of the first pincer and another flange on the bottom of the second pincer. This design facilitates a nice flapping action when you hop or swim this bait through the water. I haven’t noticed much flapping at lower “speeds”, but when you fish it aggressively with sharp hops, they kick back and forth like crazy.

Much more durable than you’d think

Ribbed baits often suffer from a severe lack of durability. It makes sense if you really think about it. The body isn’t as solid, resulting in frequent tearing, warping and shredding. So to say I was initially concerned about the Fuzzy Beaver’s durability would be a drastic understatement.

As it turns out, however, this is one of the more durable flipping and pitching baits I own. When you take ’em out of the pack, you can see for yourself. You can pull and pluck at ’em without any loss of structural integrity. It’s not at all uncommon to catch up to five or six bass with a single bait.

They also stay rigged quite nicely after repeated skips, flips and pitches. I’ve rarely seen the bait slide down the shank of the hook or expose the hook point. If you fish shallow water a lot, you’ll understand the convenience of this characteristic.

I have really enjoyed fishing with the Riot Baits Fuzzy Beaver lately. Its unique features, softness and buoyancy have turned me into a big fan. If you like the fish the nastiest cover on your body of water, I’d absolutely recommend trying ’em out.

The Riot Baits Fuzzy Beaver is available at TackleWarehouse.com.