Whether you’re a weekend bank angler or a serious tournament angler, having a quality scale certainly makes life easier. There’s nothing wrong with eyeballing your catch to guess its weight, but there’s something cool about knowing the exact outcome of your efforts. Not to mention, you can put your friends’ trash talking to rest in a hurry.

I’ve been using the Rapala Touch Screen Tournament Scale lately with outstanding results. Whether I’m culling for a tournament or taking my girlfriend fishing, it’s a handy little tool that I refuse to go fishing without.

I love tournament fishing, but I’ll be honest—I’m not the world’s best culler by any stretch of the imagination. My process usually begins with unclipped culling strings littering the livewells, a crotch full of water and a misplaced culling beam and ends with me saying to my partner, “Screw it. Which one looks bigger?”

Since getting this Rapala Touch Screen Tournament Scale, my culling efficiency and accuracy has increased tenfold. I clamp the fish on the scale, store the weight and place it in a numbered “bin” on the screen. As I fill out my limit, I keep them marked with the provided numbered culling strings, allowing me to instantly know which fish to release. When I cull a fish, I simply replace its weight with my new bass’ weight while the scale automatically updates your total catch weight.

It’s as simple as that. I believe this scale will help you make your culls in under 10 seconds easily. 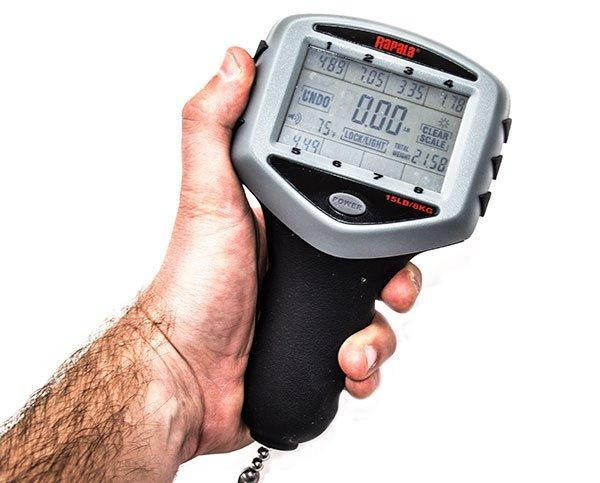 Most of the scales I’ve used in the past have been very slender and tough to grasp—especially with fish slime on my hands. When you spend the money on a nice scale, the last thing you want is to have it fall into the lake. Trust me, it’s happened to me three times.

The Rapala Touch Screen Scale is extremely easy to grip, regardless of the conditions. The wider screen portion of the scale not only makes it easier to read your weight, but it also makes the unit less likely to slide out of your hands. The plastic grips have a very course texture, ensuring a solid grip at all times.

I’m not going to type out the entire instruction manual, but if I can work this thing, I guarantee you can. It has a very intuitive design that makes proper operation easy, even in time sensitive tournament situations. Hold down the “power” button to turn it on—obvious, I know—weigh your fish, press the “lock” button and select the numbered bin in which you’d like to store the weight. Unclip your fish and you’re back to zero.

It will probably take you about two fish to get used to operating this scale. When you first take the scale out of the package, you can read through the provided instructions if you want, but you’ll learn a lot faster by turning it on and trying it out. If you forget how to operate it while you’re on the water, don’t worry—Rapala has sewn the operating instructions into the storage bag.

Easy on the fish 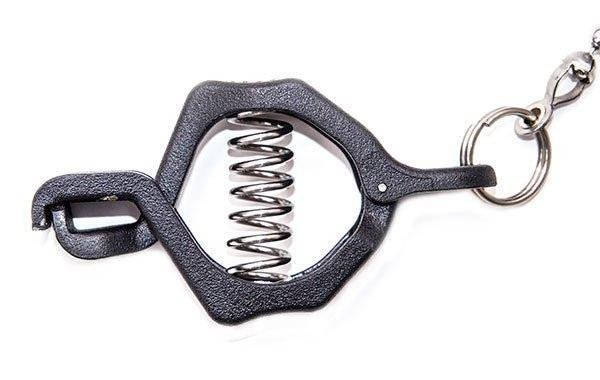 I’m not a big proponent of scales that poke holes through the bass or rake a big hook across their gills. I’ll never claim to be a biologist, but I can’t imagine it’s good for them. After using this scale for a while, I believe it’s very easy on the fish.

Before weighing your fish, all you need to do is clamp the bottom jaw of the bass and hold it directly vertical. Don’t jack its jaw or anything—just make sure it’s straight up-and-down. The clip is extremely strong and doesn’t bend or flex over time. I’ve checked the mouths of every fish I’ve weighed with this scale and have seen absolutely zero signs of physical damage.

How many times have you caught a giant bass only to find your digital scale dead as a doornail? For me, it seems like I only catch big ones when my scale isn’t working.

I’ve left  the Rapala Touch Screen Tournament Scale turned on for long periods of time and weighed a lot of fish with it so far and the batteries are still going strong. It takes two AA batteries which are not included, but once you get ‘em in, they’re going to last. Rapala claims the batteries last up to 400 hours and if you do the math, that’s 50 eight-hour tournaments. Not too shabby in my opinion.

Whether you’re tired of eyeballing your fish and arguing with your buddies or you’re at your wit’s end with slopping culling, consider giving the Rapala Touch Screen Tournament Scale a try. It’s priced at $46.99 and will make your life a lot easier.

The Rapala Touch Screen Tournament Scale is available at these online tackle retailers: