I always think it’s interesting to experiment with different fishing reels and manufacturers. Some companies try to make their reels the lightest on the market while others have a reputation for designing pure workhorse reels made to withstand anything imaginable.

To be totally honest here, I wasn’t too familiar with Pflueger’s modus operandi until recently. I had always heard great things about them, but aside from winning a handful of old Pfluegers in tournaments years ago, I’ve never had a chance to fish with them extensively.

After using the Pflueger Patriarch XT Casting Reel for well over a month, I am slowly becoming addicted to it. It’s a unique reel in several ways and I can comfortably say that it performs at a much higher level than many of the more expensive reels I’ve tried over the years.

Here’s what I think you need to know about it.

It’s lightweight, but with a little more meat on its bones

It’s incredibly difficult to appreciate a ultra-lightweight reel until you’ve fished with one. I know you can go buy a $40 casting reel and get by with it, but a 5.7 ounce reel such as the Pflueger Patriarch XT is in a whole different ballpark.

No doubt—this is a really lightweight reel. It’s comfortable to use from sunrise to sunset and it totally changes the balance of your rod and reel combo. My hands and forearms feel excellent when I come off the water after a long day of guiding or tournament fishing. It’s hard for me to overstate the advantages of a lightweight reel.

But perhaps the thing I like most about this reel is its profile and size. I own a lot of casting reels in the similar weight range and the Patriarch XT might just be the most comfortable one in my collection. To reduce weight, a lot of companies make their reels tiny. It’s cool if you can palm a reel, but man—I’m just one of those guys who has to have something a little more to hold on to. I want a reel with some meat on its bones. I have big hands and I’d rather not feel like I’m using a youth-model reel. 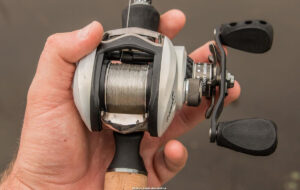 This is a 6.4:1 reel, so I’ve been using it a lot lately for bladed swim jigs and crankbaits. When I have a 6-pounder digging to China at the side of the boat, I feel totally in control of the situation when using this reel. There’s no torque at any point in its aluminum frame and again, I have a lot I can grab ahold of during the fight.

To be clear, this isn’t a larger casting reel you’d see in blister packaging at the sporting goods store. It’s a low-profile reel with a slick look, but it doesn’t look as lightweight as it really is. If you ever end up purchasing one, I’m willing to bet you’ll take it out of the box and be fairly shocked by its weightlessness.

It has a good temperament

Sounds weird talking about a fishing reel that way, doesn’t it? But chances are, you know exactly what I’m talking about. We all have those reels that, after each cast, we’re constantly turning dials and giving perplexed looks—we look like we’re trying to operate a spaceship more so than a fishing reel. No matter what you do, you cannot get the darn thing to cast right.

I actually run into this problem more frequently with high-end casting reels. Some manufacturers “hot rod” these reels so much from the factory that they’ll send your bait shooting through the air like a missile before your thumb even has a chance to think about managing the spool.

A lot of folks get all riled up about casting distance. Okay, your reel casts 10 yards further than mine. But what good does it do if you’re always picking loops out of your line? 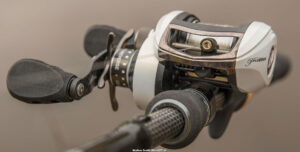 In my opinion, I believe the very best fishing reels promote efficiency. That means a fine balance between casting distance and line management. And the Patriarch XT strikes that balance incredibly well. It’s an absolute joy to cast whether you’re fishing on a slick day or facing 20 mile per hour headwinds. You can dial it in quickly and leave it there—it’s not a finicky reel by any means.

I’ve found myself making stupid, pretty much worthless casts with a vibrating jig just to see how far I can fire it. Some folks like ice cream and cookies—I like watching fluorocarbon scream off the spool of a casting reel.

In all seriousness, the castability of the Patriarch XT shouldn’t be ignored or overlook. Big kudos to Pflueger.

Increased line capacity is a major advantage of a larger low-profile casting reel. I’m not happy or comfortable with putting 60 yards of line on a reel. I want to pack it full and have room to play with. Think about it—you get a good backlash with barely any line on your reel and that reel is done for the day. Time to pay money for more fishing line.

The Patriarch XT holds 145 yards of 12-pound test, which I think is great. Without any trouble at all, you can pack light line or heavier line onto the spool and you’ll be good to go. 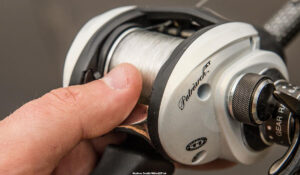 If I’m using a casting reel, my drag is cinched down as far as it will go. Call me crazy, but I trust myself to sense the real-time tension during a fish fight more so than an inanimate device. When the fish runs, I press the thumb bar and let her have some line. I’ve been failed too many times by subpar drag systems.

Due to my fishing style, I look for reels that have a strong drag system that will not slip. This reel certainly fits that bill. You can get hung on any brush pile, dock, boathouse or bird bath and pull until your heart’s content. It’s not going to slip under any realistic circumstance.

I’ve also been quite impressed by how easily the thumb bar engages. You’ll use a lot of reels with thumb bars that, when under a lot of pressure during a fight, will be near-impossible to engage to give the fish line. I have not had that problem with the Patriarch XT. It performs butter-smooth during the cast, retrieve and fight. 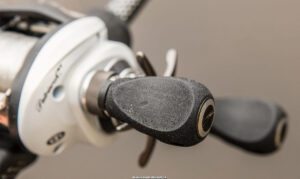 This reel will be on my Christmas list this year. If somebody doesn’t buy it for me, I will buy it for myself. I’m not crazy about the white color scheme, but who cares—fishing isn’t, or shouldn’t be, at least, a fashion show. That’s about the only “negative” thing I can say about it. I really like this reel and I will own more.

The Patriarch XT Casting Reel is available at TackleWarehouse.com and the Pflueger website.