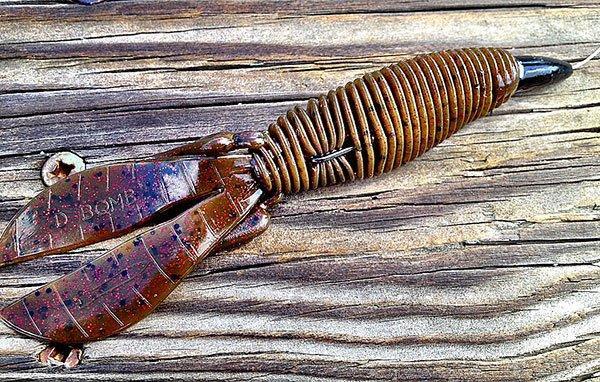 Nothing gets my blood pumping more than the solid “thump” of a big flipping bite, a huge hookset, hearing my line hiss through the water and swinging a big ol’ tank in the boat. I absolutely love flipping, so naturally, when I heard about the new Missile Baits D Bomb, I had to try it.

As I shut off my outboard and trolled to one of my favorite stump flats, I pulled out a bag of D Bombs to put them to the test. The first thing I noticed about the bait was its unique feel compared to most flipping and pitching baits on the market today. The D Bomb’s ultra-soft body and crawfish-like appendages felt slippery between my fingers, which proved very useful when threading it onto my Lazer Trokar TK130 Flippin’ hook. A lot of flipping baits tend to tear and get wallowed out when rigged, but the D Bomb slid up the hook shank flawlessly.

The 4-inch D Bomb comes in 10 no-nonsense colors, six baits to a pack for $3.99. It features a solid body with ringed ridges around it tightly spaced that give you a nice solid body for your hook point but soft rings for Tex-posing the hook. The plastic is very soft and sort of just drapes over your hand but really moves in the water. 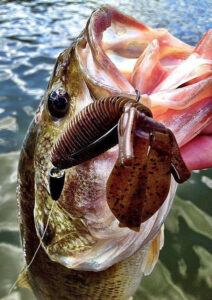 After a few initial flips to some shallow water stumps, I was impressed by how delicately the bait entered the water—comparable to that of an Olympic diver. Following a few quick hops on my third flip, I felt the textbook “thump” of a quality bass. Upon inspection of the bait, I was pleased to see all of the appendages intact, although the head was slightly torn.

The second keeper bass I boated on the same bait absolutely choked it. I was using the Green Pumpkin Red color and the fish loved it. The head of the bait, however, was torn away from the bait keeper on the top of the hook, so a brand new bait was definitely needed. No problem though, as the baits are a breeze to rig.

Since the D Bomb performed so well around the stumps, I found the nastiest, thickest, most gnarly brush I could find in order to really put it through the wringer. A few flips and a couple of 2-pounders later, I was again impressed by its fish catching abilities. After a few fish and the bait starts to tear, you’ll start to experience a few more snags. Just reach in and pull out another bait and you’re good to go again, a necessary sacrifice when using such a soft, lifelike plastic. 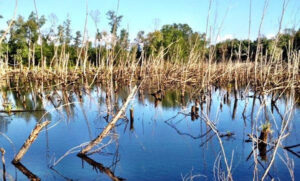 The D Bomb was designed to get the hook into the fish on every hookset, and that simply cannot be done consistently with some of the harder plastics on the market today. Although you may go through a few more baits and get snagged a few times throughout your fishing day, it seems to be well worth it for that hook penetration. Also, with such an attractive price point at $3.99 per pack, it won’t empty your wallet to grab an extra pack or two.

The D Bomb passed the grass-punching test with flying colors, punching through the vegetation and getting to the fish quickly and efficiently. No hang ups, and more importantly, no annoying grass strands to pick off of the bait between every cast. The oily coating of the D Bomb allowed it to slide in and out of the grass without any issue at all. That aspect alone is reason enough to give this bait a try.

To end my testing,  I needed to flip some docks with this bad boy. While some ribbed-bodied baits don’t seem to skip as well, the D Bomb was a pleasure to skip underneath docks. Just as a river rock skips across the surface of the water, the D Bomb quietly slipped under boat docks with ease. I was also happy to see that the abuse of the bait constantly skimming on the water’s surface didn’t rip the bait to shreds. It stayed perfectly intact, with no tears or loss of appendages.

At the end of the day, I was extremely impressed with the Missile Baits D Bomb. Whether you like to flip stumps, brush, thick grass or docks—this bait will do it and do it well. The baits are a little more fragile than some of the less-realistic flipping baits out there, but in this case the D Bomb’s fish-catching qualities and lifelike action make it totally worth it. If you’re looking for a new flipping bait that will catch fish in all types of cover, you need to check out the Missile Baits D Bomb.

To see more of the Missile Baits D-Bomb, visit Tacklewarehouse.com.