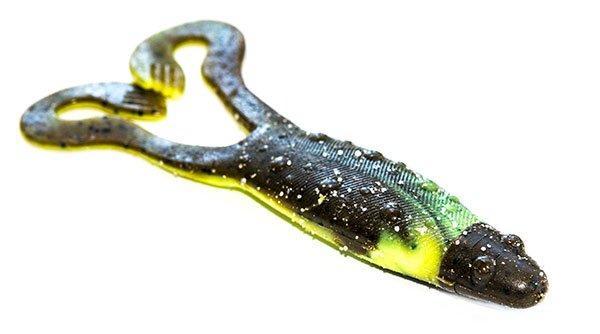 There are some baits and lures on the market that I often refer to as “sleepers”â€”they’re cheap, durable and catch a ton of bass, yet you never hear anyone talking about them. The Mann’s HardNose Swim Toad may be one of the biggest sleepers in my tackle collection.

I’ve fished with this soft plastic toad for years and it continues to bail me out of tough situations. Whether I’m using it as a topwater bait as it was originally intended or a bladed swim jig trailer, it provides me with an affordable way to catch big bass.

A lot of topwater soft plastic baits require a ridiculously fast retrieve in order to achieve the proper action. Many of them are very dense and heavy, so unless you’re burning it, they tend to run subsurface which significantly hurts your chances of getting bites.

The Mann’s HardNose Swim Toad, however, is extremely buoyant. Even when rigged on a heavy wire 6/0 hook, I’m still able to crawl it very slowly across vegetation and wood cover. This has proved invaluable for me over the years in tough conditions. Even when the sun gets high and the fish tuck into heavy cover, they’ll often explode on a slow-rolled Swim Toad. The longer you can keep it in the high percentage areas, the better your chances of drawing a huge explosion. 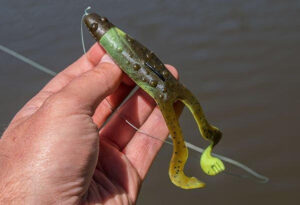 At first glance, the HardNose Swim Toad may not look like much. At five inches long and less than an inch wide, it’s hard to imagine it would draw much attention from a big bass. I believe, however, this slender profile helps me get more bites for two very specific reasons.

Very rarely do I fish topwater soft plastics in areas void of thick coverâ€”that’s what they’re designed for. But many of these baits are very prone to constantly getting snagged and hung up on small obstructions such as weed stalks and limbs. This happens because they’re too bulky. I don’t have this problem with the HardNose Swim Toad because it’s so thin. It cuts very well through the thick stuff and its slender nose section allows it to efficiently find its way through cover.

I also like its slender pattern because it allows me to give short-striking bass a second chance. As I discussed, I’m usually fishing the Swim Toad through some sort of vegetation, so when a bass blows up on it, I simply stop it. I’ll drop it in small holes in the grass without having to shake it or manipulate it through the grass. There are no extra appendages to impede its descent, allowing me to keep it around the bass at all times.

The major issue with a lot of topwater soft plastics is their inability to stay on the hook. The bodies will last through several fish catches, but it doesn’t take much for the head to start sliding down the hook shank. After skipping them under docks or ripping them through vegetation it gets very frustrating to keep them on the hook. 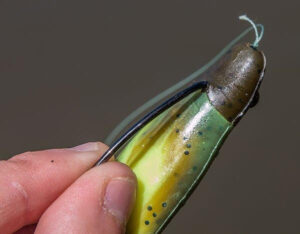 Like its name states, the HardNose Swim Toad has a very hard, dense head section. Regardless of the hook you prefer, it will not slide down the hook. It stays put, resulting in a lot of fish catches and no unnecessary re-rigging throughout the day. This keeps the body intact and allows you to catch dozens of fish with just one pack of Swim Toads. 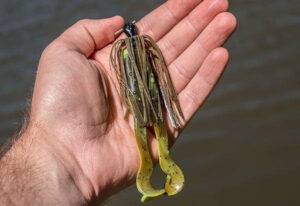 I absolutely love swimming the Swim Toad across the surface, but I’ve also found another excellent use for it. It’s one of the best vibrating swim jig trailers you can use. My old college partner and I actually won a really big tournament with this combination.

I’ll cut or bite the hard head section off the Swim Toad and thread it up the shank of my bladed swim jig’s hook. After a few drops of super glue to hold it in place, you’re left with a sexy looking trailer. As you reel the bladed swim jig through the water, the Swim Toad’s legs kick very violently, giving your jig a much larger profile that seems to work very well when you’re around really big fish. 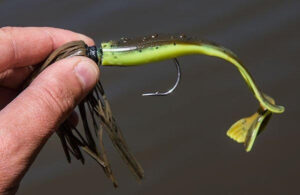 This also allows you to skip your bladed swim jig excellently across the water’s surface. I’ve had a lot of success skipping this combination under bushes during mayfly hatches and under docks during the middle of the day. When other folks are flipping and pitching jigs, you’ll be able to catch fish behind them with this setup.

If you like versatile soft plastics that can be used for a wide array of applications, I suggest checking out the Mann’s HardNose Swim Toad. They only cost $2.99 per 5-pack and I believe you’ll fall in love with them.