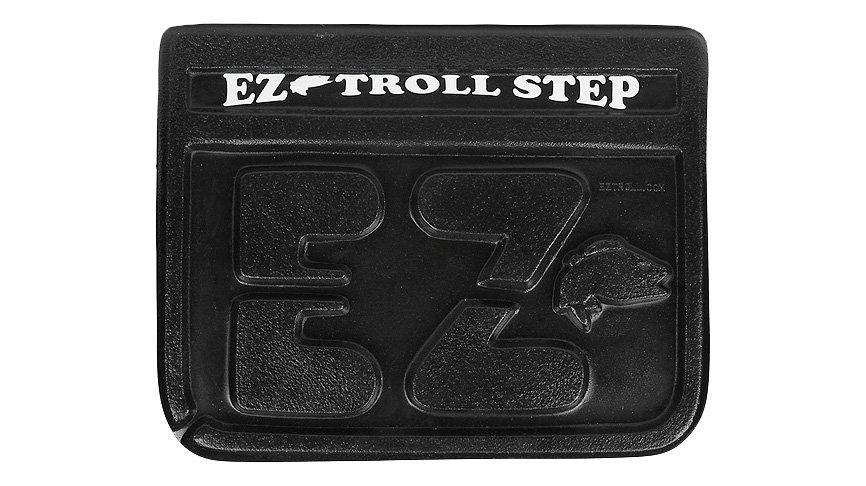 One of the toughest parts to the fishing day for those of us who are flexibly challenged is unloading and loading the boat. Bending over the nose of the boat, over the trolling motor and electronics, to hook up or release the tow strap, can be like walking a tight rope for some of us. My quality replacement parts don’t bend as easily as those God gave me. The EZ Troll Step solved a lot of problems for me.

After seeing several boats dropped on the ramp, it is my general practice to unhook the winch strap just before dropping the boat in the water and when pulling it out of the water. No exceptions. I learned a long time ago that hooking up that tie strap on both occasions takes a lot of angst out of the process and keeps my boat on the trailer. Getting to the trailer bow eye can be a bugger at times. I am always fishing around with my foot to find a secure place to step on the trailer when exiting the boat. Nothing is worse than falling into the water or slipping on the trailer and busting your shins on the metal edges.

Safety on the dock and loading and unloading the boat are often overlooked, but in my experience, that is where a majority of the accidents occur on the water.

My little 1999 Ranger 106 aluminum is a great boat for a lot of the small lakes I frequent but is not set up well for loading and unloading. The Ranger Trail trailer is awesome for carrying the boat and all its gear, but it’s slick as the dickens when it gets wet near the tongue. I had been looking for a solution for a couple of years when I heard about EZ Troll Steps. 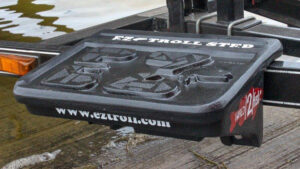 The features you will appreciate about the EZ Troll Step include the following:

The EZ Troll step is a rotational molded polyethylene plastic that fits on just about every type of trailer. The Ranger Trail trailer on this boat uses a C-Channel construction. The flexibility in the design of the EZ Troll step made it a snap to install. Two long bolts to tighten to the trailer and two bolts with lock nuts to keep it level were all that was needed. Just position the step in the best location, slide it over the rail, set the bumper bolts for correct level and tighten the long bolts to secure to the trailer. Simple, fast and neat.

After install I had several of my larger sized buddies jump, stand and wiggle on it to test it out, and it didn’t flex at all. They too were impressed with the design and strength of the step.

They have two different models, a side step and tongue step. I chose the side step as it fixed a problem I was having but many longer tongues on trailers may be better with the tongue step.

I have added non-skid to the top of the step, just in case it gets wet and have used it several times since the install and am pleased with how easy it has made loading and unloading the boat. Even after several trips over pothole filled roads, it has remained secure and stable.

The EZ Troll Step retails for $98.95 and can be found at TackleWarehouse.com.