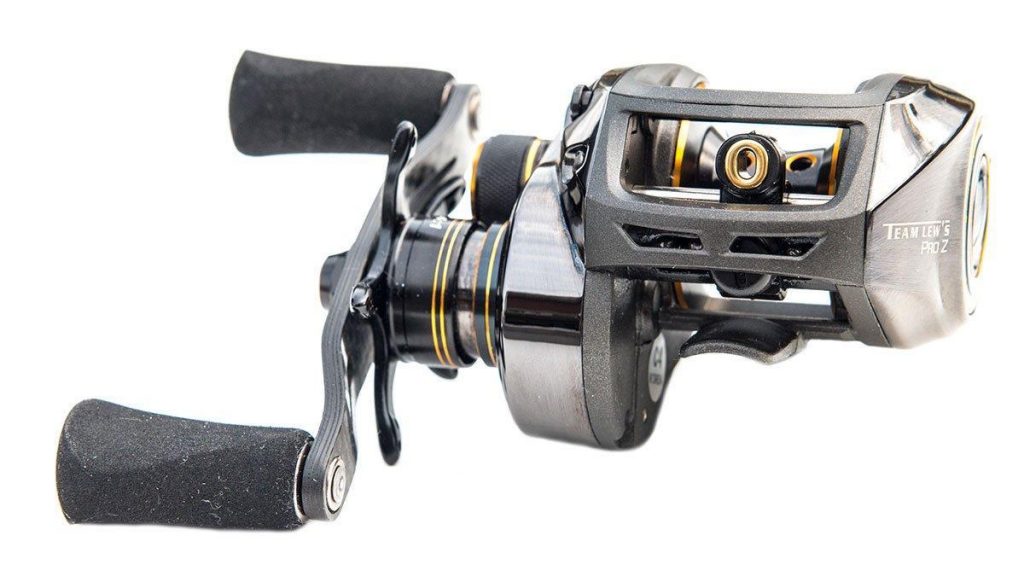 I’m fairly familiar with Lew’s reels. I fish with them regularly and I’ve always been impressed by their performance and value. They’ve become quite popular among anglers of all skill levels lately and I can’t help but think that those same factors play a big role in purchasing decisions across the country.

Until recently, I’ve never had an opportunity to test out their high-end models. I’ve heard friends in the fishing community rave about them, which admittedly got me a little giddy about getting my hands on one. So I finally got the Lew’s Team Pro Speed Spool Casting Reel. After some long days on the water using nothing but this reel, I understand the all the fuss I’ve been hearing.

If you’re in the market for a high-end casting reel, I think there are a few things you should know about this particular model.

You’ll have to work to get a backlash

I knowâ€”that’s a bold statement. I was hesitant about even typing those words, but unless you try to cast the Lew’s Team Pro like a push-button reel, it’s tough to make this thing backlash. I’m sure you could make it happen, but under normal circumstances it’s not an easy task. It manages line beautifully and adjusts to specific conditions better than many reels I’ve used in the $299 price range.

I’ve been using the 7.1:1 gear ratio model spooled with 17-pound fluorocarbon while fishing Texas rigs and smaller jigs. Once you get past that 15-pound threshold, it seems as if line management issues tend to occur more regularly. So that’s why I made a point to test this reel with heavier fluorocarbon line. I wanted to see what it could handle.

Casting reels are fickle little creations. You’ll get ’em totally dialed in for skipping a certain-sized weight under docks and if you choose to make a small weight adjustment throughout the course of the day, you’re back to turning knobs and mumbling choice words under your breath. This happens to all of usâ€”probably more often than I’d like to admitâ€”so that’s a big reason I’ve been flipping and skipping so much with this particular reel. 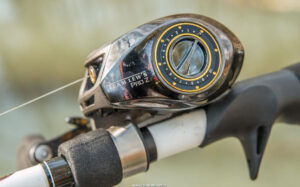 After my testing, I’m incredibly impressed by both the adjustability and line management of the Lew’s Team Pro. I literally took it out of the box, filled it with line and went to the lake. I pulled up in the first short pocket I came to, flipped a few laydowns and went straight to a stretch of docks without touching the brakes or tension knob. I skipped a lizard into the darkest part of the first dock without the first sign of loops, knots or backlash. I fished the rest of the day with the totally “stock” settings without any line issues whatsoever. All I’ve done to the reel is tighten the drag.

The following few trips, I saw a few opportunities for improvement. The tension was a little loose for my liking, so I made a point to mess around with the brakes and tension knob. The reel is very responsive to small adjustments, which is a huge “plus” in my opinion. The tension knob clicks with every adjustment, making it easy to keep track of your changes, and the magnetic brake dial located on the sideplate were simple to use and made it quick and easy to make a few adjustments as I was pitching to isolated pieces of shallow cover. 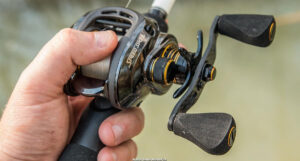 I’ve written about this a few times, but I think it’s worth mentioning againâ€”I’ve never been too caught up in a reel’s weight. It’s just a number to me. If it feels comfortable and sturdy in my hands, I’m going to use it. If it’s a few ounces heavier or lighter than another model, it doesn’t affect my purchasing decision. I don’t think a few fractions of an ounce is going to make a huge difference in catching more fish. Not for me, at least.

With that being said, the Lew’s Team Pro weighs 6.1 ounces. So if you’re primarily concerned with weightlessness, there’s your figure. But again, I wanted to delve a little bit deeper into it.

It’s comfortable in my hands, regardless of my rod or bait selection. I have big hands and it was quite ergonomic and easy to fish with for an entire day. I didn’t experience any hand cramping or slipping while it was under a load. And for the folks that like to focus on weightlessness? Yes sir, it was indeed lightweight. Comparable to many of the reels I’ve tried in more expense price brackets.

I was most impressed, however, by how sturdy it felt. I’ve caught dozens of fish on this reel and I have not heard a single crack, snap or pop while retrieving line, setting the hook or horsing a bass out of a laydown. There’s no wiggle room in this reel. It’s tight, which subconciously gives me a bit more confidence when I’m setting the hook. I’ve used lots of expensive reels that went a bit too far with the whole “lightweight” conceptâ€”sure, they felt like a feather but you could almost feel them flex at times. That has not been the case with this reel. It has some serious shoulders.

You’ll be in control 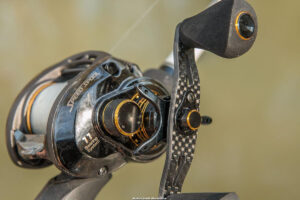 It doesn’t matter what technique I’m usingâ€”I cinch the drag down as tight as it will go on all of my reels. Everybody has their little nit-picky quirks and that’s certainly one of mine. When I set the hook, I don’t want to give up a single centimeter of line.

So as you can guess, I’ve been using the Lew’s Team Pro with the drag totally tightened. As a result, I’m not able to speak of the drag’s smoothness. But I can, however, talk about its strength.

The fish on my home lakes lately have been buried into some ridiculously thick cover. It’s fun, but you have to work for every bite and getting the bite has been less than half of the battle. Getting ’em out is the fun part. This reel’s drag has held strong whether I’m pulling a 4-pounder over dock braces or yanking one from inside grass lines. No slipping to speak of. 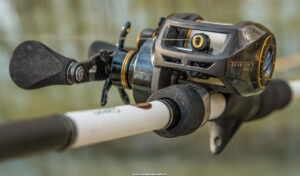 This is a hard thing to write about, if I’m honest. Not to mention, it’s a terribly overused clichÃ© when you’re reading about fishing reels. It’s hard to read a product review without hearing about smooth reels. But I have to do itâ€”I hope you’ll forgive me.

This reel isâ€”you guessed itâ€”ridiculously “smooth”. I’ve tried looking through a thesaurus to find a better word, but I can’t. And that’s really all I can say about it. You know how awesome it feels when you first peel the protective film off a new electronics screen? That’s how I felt when I took the Lew’s Team Pro out of the box and turned its handle. It was oddly pleasurable.

On a serious note, however, this reel will impress you while you’re on the water. We have a bunch of pollen and filth on the water right now and although it has a tendency to gunk-up your reels, this particular one is still performing like the day I got it. 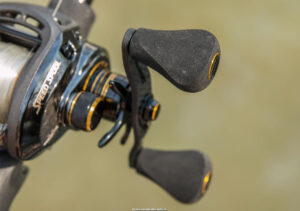 It takes a lot to impress me these days. I see a lot of fishing tackle and gearâ€”some of it I like and some of it I don’t. This reel has really impressed me. It has a permanent spot on my front deck and I’ll be getting a few more.