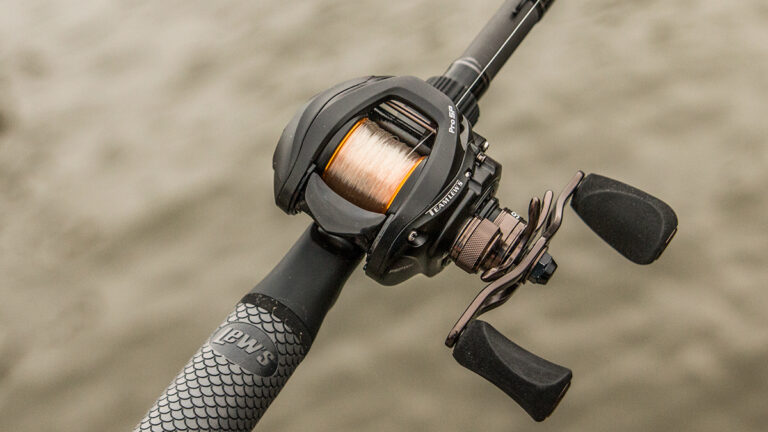 I like to bass fish in shallow water for the large majority of the year; if I had to guess, I’d probably say that about 9 months per year I’m fishing in less than 8 feet of water. Everybody has their preferences and their “thing” and shallow fishing just happens to be mine. With that being said, I’m most often making flips and pitches in shallow, heavy cover and you could play a game of pool with the large majority of the rods on my front deck. But that also means that I normally have to pay a bit more attention to my reel selection. I can’t use wimpy stuff and to be honest, some of those super-expensive reels don’t cut it for me either. They’re almost too lightweight and the reel frame will flex when I’m yanking a big bass out of thick cover. I need something with some shoulders to it.

I’ve been really excited about publishing this particular review because I think a lot of y’all are going to like it. If you like that close quarters-type fishing in skinny water, I’d strongly suggest at least putting one of these reels in your hand and getting a feel for it. It offers some really nice features that make it a very specialized reel for folks like me. 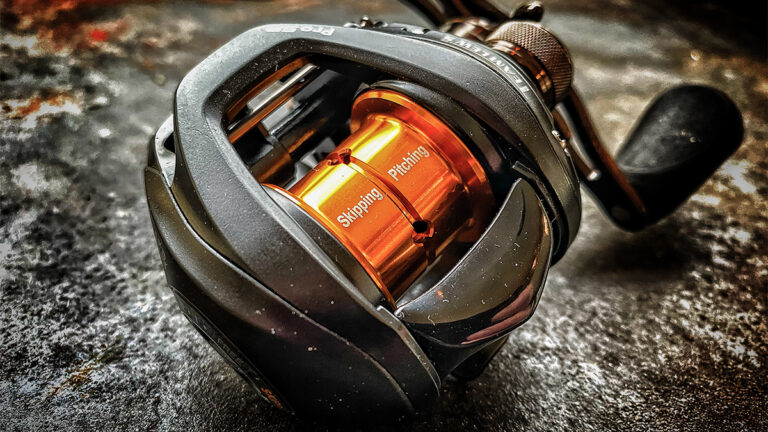 The Lew’s Team Pro SP Speed Spool Casting Reel comes with a 32-millimeter shallow spool that, in my opinion, is an outstanding idea for folks who like to fish heavy cover in shallow water. One of the best skinny-water guys in my state told me several years ago, “Heck, if they get deeper than 10 feet, I probably don’t even have enough string to catch ’em.”

Although I’m sure it was an exaggeration, testing this shallow-spooled reel made me think of his thought process. Fishing line is getting pretty dang expensive and instead of having to waste line for backing material and mess with leader knots on your flipping and pitching setups, this shallow spool kind of eliminates all of that. You can tie your main line straight to the spool and start fishing. It takes me about 30 seconds to spool one of these reels with 20-pound fluorocarbon. If you’re fishing in less than probably 10 feet of water, you’ll have plenty of line.

Keeping that in mind, you’re not really going to be able to fish deep brush and make bomb frog casts with this reel; it’s a very specialized reel made specifically for flipping and pitching. So if you’re a shallow guy and would like to have a few very technique-specific combos on your front deck, I would absolutely recommend this reel. It’s a fair price and it will allow you to save plenty of money on line over time.

You’ll be skipping with ease in no time 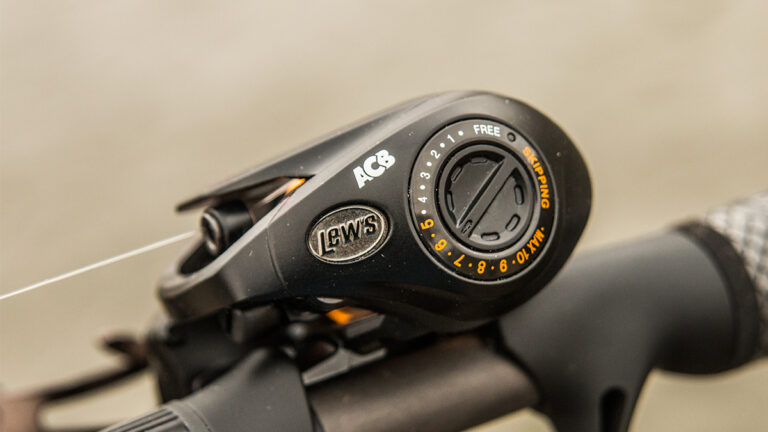 I’d be willing to bet that the most frequent question I receive is regarding learning how to effectively skip jigs and soft plastics with baitcasters. I’ve always had a tough time answering that question because to be honest, I just spent months and years messing up in order to get good at it. But man, the technology some of these companies are coming out with are making the learning curve much, much shorter than it was when I was coming up.

The Lew’s Team Pro SP Speed Spool Casting Reel has a 27-position braking system and if you’ll notice in the photo above, you’ll also see a skipping-specific orange-colored zone on the side plate. I’m not sure if very experienced anglers will need this as much but for those who are a bit newer to baitcasters and skipping underneath overhanging cover, I think this is going to be an enormous help. Normally, baitcasters take a good while to tune for skipping when you take ’em out of the box but I’d be willing to bet that a beginner could learn to skip a boat dock with this reel in under 10 minutes.

High-speed gear ratios are a necessity 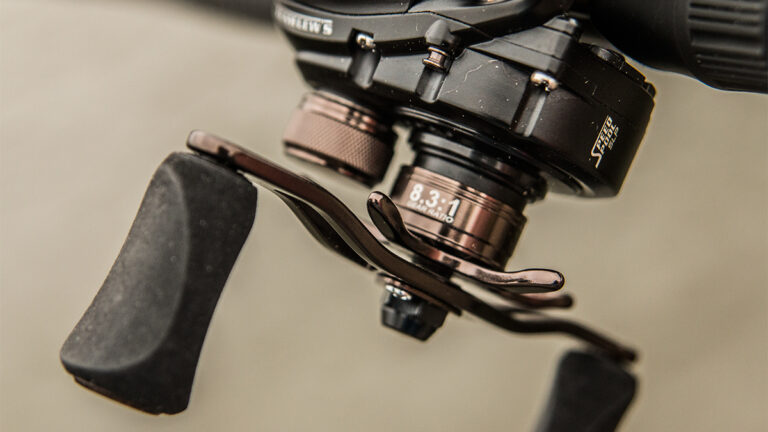 When you’re fishing in what I call close-combat situations, there is no room for error. You don’t need to be pitching and flipping with a 6.3:1 ratio cranking reel. When a bass bites in the thick stuff, your reel needs to eat up every inch of line as quickly as possible because if you let ’em, those big bass will wrap you around something gnarly in a New York minute.

Along with the shallow spool design, you can tell Lew’s isn’t messing around with this reel and they unapologetically designed it with something very specific in mind. Whether you’re left- or right-handed, you be able to get it in a 8.3:1 ratio which, throughout my testing, has been a huge help. No matter which position my rod is in when I get a bite, I can eat up any slack line and snatch that bass out of the cover and into my boat without any issues.

The drag system doesn’t mess around, either 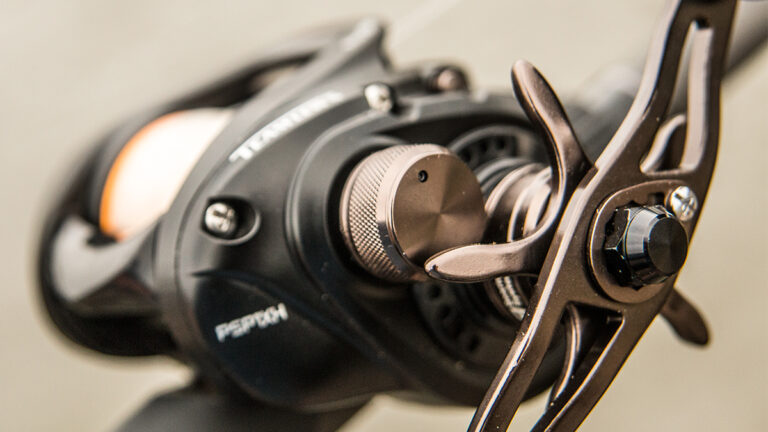 When I set the hook while I’m flipping and pitching, I don’t want a single millimeter of line to leave my reel. I’m sure some anglers, many who are more talented than me, might disagree but that’s just how I’ve always preferred it to be. I just prefer to have total control of things when the chaos ensues.

Fortunately, this reel gives me that ability. It features a 20-pound carbon drag system that has been plenty strong enough to horse fish out of both grass and wood without getting wrapped up. I definitely give this drag system a thumbs up. 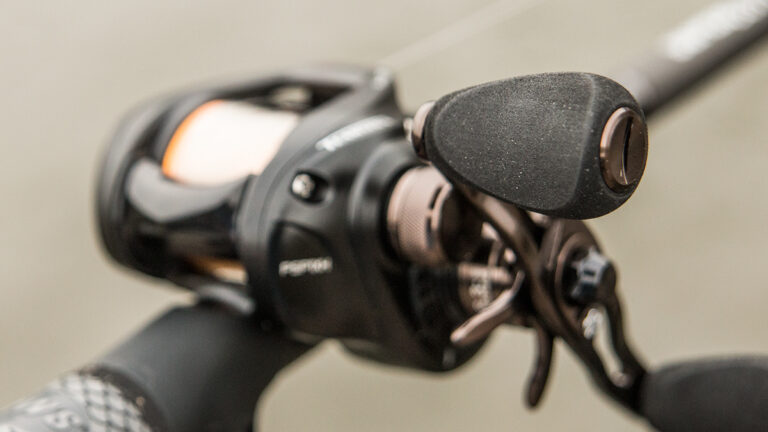 If you like to fish in shallow water, I think you owe it to yourself to give this reel plenty of consideration. You’ll be surprised how easy it makes skipping and when the bite happens and things get wild, this reel has plenty of shoulders and guts to take control of the situation. I think Lew’s did an outstanding job with this reel.