When I first laid eyes on this reel at ICAST 2016, I had a strong feeling that Lew’s had created something quite special. I guess I wasn’t alone; it won the Best Freshwater Reel category for the entire show. Although it looked great and felt solid in my hands, it was important that I put it through the rigors of everyday use. Anything can look good in a showroom, but whether or not it performs to expectations on the water is an entirely different story.

I’ve been testing the Lew’s Custom Pro Speed Spool SLP reel since its introduction and I haven’t been easy on it. I’ve used it to wrench big bass from both big lakes and small farm ponds, I’ve purposely left it out in the elements and I’ve tested it with a myriad of different lures—both lightweight and heavy.

This is one of the more impressive reels I’ve tested for several reasons.

Lightweight and low profile, but not wimpy 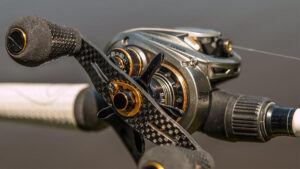 To achieve the weightlessness expected by consumers, some reel manufacturers sacrifice stability and durability. I’ve tested a lot of reels over the years that are incredibly lightweight, but flex and torque when under strain while fighting big fish. When this continues over time, parts and components can and will break. It’s happened to me several times.

The Lew’s Custom Pro Speed Spool SLP weighs in at just 5.8 ounces and is designed with a one-piece aluminum frame bookended by C45 Carbon side plates. It’s one of the lightest reels I’ve ever had in my hands and even when I intentionally try, I can’t get it to flex.

In my opinion, a lot of lightweight reels feel cheaply made. The components of this particular reel, however, are rock-solid. Everything from 95mm Carbon fiber handle to the double-anodized aluminum drag star combine to make this reel feel like one cohesive unit.

As earlier stated, I’ve purposely left this reel in the rain for several nights in a row. I never dried it off, cleaned it or oiled it and it continues to work like it did when I first took it out of the box. I’ve banged it around in my rod locker in rough waters and tossed it around in a john boat while pond fishing and it’s holding up remarkably well.

The frame and side plates resist boat rash well and the internal components are still operating flawlessly.

The new grips are a huge plus 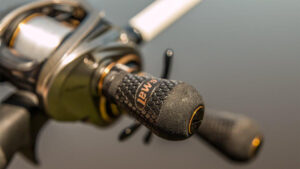 Perhaps my favorite features of the Lew’s Custom Pro Speed Spool SLP are the Winn Dri-Tec handle knobs. They’ve proven to be a big-time solution to a common probem I’ve battled for years.

Your hands get really wet throughout a day of fishing. Whether you’re pitching and flipping a big jig or unhooking and culling fish during a tournament, your grip is often compromised at some point in the day. I’ve had a heck of a time with my right hand slipping off of the handle during my hookset; especially with an aggressive, close-quarters hookset. This leads to a lot of bloody knuckles for me, as they usually slam against the drag star.

Nothing has helped alleviate this problem as well as these Winn Dri-Tec knobs. They repel both water and fish slime extremely well and I’m able to keep a firm grip on the reel handle at all times, especially during the hookset. I’ve always been a big fan of large grips, but the addition of this material is a major selling point for me.

They’re not in some gawdy, tacky-looking color either. They look good and accent the reel’s color scheme excellently. 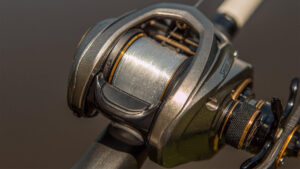 Whether you’re fishing a flat-sided balsa plug or pitching a 1/2-ounce jig around heavy cover, you’ll be impressed by the superior castability and line management of the Lew’s Custom Pro Speed Spool SLP. It’s a beautiful thing, to be quite honest.

The ACB SpeedCast centrifugal braking system has 27 different settings, made known by audible clicks when an adjustment is made. It’s not at all difficult to get this reel set up out of the box; it took me about 4 or 5 casts to get it dialed in with a lightweight balsa crankbait.

It’s adjustability has made it a pleasure to use in windy conditions. You won’t find yourself constantly picking out backlashes during the day, just a few counter-clockwise clicks of the external brakes will make casting into the wind quite effortless. 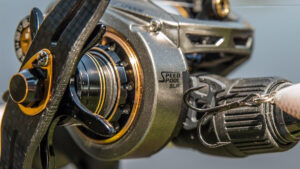 Lew’s has integrated three very small, yet important features into this reel that potential buyers should be made aware of.

The Speed Keeper hook keeper is one of those “Why didn’t I think of that?” additions that, when you get used to it, makes a big difference. Instead of hooking your lures to the face of the reel, you can deploy the Speed Keeper and keep the reel free of scratches. For anglers who like to sell their reels each year to make room for the new models, this will be a big help for the reel’s resale value. When the Speed Keeper is stowed while fishing, you’ll never know it’s there. 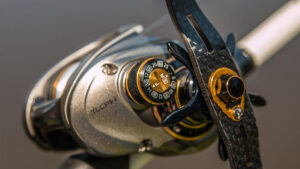 The Speed Dial line indicator is really slick and provides a practical solution to common line management issues. With just a few clicks, you can move the indicator—located on the face of the tension knob—to display your line diameter and line type. This is a big help if you have several similar-looking combos and can’t remember whether or the reel is spooled with 15 or 17-pound fluorocarbon.

And finally, you’ll notice that the Lew’s Custom Pro Speed Spool SLP has an easily accessible external lube port. If you need to add some extra lubrication, simply remove the plate and inject the oil. There’s no need to take anything apart.

This is a killer reel; I will own many more of them. Priced at $259.99, I was actually surprised it wasn’t more expensive. I expected it to be in the $300 range and to be honest. If you’re in the market for a high-end casting reel, get this one in your hands before you make a decision. 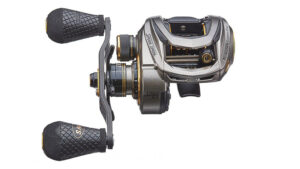