I grew up flipping a black and blue tube on the Arkansas River. There weren’t many good hook choices at the time. They weren’t the best because this was before the days of Super Line hooks or good flipping hooks. A straight shank worm hook would work but it was a bear. Tubes were pretty thin too. Eventually flipping a tube lost favor for me.

This spring, I got back to flipping a tube this Spring thanks in large part to the Lazer Trokar Tournament Tube hook. This hook works perfectly for the modern flipping tubes on the market. I have been using a Lunker City Lunker Tube a lot this spring. It’s a thick-walled tube. So that makes penetrating the plastic difficult for most hooks. That means you’re in a Tex-posed situation, where you lay the hook point on the back of the tube, and the just prick the point into the plastic. So as the fish clamps down the point exposes and hooks the fish.

What you have to worry about with a lot of hooks when you Tex-pose the hook is the hook possibly flexing on the hookset and not driving the point into the fish. The Lazer Trokar Tournament Tube Hook is very strong. It has a hair of flex to keep from breaking, but it’s been a solid hooking tool for sure.

The Tournament Tube hook really blends an EWG or Kahle bend with a flipping hook. The B.A.R.B. system holds the tube extremely well. In fact, the tubes on this hook held up through dozens of fish. In fact in one very active day of flipping, I didn’t even use half a bag of Lunker City Lunker Tubes because they didn’t tear up on this hook, stayed on the barb and had perfect penetration every time. 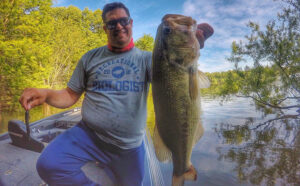 I used both the 4/0 and 5/0 sizes with good success with 4-inch tubes. The hook did not get hung up in the cover hardly at all. I was pleasantly surprised by that. When I flip and pitch, I generally like my hook point to be buried in the plastic because as baits wear down from catching fish, they often have trouble holding the hook point and keeping it covered.

But the tex-posed tip of the Tournament Tube Hook stayed covered and flipped well all day long. Probably the most surprising aspect is where and how a lot of the fish were hooked. I had some fish hooked in the hardest part of the mouth. Like pushing as hard as I could with pliers, I could barely get the hook out. The cutting edges on the Trokar point give an amazing penetration even in thick cover.

What a lot of people don’t realize with flipping heavy cover like flooded bushes, willows, leafy laydowns and other thick cover, when a fish bites and runs you through a bunch of branches, you lose a lot of your power on the hookset because the branches absorb so much of the hookset. So having the Lazer Trokar Tournament Tube hook with a cutting edge in that thick cover was a huge advantage.

I’ve really found this to be my favorite tube hook as of late because of my experiences this spring fishing it in flooded cover. I will try it more this summer in deeper casting applications and probably update this article with those findings as I fish it more. But I will definitely keep these hooks on hand for my tube flipping in the future.

You can find the Lazer Trokar Tournament Tube Hook at TackleWarehouse.com and retailers that carry Lazer Trokar hooks.