I don’t think I’ve gone a single week of my adult life without pitching and flipping some sort of shallow cover. Because I do it so much, I’ve had an opportunity to experiment with just about every mass-produced soft plastic in existence. It’s a funny thing, actually—the more baits I test, the smaller my “starting lineup” becomes.

I’ve been fishing with the Z-Man Palmetto BugZ for about two months, ever since some friends of mine starting hyping it up. After a lot of tinkering, it has become one of the more impressive pitching and flipping baits I’ve run across lately.

Here’s a rundown of what you need to know.

The Z-Man Palmetto BugZ has a thick, ribbed body and four streamlined appendages. The key word being “streamlined”.

When I pitch my bait into a thick laydown or matted vegetation, I want it to fall to the bottom on the first attempt every single time. These shallow-water bass are spooky and if I’m trying to get a crazy-looking appendage untangled from a branch or stem by constantly shaking my rod tip, there’s a good chance I’ll alert nearby fish to my presence.

The Palmetto BugZ falls straight to the bottom on each presentation, which increases your stealth significantly. In addition, you can make multiple pitches to the same target quickly, which helps with efficiency as well. 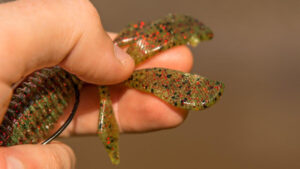 This bait is made with Elaztech plastic, which gives it outstanding buoyancy. Of course, you’re probably not going to be swimming the Palmetto BugZ on the surface, but this buoyancy makes a noticeable difference underwater.

When you Texas rig it, whether it’s with a 1/8-ounce or 1/2-ounce tungsten, the Palmetto BugZ floats above your sinker on the bottom. I’ve tinkered with it a lot in shallow, clear water and it’s an excellent representation of a threatened crawfish. The claws rise and float, which brings a lot of attention to your offering.

I’ve actually caught a fair number of fish with the Palmetto BugZ when fishing behind other anglers. The boat docks on my local fisheries get hammered with pressure and the bass get tough to catch. I’ve personally seen several clear-water bass swim two and three feet just to eat this bait. That’s no exaggeration.

It doesn’t fall on its side or lay flat on its back when sitting on the bottom—I think that’s something bass aren’t used to seeing with many traditional pitching and flipping baits, which is why it has been working so well for me.

The colors are very vivid

Before I ever tried these, I scoped ‘em out on Tackle Warehouse for a few days. The colors looked good and they seemed to have just about every mainstream pitching and flipping color.

When I finally got my hands on them, I was fairly taken aback by how vibrant the colors were; there’s a lot of flake in these baits. It probably doesn’t make a big difference in cloudy conditions, but it has been a pretty significant advantage on sunny days.

We’re in a drought right now, so the water has been uncharacteristically clear. As a result, I’ve primarily been using the Watermelon Red color and it has a ton of flash to it as it falls to the bottom.

Something interesting has been happening, too: I’ve been getting about half of my bites before it even hits the bottom. I can’t help but think the added flash is drawing some extra reaction strikes from these bass. It’s not a miracle bait (there is no such thing) but there have been times when the Palmetto BugZ has out-fished similar baits in my boat. 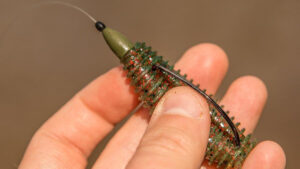 I’ve caught over 25 bass with one Palmetto BugZ. This Elaztech material is unbelievably durable. It stays on the hook without sliding down the shank and it holds up remarkably well to repeated fish catches. That’s a darn good value, in my opinion.

The price is very reasonable, too. You can buy ‘em at $3.99 per 5-pack and one pack will last you several weeks of fishing. No kidding.

This is a solid bait that should really appeal to the shallow-water power fisherman. It has won several tournaments around here lately and once I finally tried it, I’m starting to see why.

The Z-Man Palmetto BugZ is available at TackleWarehouse.com.