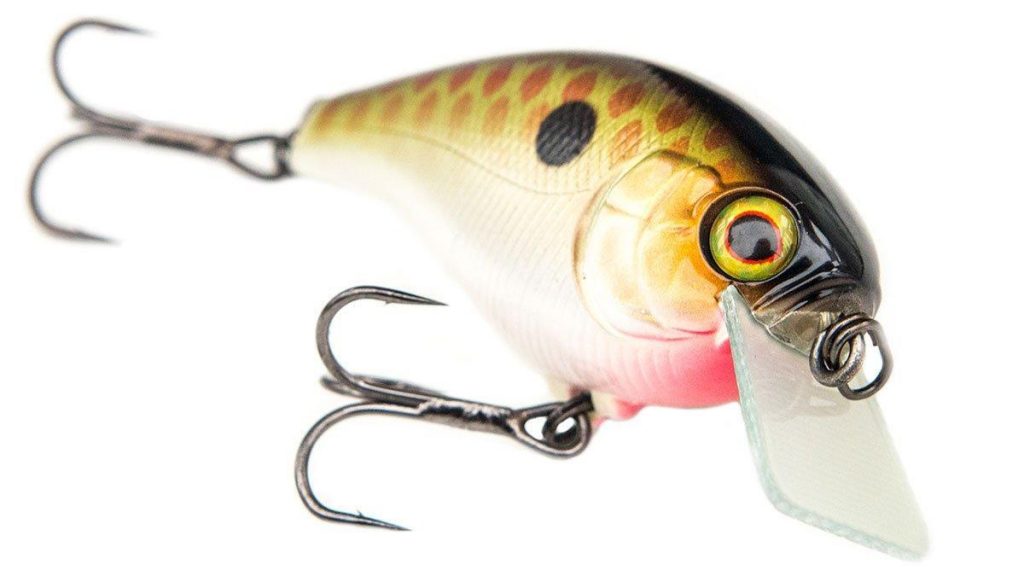 I put a lot of effort into testing all different types of crankbaits throughout the year. Everybody has their thingâ€”some like rods and reels, others get all jacked up about swimbaits. Iâ€™m a bit different. I absolutely love a good crankbait. Thereâ€™s nothing better than feeling your rod slowly load and feeling a few slow, heavy head shakes on the end of your line.

The crankbait bite is just now starting to develop in my area, which has given me an opportunity to spend a considerable amount of time with the Jackall Aska SR. Iâ€™ve been using the 50 series due to the coolder water temperatures and have become a really big fan of it. Itâ€™s a small crankbait, measuring only 2 inches and weighing just 1/4-ounce, which makes it an excellent choice when targeting especially finicky bass.

After my testing, I believe this crankbait has several noteworthy characteristics.

Crashes through cover with minimal hang-ups

A lot of folks seem to believe that, just because a crankbait has a square-shaped bill, they can burn it through everything imaginable with absolutely zero hang-ups. Thatâ€™s simply not the case. Every squarebill is going to get snagged periodically, but if you take advantage of the buoyancy of the Jackall Aska SR and retrieve it accordingly, youâ€™ll be quite impressed by its ability to come through cover.

Like I mentioned earlier, this is a small crankbait. And to be honest, small plugs arenâ€™t always my favorite when Iâ€™m targeting really thick cover such as laydowns and ripraps. A lot of them lack the buoyancy of larger crankbaits, inhibiting them from effectively floating about any obstructions. In addition, small crankbaits are often adorned with fairly diminutive bills which can cause issues for heavy cover fishermen.

After seeing the Aska SRâ€™s size, itâ€™s safe to say that I had mediocre expectations for its deflection properties. But I was really surprised, to be honest. Itâ€™s very buoyant for its size, so when I slam into a log, stump or piece of chunk rock, Iâ€™m able to quickly pause my retrieve to allow the lure to clear any snag-inducing cover. I was especially impressed by how efficiently Iâ€™m able to fish it on long stretches of riprapâ€”its fiberglass bill deflects very well off of jagged rocks.

When it comes to fishing wood cover, itâ€™s much better than many squarebills I own. Is it the best? That might be a stretch, but itâ€™s very impressive when you â€œwormâ€ it through gnarly laydowns. By â€œwormingâ€ it, Iâ€™m essentially referring to moving the lure with only your rod tip, while using your reel to retrieve slack line. Iâ€™ve had a lot of fun using this technique with the Aska SR around shallow brushpiles in front of homeownersâ€™ docks.

Youâ€™ll notice that the front of this crankbait feels much heavier than the rest of the lureâ€”thatâ€™s the internal balancing weight. Itâ€™s a stationary weight that does, in fact, allow the crankbait to continue on its original path shortly after making contact with cover. Iâ€™ve used a lot of crankbaits in the past that require a few handle turns in order to get â€˜em back on course, but Iâ€™ve really enjoyed how the Aska SR plows through cover without kicking out too far and helicoptering or spinning out. 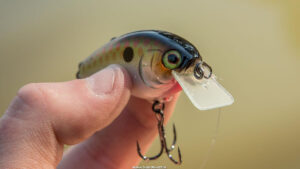 Iâ€™m always a bit skeptical when I hear anglers say, â€œI couldnâ€™t buy a bite on a crankbait today.â€ And thereâ€™s a reason I say that.

If you look in most folksâ€™ tackle boxes, theyâ€™re using pretty big crankbaits. Theyâ€™ll have big, rounded bodies, huge lips and an aggressive wobbling action. Conditions have to line up pretty well for those crankbaits to come into play. Thatâ€™s why I use finesse crankbaits throughout the majority of the year. Theyâ€™ll simply get bites when others cannot.

The Jackall Aska SR is an incredibly effective crankbait when conditions arenâ€™t exactly ideal for crankbait fishing. Iâ€™ve used it to catch bass on calm, bluebird days when most folks would be flipping and pitching heavy cover. Its small stature and fiberglass bill give it a really unique â€œhybridâ€ action of sortsâ€”you could honestly classify it as both a wobble and a shimmy. It does wobble from side-to-side throughout the retrieve, but when compared to most larger crankbaits, itâ€™s a very non-imposing action that seems to fool lethargic bass in fairly cool water temperatures.

Iâ€™ve experimented with this by going down a stretch of riprap thatâ€™s historically loaded with bass. First, I fished the entire stretch with a â€œregularâ€ squarebill and I caught one fish. The water is still a bit too cold for such an aggressive action. Then I went back down the same stretch and caught 4 bassâ€”and they all had it choked. 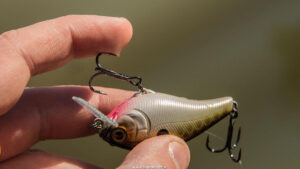 I harp on this subject all of the time, so if youâ€™ve read these words before, I apologizeâ€”I prefer crankbaits that donâ€™t require a bunch of modifications before I use â€˜em. I consider my fishing time precious, so Iâ€™d rather be casting on the front deck instead of changing hooks and tuning a lure. Simple enough, right?

The Aska SR comes with Owner treble hooks that are very sharp. They donâ€™t have much flex to them, which comes in handy when you have a bass bulldogging you at the side of the boat. Iâ€™ve been able to enjoy a great landing ratio when using this crankbait straight from the package.

I only own two of these crankbaits, but I have not needed to tune one yet. Theyâ€™ve both run excellently without any modifications. 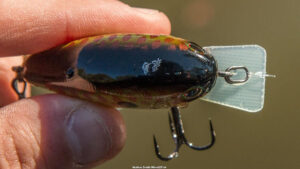 Iâ€™m also a big fan of the oval-shaped line tie. I donâ€™t think it adds any action or anything of the sort, but it does make knot tying quicker and much easier. Instead of worrying about the line getting caught in the gap of a round line tie, Iâ€™m able to tie a quick Palomar knot and get on with the day. 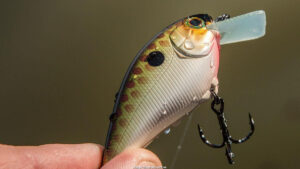 The Aska SR has a unique, molded belly hook keeper thatâ€™s quite different from the traditional hook keepers youâ€™ll find on most squarebills. Itâ€™s said to reduce hang-ups when coming through heavy cover, but because I havenâ€™t seen this lure work through cover on an underwater camera yet, I canâ€™t confirm or deny that.

What I can confirm, however, is that this belly hook keeper does allow you to use larger treble hooks if need be. It gives the front hook a smaller range of motion than the more common designs, so you can upsize both hooks a bit without them becoming tangled throughout the retrieve. I thought this was a pretty cool idea because the common knock on small crankbaits is their small treble hooks. This little feature opens up the possibility of using suitable-sized hooks while maintaining a small, finesse profile. 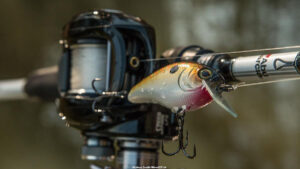 I think this is a slick little crankbait and I plan on using it pretty heavily throughout the prespawn period and during post-frontal conditions in the summer. I can also see it performing quite well throughout the fall months, too. Itâ€™s priced at $15.99 and yes, I agreeâ€”thatâ€™s a bit steep. But itâ€™s hard to get too torn up about the price point when itâ€™s such a productive lure. Some folks will jump all over a $15 crankbait while others will stick to more affordable options, and I totally understand and respect that. Itâ€™s just a matter of what youâ€™re most comfortable with.

If youâ€™re a cranker like me, I consider this crankbait a solid addition to your arsenal. Itâ€™s available at TackleWarehouse.com and other Jackall dealers.