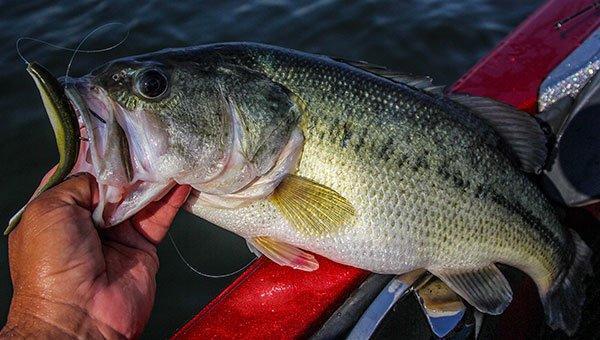 Soft jerkbaits are an outstanding way to catch fish in every body of water—whether you’re a pond angler or a big lake angler, tossing a soft jerkbait is a great way to locate fish. I’ve been fishing with the Gary Yamamoto D Shad and it’s not just another soft jerkbait. It has 3 unique qualities that can catch heavily pressured bass.

Increased density keeps it in the strike zone

This past week, I was talking to a friend of mine who primarily fishes ponds. Although he loves using soft jerkbaits, he has been finding it difficult to keep them underneath the surface. The Yamamoto D Shad was actually developed to solve this very problem.

While using the Yamamoto D Shad in a variety of situations, I’ve noticed that it’s much denser than other soft jerkbaits. The increase in density has allowed me to work the D Shad very quickly and erratically while keeping it in the strike zone. It doesn’t skip across the top of the water—instead, it stays about 1 foot below the surface. I’ve been rigging the D Shad on a 3/0 Offset EWG Worm Hook and working it as fast as I can with no “porpoise jumps” out of the water.

Yamamoto strayed away from the traditional forked tail design of many soft jerkbaits. Instead, the D Shad was created with a solid, almost diamond-shaped tail. The heavier tail allows the bait to fall very evenly throughout the water column, which has helped me catch a lot of fish. If I have a bass short-strike the D Shad, I immediately “kill” it and let it sink on slack line. The level fall looks just like a dead shad, prompting a lot of follow-up strikes on the same cast.

The unique tail design also gives the D Shad an awesome shimmying action while it falls on slack line. Much like the Yamamoto Senko, this bait subtly vibrates on the fall, displacing a lot of water. That being said, it’s important to watch your line with the D Shad because the majority of your bites will occur on the fall, in between twitches.

The D Shad has allowed me to cover a lot of water in a short amount of time. Because it’s a bit heavier than other soft jerkbaits, you’re not limited to spinning gear when using it. Rigged with 15-pound fluorocarbon and a medium-heavy rod, you can make some bomb casts with this little soft jerkbait. Whether you’re casting to schooling fish or skipping it under docks and overhangs, you’ll be able to use the D Shad on heavier gear.

Because this bait works well on casting gear, I’ve been able to target very thick cover without losing fish. Ditching the spinning gear has opened up a lot of opportunities with the D Shad. I’ve horsed fish from underneath docks and blowdowns without having to worry about hang-ups or breakoffs.

If you’ve shied away from soft jerkbaits in the past, give the Yamamoto D Shad a try. It stays in the strike zone, has a great falling action and allows for some crazy casts.

The Gary Yamamoto D Shad is available at TackleWarehouse.com. 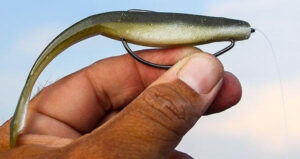