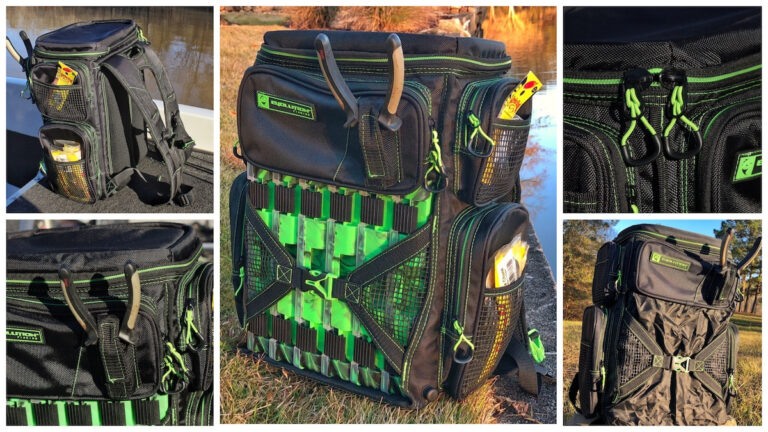 When it comes to fishing tackle, I’m an OCD pack rat. Those two may seem contradictory at first but that’s probably the best way to describe me. I love fishing tackle and have a lot of it but it seems untamable at times. I’m constantly looking for new ways to make sense of the mayhem and pack as much tackle into a compact space as I possibly can. Thus, I am very excited about the product we’ll be reviewing today.

The Evolution Outdoor Drift Series Tackle Backpack was made for a guy like me and most anglers without a big boat for that matter. It has room for everything you might need for a day on the water or even a week-long trip. Whether you’re fishing from a kayak, jon boat, as a co-angler in a buddy’s big boat or just walking the bank, this is one you’re going to want to give a look. 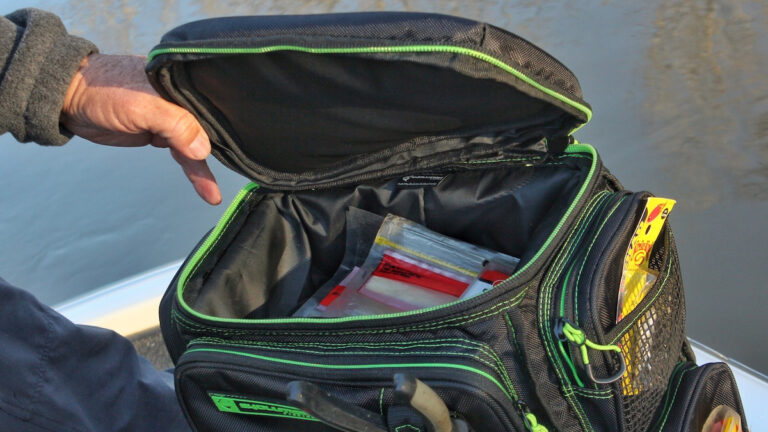 One of my favorite features of this bag may be be the simplest. Not to discredit the other really cool things they did with this product but the big top compartment operates similar to the “day boxes” I’ve had before in some big fiberglass boats. I’ve found myself at times fishing from a $60,000 fiberglass boat with most of the gear I planned to use for the day stowed in a small cardboard box inside one of the big compartments. Then the boat manufacturers realized this and started to incorporate a day box into their designs, so the angler had one small, but handy, compartment in the boat where they could consolidate the main things they thought they might need for that day on the water.

The top hatch of the Evolution Outdoor Drift Series Tackle Bag functions the same way for me and I love it. With the backpack sitting upright, the top hatch is at a good level to reach into and pick out the more common things you’re using for the day, whether you’re standing on the shoreline, sitting on the deck of a big boat or turning around in a kayak to grab something. It’s a good catch-all place to put the most essential items. But that’s just the tip of the proverbial iceberg when it comes to storage in this thing.

There are five additional zippered compartments as well as four rubber coated mesh pockets. These work extremely well for packs of soft plastics, hard baits still in their original packaging, wacky rig tools, dye, cull tags and more. Each is accompanied with a heavy-duty zipper paired with an oversized pull tab for easy operation, even if you’re in an awkward position, like reaching behind yourself in a kayak. There are also six matching tackle trays that come with the backpack. These are held in to the bag by a combination of straps, netting and a buckle.

This is a pretty innovative idea and not something I’ve seen done by anyone before personally. Though the overall bag has a soft feel to it, you can tell the walls around these boxes have a thin sheet of harder material reinforcing them. This, along with the tackle trays themselves, gives the bag enough rigidity to stand upright firmly if you want to set it on the ground, on the floor of the boat or in the back well of a kayak. But when taking a tray out, I prefer to lay the bag on its back and slide the tray up and out.

There’s also a little rain cover stored under the top front zippered compartment that can be pulled down over the trays to offer a little protection whenever there’s a rain or spray from the water present. There’s an elastic band in the trim of the cover that can be pulled over two small black tabs at the bottom of the bag to secure the cover in place. Another really smart addition.

Who is this bag good for? 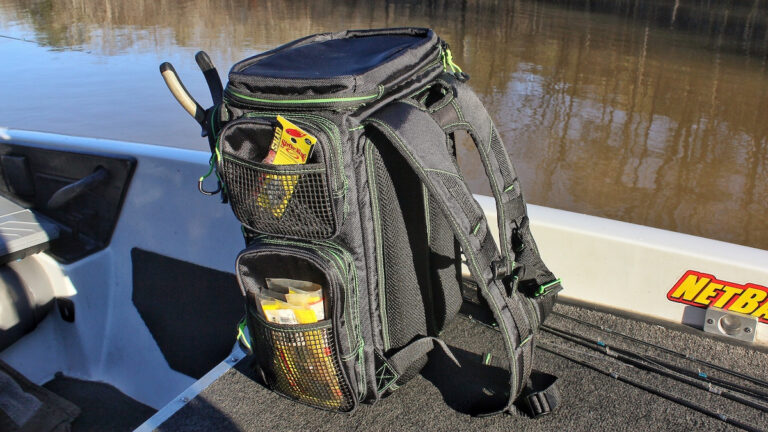 Like I stated at the onset, as long as you don’t have a big bass boat with lots of storage, this would be a pretty sweet bag for any other angler. For the kayak guy, I really like this in some ways better than a crate. For one, it’s easier to get to the water; just throw it on your back and grab the kayak, your rods or something else and save yourself a trip. The shoulder straps are top notch and Evolution Outdoor added some really nice padding to land along the angler’s shoulder blades.

It’s also better than a crate in my opinion because you can spin around, grab the bag and move it to the front of the boat to work out of. Then spin back around and set it in the back when you’re done instead of having to stay in a pivoted position while digging around in a crate for what you need. But this bag isn’t just for kayak anglers—it was designed for creek waders as well.

And again, it’s a great bag for anyone fishing as a co-angler in tournaments or just regularly tagging along with friends in their boats. I’ve actually been without a big boat of my own for nearly two years now and a bag like this is great for me, as I’m regularly hopscotching from dad’s boat, to the bank, to a jon boat and then back to dad’s boat again. And with a kayak on the way, this bag will see even more use soon.

As for a co-angler in a tournament setting, you have room to take almost anything you could need without showing up with five bags like some anglers do, which can be a real controversial way to start the day off. Many a boaters’ brows have furrowed upon the sight of an angler showing up for an 8-hour trip like he’s moving off to college. This bag helps you consolidate a lot of gear, providing a convenient system to bring anything you might need. 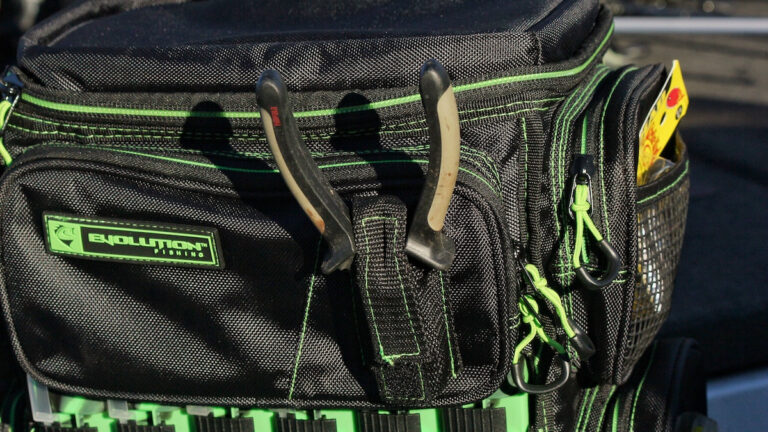 All in all, this is a great tackle bag for nearly any angler out there who fishes from a kayak, walks the bank, wades off in the water or hops in and out of his buddy’s boat from time to time. With all its pockets, pouches and boxes, the Evolution Outdoor Drift Series Tackle Backpack provides a convenient place to stow all your hardbaits, soft plastics and tools. And you can either choose to store what you’ll need for the day in the top hatch, or tuck a reel, extra spool of line or even a light raincoat inside there if need be.

And all of this in a backpack that you can sling over your shoulder to stroll a little ways or strap on tight across your chest for a long haul. A pretty sweet bag that I’m personally looking forward to using more as I hop in and out of dad’s boat and start diving back into the kayak scene soon. Available in blue or green, the Evolution Outdoor Drift Series Tackle Backpack retails for $119.99, making it a bit of an investment, but one you won’t be disappointed with.