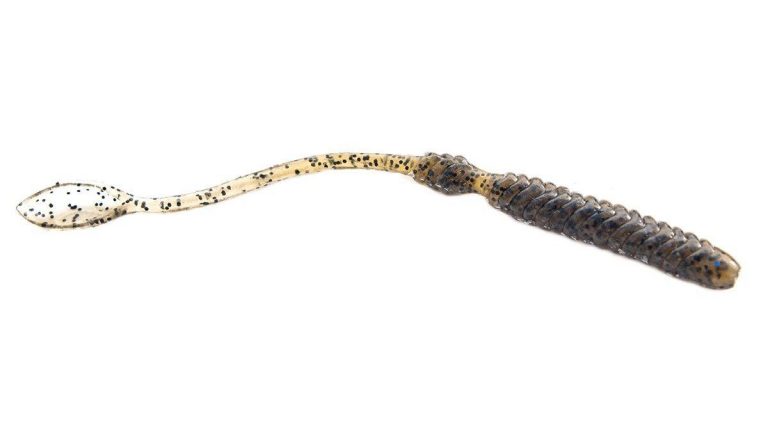 Sometimes it’s necessary to downsize our presentations when we’re bass fishing. I don’t necessarily like to do it, but there are times in which I don’t really have a choice. When the bite gets tough due to weather fronts, fishing pressure or ultra-clear water, a more subtle presentation can work wondersâ€” even for big fish.

Down here in my neck of the woods, we have some sort of a funk going on that’s irritating the mess out of me. We’ll have 80-degree temperatures for a week, then fall teases us with several 60-degree days before turning hot again. The result, other than everyone being sick, has been an extended transition period for the bass. It’s been tough, so I’ve had to resort to finesse fishing to save my hide.

I got tired of throwing the same stuff for a few days, so I broke out a crazy-looking bait called the Damiki Finesse Miki. And what started out as an experiment has turned into a really productive bait for me.

There are four things worth noting about this bait.

It doesn’t take much to make it dance

I think a lot of anglers get carried away when they’re fishing a shaky head, or any finesse technique for that matter. As the water cools and the bass become more lethargic and sight-oriented feeders, too much movement can spook them long before they even think about eating your bait.

The Damiki Finesse Miki is special because it has an excellent erratic action with very little angler involvement. In other words, even when you’re just barely shaking the slack in your line, the entire bait moves and undulates along the bottom. This allows you to keep the bait in the strike zone for a very long time without sacrificing any action.

I’ve experimented with this bait a lot in shallow, clear water and have been very impressed by the results. The small, thick mid-section of this bait is connected to the upper-part by a very thin strip of plastic, which gives the Finesse Miki’s tail a very enticing action with very subtle shakes of your rod tip. 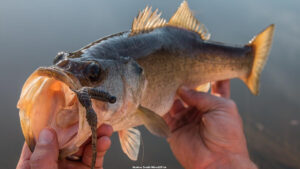 When the bait is at rest, the tail remains elevated above the bottom and sways back and forth slightly with the slightest movement of the water. For this reason, I’ve recently had a great deal of success by simply dead-sticking the Finesse Miki in and around deep brush pilesâ€” especially at night when fishing dock lights. I’ve been making long casts to the brush, letting it sink to the bottom and keeping it totally still with a slight bow in my line. After 20 or 30 seconds, my line will slowly swim to the side and I’m able to set the hook on a nice bass.

The tail leaves a bubble trail 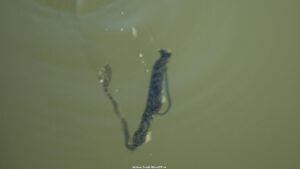 Perhaps the most noticeable feature of the Finesse Miki is its bulbous tail. I liked the idea at first, but I was a bit concerned as to how it would affect the durability and skipping ability. After fishing with it for several days, however, my worries were put to rest.

Keep in mind, I’ve been getting the majority of my bites by dead-sticking this bait. I’ll cast to very specific pieces of cover, let it sit completely still for about a minute and cast again if I don’t get bit. I believe the unique tail of the Finesse Miki has played a large role in my success with this technique. As the bait falls, you’ll notice a prominent bubble trail as it shimmies to the bottom. They’re not huge bubbles by any means, but it seems as if they’re just enough to attract a nearby bass’ attention. 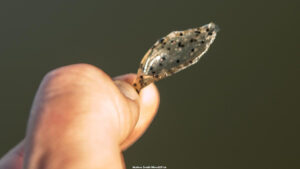 I’ve also spent some time skipping the Finesse Miki underneath docks on a 3/16-ounce shaky head. As I mentioned, I was worried that the tail would catch too much water and create too much drag for accurate, long skip casts. But the tail is actually very soft, allowing it to collapse a bit as it glides across the water’s surface. So I’m happy to say I’ve been able to skip it with the same accuracy as traditional finesse worms.

It holds a hook very well 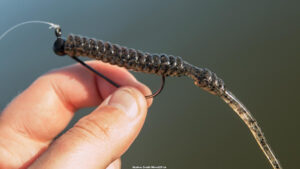 In my opinion, there’s a razor-thin line between a finesse worm being “soft enough” and “too soft”. There’s definitely a time and place for super-soft soft plastics but I get a little tired of going through an entire pack of them each time I go fishing. I’m a big dock fisherman, so I try to find shaky head baits that offer two important characteristicsâ€” action and the ability to stay on the hook.

The Damiki Finesse Miki stays on the hook much better than I anticipated. Anytime I see a really skinny mid-section on a soft plastic, I’m a bit skeptical of its ability to stay rigged after repeated skip casts. But with most shaky heads, the hook point will penetrate this bait in its thick, upper-section which is awesome in terms of durability. I rarely have to stop fishing to re-rig it which saves me a lot of time and hassle.

More durable than it looks 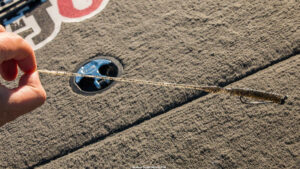 To be honest, when I saw the Finesse Miki for the first time I figured it would be a good finesse worm for one or two bites before its tail got ripped off. Looking at the photos, you’re probably thinking the same thing. And I can’t blame you one bit.

But much to my surprise, this is a pretty hearty little bait. I’ve caught up to four fish on a single Finesse Miki which far exceeded my initial expectations. You’ll have a few fish that like to jump and go crazy that will eventually jerk the tail away from the body, but I’ve found that to be a fairly rare occurence. I’ve certainly used baits that are more durable than this one but I don’t really have any durability complaints given its unique body shape.

We’re coming into the time of year when the bass are going to start acting like little brats. But that won’t stop most of usâ€” we still have to scratch our fishing itch and get out there, so we might as well get out there and play along with ’em. I think the Damiki Finesse Miki can catch a lot of these fish, so even though it looks a little strange, be careful not to overlook it.