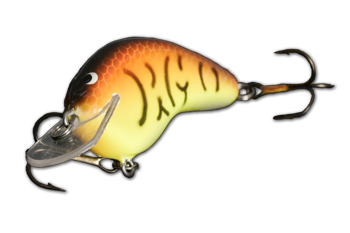 Pop-R legend and perennial powerhouse on the FLW Tour and American Fishing Series circuits, Craig Powers is taking some time away  from professional fishing to focus on his other passion – bait building. East Tennessee has a storied history of crankbaits and yet not much is said publicly about them. I think guys like to keep the baits quiet because of their effectiveness, often known for their flat sides and coffin lips.

Several anglers like Ott Defoe, Powers and his running buddy Koby Krieger have used the East Tennessee connections to put a bunch of money in their pockets. Powers has been painting and making crankbaits for a long time, even painting some tournament winners for anglers like David Dudley. But it wasn’t until the end of last year that Powers decided to pull the trigger on the new bait business.

“I basically spent the whole winter building up our inventory,” Powers said. “I make each bait by hand, and I use custom made jigs to ensure every single bait is the same and has the same angles on the lips. Anyone who knows me knows I like to keep fishing simple so we’ve kept it to three styles and 10 colors to start.”

The baits look great but there is more under the hood than just a bait a guy carved and painted in his garage. Each bait is specially weighted to be able to cast well. Each bait has an eight layer dipping process to get it painted, sealed and hardened to a lasting finish.  But Powers goes even further in his thought processes on materials.

“The first thing people always ask me is why doesn’t it have a circuit board lip if it’s homemade,” Powers said. “The simple answer is because this is 2010, not 1969. The technology is so much better in clear coat and sealants and lip materials that we don’t have to use circuit boards. My baits are 2 1/2 to 2 3/4 inches. But if I put a circuit board lip in them, they now become a larger profile because the board is white not clear.”

The other reason is because back in the early days of custom homemade crankbaits, Targonal was the sealer of choice. Problem was it was hard on the outside and the wood was real soft on the inside. The bait would get cracked and nicked. Guys would dip it in lacquer to get it hard again and seal it so it wouldn’t take on water, but lacquer would eat through the plexiglass lips. And the old sealer would turn yellow and make the baits look ugly. But now Lexan is available. Better sealants and epoxies are available, and Powers sees no reason to use the circuit board anymore.

“Circuit board will grind down faster than Lexan and I’ve never had a Lexan lip break on me,” Powers said. “I can cut the lips longer and still have a good bait with a small profile because the lip is clear.”

Powers points out that each Series is a set of tools.

“If a guy thinks one crankbait can do it all, then he should just keep buying his crankbaits from Walmart and call it good,” Powers said. “But when he realizes that certain crankbaits excel in certain situations he learns that they’re tools. When the bass get out there on the ledges, and they’re 15 feet deep, you need a DD22. When they are up shallow in cold water, the Rapala Shad Rap has the right action. Each one has a specific purpose.”

And so it is with his three series of baits. Here’s his recommendations for fishing situations.

Series 1 – This is like a Shad Rap with a little more weight so that you can throw it further and anglers can reel them as fast as they want.  The bait will run 2 to 6 feet.

“If I’m going to fish a flat and look for a school of fish, I’m going to choose a Series 1,” Powers said. “It has a tight wiggle and it works well around grass because with that wiggle you can tell when you’re in the grass. It’s my answer to a lipless crankbait. It’s a search bait that I can fish fast to find active fish.” 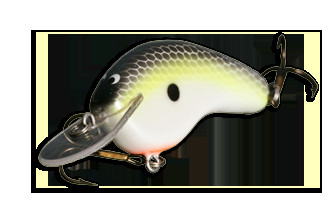 Series 2 – This is the bait for fishing around cover. It has a longer bill than the Series 1 and the pull point is on the bill and the angle is sharper. This makes a wide wobbling bait that will crawl over cover.

“People believe this myth that you have to have a square bill to come through cover,” Powers said. “It’s not the shape of the bill but the angle and the pull point that determine how the bait will ride. The Series 1 will hang in cover. It’s not made for that because it has a tight wiggle and the hooks ride down more. But the Series 2 because of the bill angle, rides with its back hook up and the middle hook higher than the bill, so the bill deflects it around cover. It’s great around rip rap, stumps and laydowns.” 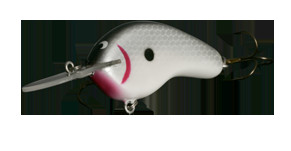 Series 3 – It’s the workhorse bait. It’s a bait designed to run 4 to 9 feet and for fishing on more 45-degree banks. The wobble is between a Series 1 and a Series 2.

“I call this bait Geronimo,” Powers said. “It’s a warrior. If you want to catch a fish, go with Geronimo. It works in more situations but again it’s another tool. If I’m running steeper banks, this is what I throw. It’s setup to cast like a rock.”

The unique aspect of CP’s Series Crankbaits is probably in delivery. Most homemade crankbaits might take you 4 to 6 weeks to get. With CP’s baits, you get your baits in a matter of days.

“I’m only making 3,000 a year. So once they’re gone, you’ll have to wait until next year. But that’s because 3,000 is how many I can personally hand make in the offseason without having to hire someone to help and possibly make the baits differently. But I built the inventory so that when a guy calls and orders and needs a bait, he gets it in a few days. Not several weeks later.”

We received three of the baits, one of each series. Just as Powers said, The Series 1 is a fast running seeker that casts surprising well for its size. The Series 2 is a crawler. It will crawl over laydowns with a high rod tip but still has the ability to be launched out over a stumpy flat. And the Series 3 will catch a lot of bass off shallow ledges and points in that magic 5-8 feet zone on top. It’s great on steeper banks and points and casts superbly.

We put some Mustad KVD Elite Treble hooks on ours, and it didn’t seem to modify the action at all. The baits all ran true out of the package, something that sometimes can be amiss with custom homemade baits.

The baits sell for $14.99 and can be ordered from CP Crankbaits on Facebook.