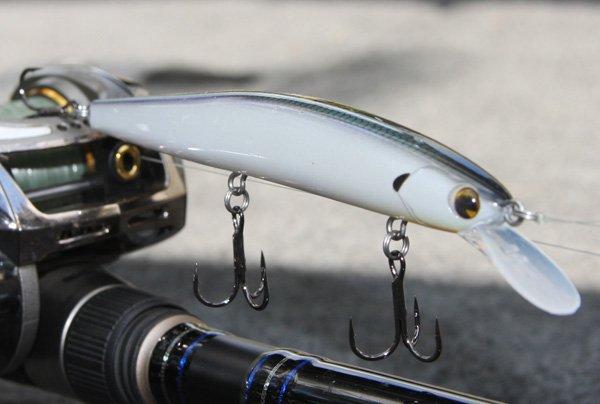 The Flit 120 is one of those products.

Designed by FLW Tour pro Michael Murphy, the Flit 120 is a jerkbait in the tradition of old standby plugs, with a slender, minnow shaped body and three treble hooks hanging off the bottom of the bait.   But, that’s where the comparisons come to rest.

Murphy, from South Carolina, wanted a jerkbait with the slim profile, that would have   a frantic “walk-the-dog” action as older plugs such as the Rapala Original Floaters and the Smithwick Rattlin’ Rogues do, but would reach the deeper depths like the modern baits with long bills do. Baits like the Lucky Craft Staysee and Jackall Squirrel will reach deeper depths, but also require a gentler touch, because they can be “over-ripped” causing the bait to tumble.

The Flit 120 is built upon a foundation of triangles. If an angler was to look at the bait from the front, they would see that the back is wide, and the sides of the bait cascade inwards towards the belly creating a triangle shaped plug that grabs the water giving a tighter, more frantic action upon a retrieve.

While the body aids in providing the action, so does the diving lip. But, unlike the lip of other baits which is added to the design after the shape of the body, the Flit 120’s bill was constructed to enhance the action, while not tiring out the angler with “pull back” on the retrieve. Ima touts that Flit 120 is capable of diving to depths of 6 to 8 feet on the retrieve.

Along with the shape of the body, the Flit 120 is constructed using triangle shaped rattle chambers in the body that enhance the sound of the bait.   Ima used a copious amount of bb’s in the body that give it a unique sound in the water. Similar to lipless crankbaits that employ rattles to mimmick the sound of a school of bait fish, the Flit 120 has similar characteristics.

Flit 120 is 4 inches long, and weighs 1/2 ounce, making it perfect for making long casts on baitcasting gear. While it may seem counterproductive in today’s era, the Flit 120 does not have a weight transfer system; the bait is perfectly balanced and casts like a bullet, even in a stiff breeze.

Flit 120 comes in 15 colors including translucent, opaque and foiled colors. The different shades give the user plenty of options for any given conditions. We chose the Tennessee Shad pattern for the conditions we were faced with. We would like to see a couple of brighter colors for stained water applications, but Ima seems to be releasing new colors frequently.

Our test day consisted of an incoming storm front that brought a significant drop in air temperature, dark looming clouds and steady winds from 10 to 15 mph out of the northeast. The water conditions on the reservoir consisted of clear water with visibility between 4 to 6 feet; water temperatures were between 56 and 57 degrees for most of the morning.

We chose a 7-foot, medium-heavy Powell 703 CB Glass rod and a Pflueger Patriarch casting reel with 7.1:1-ratio spooled with 8-pound Berkley Trilene 100% Fluorocarbon line in Green Tint. We tested the Flit 120 for the ability to suspend out of the package, expecting to upsize the hooks to help it suspend better in the colder water. However, it hung perfectly still in the conditions, so we kept the stock No. 6 Owner Stinger trebles on the bait.

We fished the Flit 120 for much of the morning of our test day, and found the bait to be as billed. The bait cast well into the wind, giving us plenty of distance to work the bait down long stretches of gravel banks looking for feeding bass. It also ran to about 6 feet on 8-pound-test fluorocarbon, and we’re told that a larger diameter fluorocarbon will actually help the bait run deeper.

Flit 120 was a dream to retrieve, allowing the bait to have plenty of action without too much pull back, meaning that it would be a fairly easy lure to cast and retrieve all day without fear of excessive fatigue.

In two hours of steady use, we caught three bass, two spotted bass and one largemouth on the Flit 120 up to 3 pounds. The strikes came as the Flit 120 was suspended between twitches, and all were hooked solidly on the front two hooks, we had two other fish slap at the bait that did not hook up.

Flit 120 is a worthy jerkbait for bass anglers at all levels. The $17.99 price tag may give some anglers pause, but the construction and performance make it an excellent value in concert with other Japanese jerkbaits on the market. We highly recommend Flit 120.

You can buy them by clicking here.