When everything else fails to produce, anglers around the world rely on wacky-rigged worms to get the job done. By hooking a stick worm or finesse worm through the middle, you’re able to show the bass something totally different than they’re accustomed to seeing. This technique doesn’t just catch small ones either; some of my biggest catches have come on a wacky-rigged stick worm.

I’ve spent the last several months testing the Buckeye Flick-It jighead. After catching bass with it in in several different bodies of water, it has become a major confidence technique for me.

I’m a big believer in making accurate, low-profile casts into precarious areas. Public-water bass get a ton of pressure throughout the year, so if you’re able to get your baits into areas most anglers bypass, your chances of getting bit skyrocket. Bass aren’t as dumb as many anglers think and they will often change their behavior and patterns when fishing pressure becomes too much.

The Buckeye Flick-It skips excellently; if you can skip a weightless worm or soft jerkbait, you’ll enjoy the same success with this jighead. When the jighead hits the water, it doesn’t catch a lot of water which allows it to skim across the surface quietly. I’ve done a lot of damage skipping the Flick-It underneath boat lifts, jetski lifts, dock walkways and willow trees. If there’s a fish nearby, they usually eat it within just a few lifts of the rod tip.

Throughout my testing, I’ve been using a 7-foot, medium-action spinning rod spooled with 8-pound test. This combination has proved ideal for the 3/32 and 1/16-ounce sizes.

While you can certainly wacky rig a worm on a generic weightless worm hook, it often poses a problem for anglers: You make an awesome skip cast, work it a few times and right when you reach the juice, the open hook gets snagged on a piece of good-looking cover.

The Buckeye Flick-It, however, is designed with a wire cable weed guard that allows for impressive weedlessness. It extends to the bend of the hook, so you’re able to make those awesome skip casts without constant worry of snagging. Skipping a wacky rig underneath boat docks is a big producer in my area and this has become my preferred jighead for the job. To date, I’ve only broken off two Flick-Its in several monthsâ€”much better than going through an entire pack of hooks in a single day like I’ve done in the past.

The wire cable guard is just rigid enough to keep the jighead free of snags, even in especially gnarly cover such as deeper brush piles and rock. The 3/16-ounce version is excellent for making subtle presentations to brush piles in the 12 to 15-foot range.

This has really opened up a new door for me in terms of fishing deep brush because anglers rarely do it. Instead of yo-yoing a shaky head for several minutes to coax a bite, I get bit with the Flick-It within a few seconds of coming into contact with the brush. Again, I credit this to the bass’ unfamiliarity with this presentation. 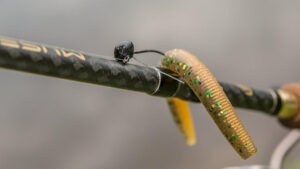 Most of the weighted wacky jigheads I’ve used in the past have round heads. I’ve caught some good fish with them, but they don’t really add much action to the worm itself; they simply make them sink faster.

The football-shaped head of the Buckeye Flick-It adds a slight, but very enticing shimmy as it falls to the bottom on slack line. I’ve experimented a lot with it in shallow, clear water and have noticed that with small movements of your rod tipâ€”such as lightly popping the slack in your lineâ€”the jighead will slightly rock from side to side. This is especially true with the smaller 3/32 and 1/16-ounce sizes.

This unique head shape also seems to make a noticeable difference when fishing docks. Round jigheads have a tendency to wedge between cross braces and small cracks in the wood, but much like a football jig scurries across rocks without snagging, the Flick-It makes its way through these obstacles while rarely wedging and becoming stuck.

I’ve used a lot of wacky jigheads that come through cover excellently, but won’t stick a fish no matter how I set the hook. This is because many manufacturers get so caught up designing it to be weedless, that they totally overlook the importance of a high hookup ratio.

This particular jighead, however, has allowed me to have an outstanding hookup ratio. The wire cable weed guard is stiff enough to come through cover, but limp enough to compress and get out of the way when it’s time to set the hook.

I’ve tested it with a pull hookset and more of a snatch hookset and the results have been the sameâ€”the fish get in the boat. 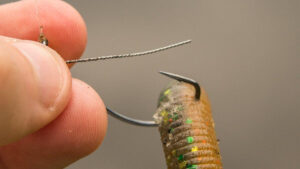 If you frequent tougher fisheries that call for finesse techniques, the Buckeye Flick-It is absolutely worth a try. I’ve been quite impressed by its weedlessness, action and hookup ratio.