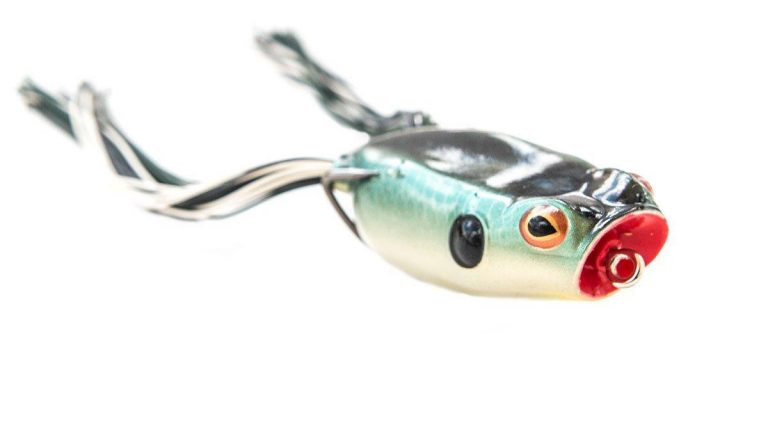 Hollow-bodied topwater frogs have become incredibly popular in recent years. They’ll come through almost anything, they’re forgiving on bad casts and most importantly, they’re renowned for catching some really big bass. Let’s face itâ€”there’s not much more you could possibly want in a topwater bait.

After catching some near double-digit bass on these baits in the past year, it’s safe to say I caught the “froggin’ bug”. I’ve always loved ’em, but lately I’ve been spending a lot of time experimenting with different models. All of this testing has taught me a lot about what I wantâ€”and don’t wantâ€”in a topwater frog.

I’ve been fishing with the Booyah Poppin’ Pad Crasher for about three or four months now in both large and small bodies of water. If you’re thinking about giving this model a try, I think there are several important things you need to know about it.

There’s a fine line in regards to the collapsibility of hollow-bodied frog. On one hand, the body needs to compress easily when a bass bites in order for the hooks to effectively penetrate the its mouth. On the other hand, a body that’s too softâ€”although it might have a great hookup ratioâ€”can make it quite difficult to retrieve the frog through heavy cover without snags. It’s a tricky balancing act. 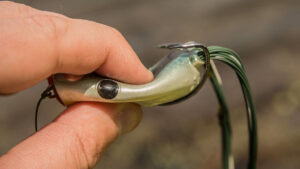 I’ve found the Booyah Poppin’ Pad Crasher to have just about the “right” amount of collapsibility throughout my testing. When a bass attacks it, I don’t necessarily have to do the customary “two-second wait” before setting the hook. I’ve been setting the hook almost immediately after the initial blowup and enjoying an extremely high hookup ratio. As long as you can avoid the temptation of setting the hook to the side, you won’t have any problems getting your hands on some nice bass.

The Poppin’ Pad Crasher’s hooks are also worth noting. They’ve stayed sharp after several-dozen fish catches and more importantly, haven’t warped or bent out of shape after particularly aggressive strikes. You’ll find a few frogs out there whose hooks are sharp but lack the durability to yank a 5-pound fish out of the thick stuffâ€”I haven’t had that problem thus far. I can wrench the hooks out of the bass’ mouth with a big set of pliers and keep fishing. 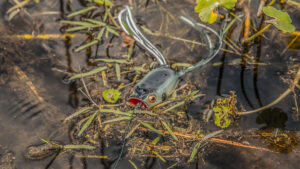 As far as this frog’s “four-wheel drive” ability goes, I’ve also been impressed. I haven’t had many issues getting it through thick laydowns, snotty, topped-out grass or shoreline vegetation. The hooks seem to be fairly well-protected by the soft, plastic body. I will say, however, that I have had a few hang-ups when targeting thicker grass stalks. The hooks will catch from time to time, but it certainly hasn’t been to the point of irritation yet.

Pop it, walk it or both

The cupped mouth of the Poppin’ Pad Crasher isn’t as large as I though it would be. I have several other frogs in my collection with a much more “dramatic”â€”I guess that’s the right wordâ€”cupped mouth. Admittedly, I was a bit skeptical of this design feature before I fished with it, but I’ve quickly grown fond of it.

This design feature gives me the ability to do three very important things with this frog: I can walk it, pop it or combine the two and do both at the same time.

I really like how easily this frog walks in open-water situations. With very subtle, downward twitches of the rod tip, I’m able to achieve a great walk-the-dog retrieve that’s difficult to get with some of the other frogs I’ve tried. It also keeps its cadence quite well, meaning I don’t have to constantly keep track of its walking action. Steady, downward twitches are all that’s necessary to cover a considerable amount of water in a short period of time.

When there’s a light chop on the water, I’ve had a lot of success popping this frog much like you’d fish a traditional popper-style hard lure. It barely dips beneath the surface of the water, just enough to expose the realistic color patterns on its side. It’s also very easy to adjust the aggressiveness of your popping. Light rod twitches produce a nice “spitting” sound that I’ve found productive around sparse grass and more drastic rod twitches create a deeper “chugging” sound which has been killer underneath docks recently.

You can also “chug” and walk the Poppin’ Pad Crasher at the same time. It takes a little more practice initially, but you’ll probably get the hang of it quickly. Essentially, I’m fishing it just like I would fish a Spook, but with harder downward twitches of my rod tip. This makes a very aggressive, hard-darting action that can elicit some pretty nasty reaction strikes in lowlight hours.

This frog also casts very easily, which can be advantageous when you’re targeting ultra-shallow bass. It weighs 1/2-ounce, so long and accurate casts are quite attainable. The smaller cupped mouth also makes skipping underneath docks and overhangs simple. Those dock fish rarely see a topwater bait over their heads, so this is a great way to capitalize on their unfamiliarity.

The bass won’t rip it to shreds

I’ve used the Poppin’ Pad Crasher a bunch lately. Whether I’m fishing it in the evenings after work or letting my less experienced buddies give it a shot, it has certainly been put through its paces. It has caught a bunch of fish, been inadvertently launched into trees by friends and misfired into dozens of dock posts. 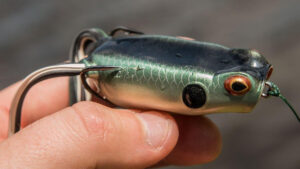 For such a soft-bodied topwater frog, I’m extremely impressed by its durability. You’ll find a few teeth marks on the plastic, but nothing that comes anywhere close to compromising the integrity of the color scheme. I did, however, knock the rear weight out of one a few weeks ago after I made a “oopsie” cast into a concrete seawall. But I can’t really blame the poor frog on thatâ€”it was definitely operator error in my opinion. 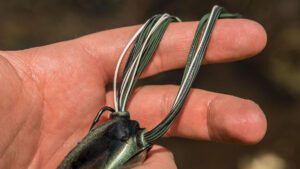 This is an excellent topwater frog at an even better price point. It’s priced at $5.89 and it holds up well to the common rigors of heavy-cover frog fishing. If you have the “froggin’ bug” like I do, I certainly think it’s worth a try.

The Booyah Poppin’ Pad Crasher is available at TackleWarehouse.com.