Anglers have probably seen the buzz and announcements about Berkley NanoFil fishing line on our site and other places by now. It’s going to be a big deal at ICAST we predict. However we could send out all the press and cool videos and tell you it was great, but that’s really not our style. We like to be the judge of whether or not fishing products are not only good and functional but that they are also improvements and better than stuff we already have. So much new tackle comes out every year that is nothing more than someone else’s version of what is already available to anglers. That’s somewhat frustrating as anglers because it just makes for a dizzying amount of tackle that you question whether it’s good or not. When in doubt, go with the original. That’s always my take.

Berkley has another original product on their hands. I will preface this review by saying that when I saw the press materials, pictures and videos for NanoFil, my eyes rolled and I’m sure I let out a little sigh. I’m a skeptic when it comes to tackle anymore. That probably comes from testing and studying literally thousands of products over the last 10 years.

The quickest way to turn me off in the description of your product is to tell me it’s revolutionary. That word is more overused in the fishing industry than “awesome” or “dude” in the young folks vocabulary. The fact is very few things are awesome or revolutionary. To us revolutionary means that all other companies are going to look at doing things a different way because of the release of this product.

That could end up being the case with NanoFil. I was a skeptic when I got the spool. I said, “Ah this is Berkley Fireline Crystal again.” But then I got it out of the package and unspooled it and spooled it onto a spinning reel. When I had it spooled on the reel, my first thought was it looked like tape on the reel. It seemed to lay a little flatter on the spool than regular braid or mono or fluoro did and it seemed to blend into itself.

So I decided to start testing it with something light – an 1/8-ounce shaky head. I figured if I could cast some light baits, it would change my mind if it didn’t cause my line to fluff off the spool, get knotted up and some of the other problems you tend to have with regular braid or superlines on a spinning reel with real lightweight baits.

First cast I was going to hit a dock post up next to the bank. Dang! First cast and I made a bad shot and cast it about 10 feet up on the bank. Reeled in real quick and fired my shot with much better aim up to the post. What the heck? I’m on the bank again. One more time and again I’m 10 to 30 feet off my aim. I really am getting a bunch more distance on my casts. So much that I had a learning curve for casting it. I got up around the docks and started skipping baits under the docks. Same result, I’m shooting baits way further than usual.

I finally get a bite and the fish had me over a bar on the dock. I fight the fish over and land him. The line is fine, no kinks, no overruns, it’s flat on the spool, no weird pooling of line on the reel like sometimes happens with braid. It’s really different.

It’s hard to explain about its consistency. I’ve heard some say it’s like dental floss. Others liken it to a fused superline. But I think it behaves most like masking tape. It lays flat. If I bend it; it stays bent until I straighten it out, and then it straightens out. The line really doesn’t have a lasting memory. It doesn’t lay on the water in coils. As soon as I cast and close the bail, Nanofil was flat across the water to my lure.

We’re very pleased at how it spools, how it casts and how it handles. Tying knots can be hard because of the small diameter of the line. We fished with 8 and 12 pound test for our review. And we’ve used standard Palomar knots as well as the double Palomar knot they have suggested and dubbed the Nanofil knot.

You’re probably still wondering why this line is different. In technical terms, it’s Dyneema which is a gel-spun polyethylene. Dyneema is the fiber that their superlines are made of. However where this different is that this acts as one strand of Dyneema because they found a way to molecularly bond many strands of Dyneema together into one strand. So you get a line that is not braided. Not fused. And it acts more like a monofilament because it’s bonded into one strand. So it’s not a monofilament. It’s a molecularly bonded multifilament that becomes a uni-filament. 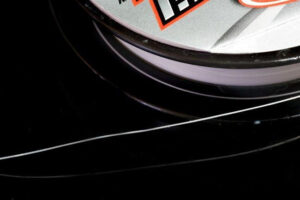 Wheh! Enough with the technical talk for now. The thing I really like about it is how well it casts, spools and handles coupled with how strong it is. It took a 5 by 5 uni knot well (5 wraps of fluoro and 5 wraps of NanoFil). I do wish it wasn’t white, but that will give them something to work on for later I suppose and it’s nothing my black and green markers can’t fix easily.

The price is going to be a little bit of a gotcha. The spool I got was 150 yards, and it was $19.99. That’s a bit steep for any type of line. Until you consider that you could hypothetically fish with the same line from now until this time next year, just changing fluorocarbon leaders. Then it doesn’t seem to be as hard a pill to swallow.

We won’t know for some time about its durability and longevity. We’ve heard that it does have a tendency to fray although we didn’t see any of that in our tests yet. So that could be the type of cover you fish it around and how you apply the line. Our knots seemed to hold well and the line had no noticeable abrasions on it. So we’re pleasantly pleased with this new line.

It’s not another fluoro, another mono or another superline. It’s a new deal that is worth your reviews. We’ll leave it up to you to say whether it’s revolutionary but it’s definitely unique.