One such profile that has become very productive for flipping is the oval profile. The Reaction Innovations Sweet Beaver took put a new spin on the profile of a tube and made a new shape that really excelled for flipping. Since then there have been hundreds of iterations of newer spade type profiles

One new iteration of this category of baits is the Berkley Havoc Pit Boss. One of the first baits in the new soft plastic line from Berkley, the Pit Boss is a lot like a tube and a lot like a bug bait. Its narrower profile allows it to slip through cover well and the softness of its four tentacles seem to resist “grabbing” as it slides through crevices in the cover. 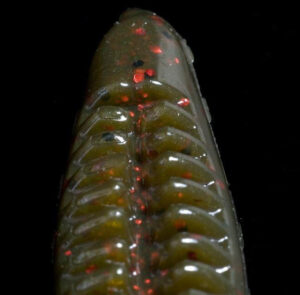 The Pit Boss was designed by Skeet Reese and features several caveats that seem to make the bait function well. First there is a notch in the head of the bait that allows a straight shank flipping hook to stay snug to the bait. We’ve been using a Gamakatsu Heavy Cover Flipping Hook and a Lazer Trokar Flipping Hook with much success with this bait. The hook and keeper stay firmly in place on the bait while fishing but the bait pulls free easily on a hookset. 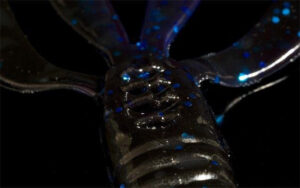 The next feature is a hook cavity on the backside. There are several ridges where the hook point passes through and keeps the bait weedless. But because it’s not solid plastic, the hookpoint easily pops out of the plastic on a hookset and this results in very solid hookups. 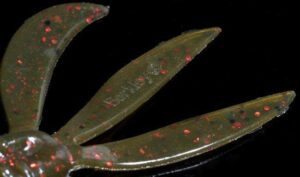 The final features are the four legs. The legs move and kick sporadically as the bait pops down through the cover and as you swim it back up and over obstacles in the water. It gives the bait a lively action and the fish have really responded to it in our testing. The inside legs are scissor shaped and the outside legs are more scythe shaped. This combination seems to provide a lot of flare in the legs as the bait falls through cover.

We’ve boated upwards of 60 bass now on the Pit Boss. On average the bait will last for two to five bass. The head often tears when landing a fish and when it does, it makes the bait next to impossible to rig correctly. So it’s on to a new Pit Boss. The good thing is we got a package of 8 baits for $2.99 a pack at Tacklewarehouse.com, so we’re not breaking the bank every time we lose a flipping bait.

The legs seemed to be pretty durable, with the head tearing usually before the legs did. Occasionally small fish would pull a leg off when nipping at the bait, but for the most part we felt the appendages were pretty durable.

We really like the colors so far that we’ve fished with. Black and Blue is hard to beat as is the color California. We’ve flipped the baits in dirty muddy water and in clear to stained water with equally positive results. On a light weight the bait glides a bit and on a heavier weight it punches right through the cover.

The baits come in ten pro tested colors, many of the staples you’d expect. So far we’ve been pleasantly surprised at how well the baits have fished and have purchased several packs for all the flipping we’ve been doing this spring. If you’re a big time flipper, you need to give these baits a try. We’ve not experimented much with them as jig trailers or on Carolina rigs, but we feel they would be equally effective on those rigs as well. 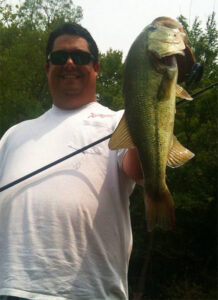