I’ve actually been thinking a lot lately about the way I finesse fish. I work with a lot of professional anglers—who are much better fishermen than me, I might add—and a large majority of them prefer using braided line with a fluorocarbon leader. But to be totally honest, it’s been a pain in my behind lately. Whenever I’m guiding folks, I find myself constantly re-tying leaders when they get too short and the braided line doesn’t provide much forgiveness to inexperienced anglers. I understand it’s part of the gig, but I’ve always felt like there has to be an easier way.

As a result of my frustration, I have been experimenting with using fluorocarbon main line and several of my spinning reels just aren’t cut-out for it. For the past few months, however, I’ve been testing the Abu Garcia Orra Power Finesse Spinning Reel and it has changed my view regarding the compatability of spinning reels and fluorocarbon line.

Here’s what I found most noteworthy about this reel.

Fluorocarbon line is much stiffer than both braided line and monofilament. In addition, it holds memory—or coils—when it sits on your spool for an extended period of time. These two factors can make it troublesome on spinning reels. Throughout my experience, I believe if your spinning reel isn’t specifically designed for use with fluorocarbon, line management problems and frustrating wind knots are inevitable.

This reel, however, has two really intriguing features I believe are responsible for better handling with fluorocarbon.

If you’ll notice, the top of the large-diameter spool is tapered significantly. Throughout my testing, I’ve noticed that this design allows for much less resistance as the line dispatches from the spool. This has resulted in less “whipping” as the line uncoils which, of course, reduces line twist significantly.

Remember, line twist is your enemy in this situation. Many anglers will spool fluorocarbon on their spinning reels and love it at first, but that’s simply because there’s no line twist yet. After a few days, or sometimes hours of use, the twist becomes more evident and causes a lot of frustration. This tapered spool facilitates smooth, low-resistance casts with fluorocarbon and the results have been very noticeable for me. 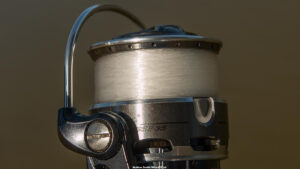 When you disengage the bail wire on Orra Power Finesse—or in other words, when it’s parallel to your rod blank—it stays very close to the spool. This small, yet very important feature allows for much tighter coils as your line leaves the spool because the bail wire, for a lack of a better term, keeps it “in-check”. These tighter coils reduce slapping on your line guides and reduce line twists, resulting in a pleasurable finesse finesse fishing experience with fluorocarbon.

If you’re an angler who prefers using braided line, the braid-ready spool is also worth noting. There are small rings cut into the spool, which allows you to easily secure your braid with very limited slipping or unwanted movement. 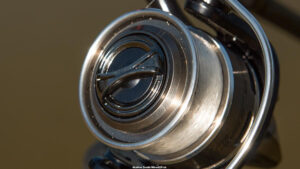 I look at spinning reels much differently than casting reels when it comes to drag performance. I tighten the drag as much as possible on casting reels and use my thumb bar to release line, which means I’m most concerned with strength. With spinning reels, however, I’m most interested in the smoothness of the drag system.

With this reel being priced at $99.99, I was curious to see the drag system in action because it’s difficult to find an affordable spinning reel with a solid drag. I’ve caught some pretty nice bass with this reel over the past few months and I have to say— it’s pretty darn smooth. As the water has cooled on my local fisheries, even the small bass have been fighting like crazy and the Orra Power Finesse has been more than able to counter any strong, boat-side runs.

I really like the fact that it doesn’t take an aggressive tug to engage the drag. That first surge is often the cause of many lost fish and missed opportunities, but this reel performs smoothly and consistently without putting any extra pressure on the fish during the fight.

One of the biggest concerns with finesse fishing for many anglers is their perceived inability to control big fish during the fight. And if you think about it, they have a point. If you skip a shaky head underneath a dock with 8-pound test, it’s tough to manipulate the bass’ course with a low gear ratio. That’s usually when the “Please stay on, baby!”-types of phrases become prevalent.

The Orra Power Finesse has a 5.8:1 gear ratio which, if you ask me, is pretty impressive for a spinning reel. If you’re a flipper and pitcher who’s used to 7.1:1 ratios, it probably doesn’t tickle your fancy quite as much, but it’s all relative. I’ve really enjoyed being able to take up a sizeable amount of line with just a few quick handle turns, however.

It’s very solid with no “play” 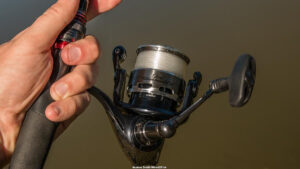 I’ve been through a lot of spinning reels in my short time here on Planet Earth. Maybe I’m too rough on my gear or quite possibly I fish too much—it might be a combination of the two—but I can burn through them in a New York minute. And when they break, it’s almost always the same issue. The bail wire gets loose, the screw strips and she’s a goner.

So with my questionable past with spinning gear, I’m very conscious of the amount of “play” a reel may or may not have. I’m looking for a spinning reel I can shake, turn the handle, flip the bail wire and use for an extended period of time without hearing or feeling any rattling or jiggling.

I’m happy to say that this reel seems to be very solid. Keep in mind, I haven’t used it for an entire season of guide trips or tournaments yet, but after some pretty long hours on a notoriously tough fishery, I’ve been very pleased with its durability and design. Nothing on this reel moves that shouldn’t and even though that sounds like an elementary way of describing it, I think you understand what I’m trying to articulate.

If you like to finesse fish, I believe this reel is worth putting on your Christmas list this year. Weighing-in at 9.3 ounces, it isn’t as lightweight as some more expensive reels but it’s still a solid addition to your arsenal.