I probably donâ€™t use spinnerbaits as much as I should when bass fishing. Iâ€™ve definitely caught some big bass with them over the years, but for whatever reason Iâ€™m more prone to pick up a squarebill or a bladed jig in shallow water. To remedy such an injustice, Iâ€™ve made it a point this fall to spend some time casting a spinnerbait each time I go fishing. And what do you know? Iâ€™ve been catching the fool out of them and my love for spinnerbaits has experienced a revival of sorts.

For the past two months, Iâ€™ve been having a lot of success with the Terminator T1 Double Willow Spinnerbait. It looked pretty sexy in the package and the bass around home have been gagging on shad lately, so I decided to try â€˜em out. After a lot of fish catches and experimentation, I think itâ€™s a really nice spinnerbait worth looking into.

You donâ€™t have to baby it

I use spinnerbaits much like squarebillsâ€” I crash them into any available cover I can find to elicit reaction strikes from otherwise lethargic bass. Iâ€™ll catch some fish every now and then casting to bare banks, but itâ€™s largely a target-oriented presentation for me. And thereâ€™s no sense in using wimpy equipment around shallow cover in my opinion.

As a result, durability is one of the biggest factors I consider when purchasing spinnerbaits. Iâ€™ve seen wires come totally detached from the head, blades fall off and wires snap like a twig and while itâ€™s certainly frustrating, it wastes your hard-earned money. Iâ€™ve put the Terminator T1 Double Willow Spinnerbait in some pretty nasty places lately and have been very impressed by its durability.

Iâ€™ve gotten some nice bites by skipping the Terminator T1 underneath docks and it has held up excellently. Whether Iâ€™m bumping it into dock posts, slamming it against cross beams or executing the always-beautiful â€œOh, Crap!â€ cast in which I fire it directly into the dock, I havenâ€™t noticed any loss of structural integrity or signs of premature wear.

This spinnerbait also features something called a SnapBack Titanium wire frame which is really darn cool and saves a lot of hassle on the water. It sounds like a really fancy name, but itâ€™s actually pretty simple. You can bend the wire any way imaginable and it will always return to its original position. Go aheadâ€” try it. 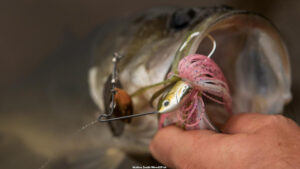 The SnapBack system is extremely practical because no matter how many bass I catch or how many bonehead casts I make, the wire doesnâ€™t lose its shape. Youâ€™ll find a lot of spinnerbaits out there that bend and warp after just a few fish catches and, if youâ€™ve ever tried to re-shape a spinnerbait wire, itâ€™s not very fun. For someone like me who loves to power fish in heavy cover, this is a great little feature that eliminates one of the most frustrating aspects of spinnerbait fishing. 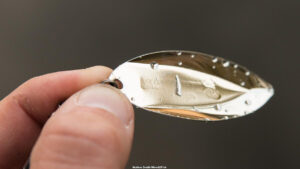 I was never very good at science, but it seems as if these slightly â€œcuppedâ€ blades catch a bit more light throughout the retrieve which, in turn, emits more flash. Iâ€™ve compared this spinnerbait to a few â€œnormalâ€ willow leaf spinnerbaits and thereâ€™s certainly a noticeable difference.

I was worried, however, that the beveled blades would cause too much lift. I imagined them acting similar to a big Colorado blade. But after a thousands of casts in different depths, I havenâ€™t noticed any added lift. In fact, the first thing I said to my guide client after making a few casts with it was, â€œMan, I really like how well this thing hold its depth.â€

These unique blades also donâ€™t seem to inhibit the Terminator T1â€™s ability to run true. Again, Iâ€™ve beat the tar out of this spinnerbait and I havenâ€™t had to tinker with its tuning a single time. It ran straight right out of the package and months later, itâ€™s still perfect.

Really nice colors that are easy to change 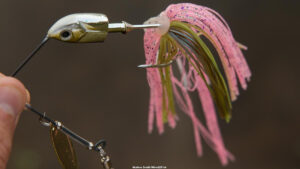 So I just said that bass donâ€™t eat spinnerbaits because theyâ€™re pretty. I really believe that, but pretty spinnerbaits do give me a lot more confidence. And in my honest opinion, a confident angler is a successful angler.

With that being said, the Terminator T1 Double Willow Spinnerbait is a beautiful spinnerbait. Its detailed head looks great in clear water and its long, flowing skirt seems to add a little extra â€œpulseâ€ throughout the retrieve. 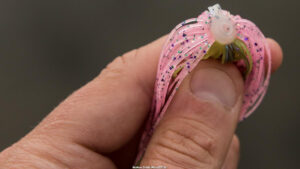 What I like best about the colors, however, is that theyâ€™re really easy to change. You wonâ€™t see any dry-rotted rubber bands holding the skirt in-place. Instead, thereâ€™s a single, molded piece that keeps the skirt as a one cohesive unit. The skirt strands donâ€™t get uneven and fall out, which is awesomeâ€” but you can actually slide the entire skirt down the shank of the hook and thread it onto another spinnerbait body. This has allowed me to get creative with my skirt color and blade combinations, which has definitely added a little intrigue to spinnerbait fishing for me.

Itâ€™s pretty heartbreaking to see a 5-pound bass come up and â€œflashâ€ on your spinnerbait. For whatever reason, itâ€™s a pretty common problem among anglers and folks always ask me how to combat it. Other than making minor adjustments to your retrieve speed and cadence, I tell everyone the same thingâ€” sharpen those nasty hooks!

Iâ€™ve been impressed by the sharpness of the Terminator T1â€™s hook. Iâ€™m pretty particular about sharp hooks with my spinnerbaits and squarebills because Iâ€™m constantly abusing them, but Iâ€™ve found these hooks to be very durable. I will sharpen them after every trip just out of good practice, but I wouldnâ€™t consider it a necessity.

Iâ€™m not saying these sharp hooks will stop the bass from occasionally â€œflashingâ€ at your spinnerbait, but I have noticed a sharp decrease in this behavior with these hooks. If they touch â€˜em, they seem to get hooked most of the time.

If you like fishing with spinnerbaits, I recommend looking into the Terminator T1 Double Willow Spinnerbait. Itâ€™s a bit pricey at $8.89, but I think the durable wire, beveled blades and nice colors help justify the price point.

The Terminator T1 Double Willow Spinnerbait is available at TackleWarehouse.com.

Check out this awesome underwater footage of the Terminator T1 Spinnerbait in action!