Crankbait fishing seems simple enough, right? While it is a relatively easy technique to master, gear selection can be absolutely critical. You can get away with a standard “all-purpose” casting rod and enjoy moderate success, but finding and using the proper rod will ultimately lead to longer casts, easier bite detection and most importantly, a higher hookup ratio.

Since I started paying closer attention to my rod selection years ago, I’ve noticed an enormous increase in my success. I wish I could tell you that any ol’ stick will suffice, but that’s something I can’t say in good conscience. Your rod plays a huge role.

Because so much of my fishing success comes on crankbaits, I’ve been antsy about trying the brand new Abu Garcia “Ike” Delay Series Casting Rods. They were personally designed by Elite Series pro Mike Iaconelli specifically for reaction lures, which had me licking my chops from the minute I heard about them.

After lots of casts and some fun fish catches on the 7-foot, medium-action model, I’ve come away with a solid understanding of this rod series that can help you when you’re making your next purchasing decision.

Crankbaits catch big fish, but they’re a double-edged sword at times. While these lures have an ability to coax otherwise inactive bass into biting, they’re notorious for losing big bass when it matters most. To be honest, it’s the nature of the beast—treble hooks come unbuttoned frequently. That’s exactly why I’m so adamant about using rods specifically designed for crankbaits.

When you first put your hands on the 7-foot, medium-action Abu Garcia “Ike” Delay Series Casting Rod, it’s probably going to feel a lot different than what you’re used to. Its tip is extra flimsy, almost reminiscent of a light-action spinning rod, yet its blank is oddly powerful. These are the two primary features that make this rod special.

This particular model is designed to have 50% tip and 50% backbone. In other words, the top-half of the rod feels like a wet noodle and the bottom-half is rigid and powerful. You’re not going to be able to flip a Texas rig, throw a buzzbait or heave a topwater frog with this rod. It’s strictly designed for reaction lures.

Here’s why it’s a good thing.

When bass attack a crankbait, they’re not always going to choke it. It’s not uncommon to catch big fish with both sets of treble hooks on the outside of their mouths—it’s often an instinctive reaction bite instead of a hunger bite. If you’re using a stiff rod for cranking, you’re going to pull the hooks away from the bass before it has a chance to hook itself. You need a momentary delay, hence the name of this particular rod series.

While using this rod, I’ve noticed a tremendous hookup ratio. It’s quite sensitive, but the parabolic bend allows for a split-second delay between bite detection and your hookset, which allows the tip to load beautifully. This special action has resulted in most of my bass being hooked with both sets of trebles, inside of their mouths. I’ve noticed very few bass that were hooked by single hook point or outside of the mouth. And of course, the deeper the hooks, the better chances of getting that big one into the boat.

I’ve actually let some of my beginner guide clients use this rod when we’re fishing smaller crankbaits. There’s no doubt that “feel” plays a sizeable role in this technique, but this rod is particularly forgiving. If it takes my client a bit longer to detect a big bite, the soft tip acts as a rudimentary shock absorber without ripping the hooks away from the bass. So even if you’re not very experienced in crankbait fishing, this is a rod that will help you pick up on it very quickly. 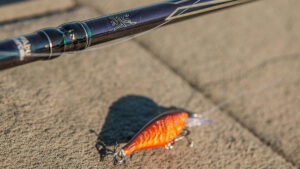 The ultra-soft tip of the “Ike” Delay Series Casting Rod also doubles as a catapult, for lack of a better term. In order to cast small, lightweight lures effectively, it’s important that a rod loads well on the back cast, giving the lure optimum momentum as it launches forward. In my experience thus far, this rod absolutely does that.

For whatever reason, small crankbaits are ridiculously effective on my home bodies of water—they win tournaments throughout the entire year. But the downside is often the lack of castability with these lures. I’ve spent a lot of time testing this rod with crankbaits that anglers often use with spinning rods, such as the Rapala No. 5 Shad Rap. I prefer to have the power and control of a casting rod when I’m cranking, so it was important to me that this rod could handle a 3/16-ounce lure with ease.

The results were great, to be honest. I’ve been able to use this rod when fishing small plugs on windblown banks, points and riprap with very few backlashes. Of course, your reel is 50-percent of the equation as well, but this rod does an excellent job when fishing in unfriendly casting conditions. I’ve been able to stay farther away from prime casting targets and dissect them from a distance with impressive accuracy. 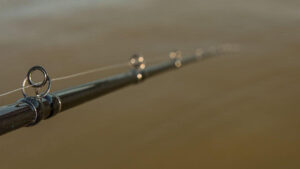 So I’ve talked a lot about the tip of this rod—a soft tip is great, but suitable backbone and power is just as important. When you run across a 6-pounder on a long cast, your rod needs to have the shoulders to keep you in control of the fight. All it takes is a small twig, stump or jump to ruin your chances of catching a huge bass.

Starting from the tip, the first 8 line guides of this rod are all about shock absorption and sensitivity. But when the parabolic bend reaches the ninth line guide, the backbone takes over and puts the fight into your hands. I’ve had bass bulldog me at the side of the boat and this rod gives me just the right amount of leverage to stay ahead of the bass.

I’ve found this especially useful when target-casting shallow crankbaits to particular pieces of cover, including long stretches of riprap. When the bass bites, my number one goal is to get them away from any and all cover. I’ve been able to do that quite effectively with this rod. Although fishing treble-hooked bass requires finesse, there are definitely times in which you need to take matters into your own hands to avoid potential heartbreak. 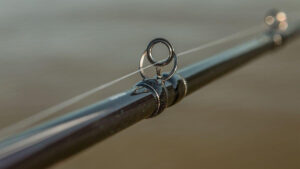 This isn’t the lightest cranking rod I’ve ever used—it has a little bit of weight to it. But after experiencing its durability and solid build, the extra weight quickly became overshadowed.

Whether I’m casting, retrieving or fighting a fish, I’ve noticed absolutely zero noise coming from this rod. That’s an odd thing to say about a fishing rod, but I’ve used plenty that snap, crackle and pop throughout a day of fishing. And guess what? Those are usually the rods that end of snapping on a hookset.

Everything on this rod is “tight”. The reel seat cinches down firmly, the guides don’t bend, the inserts haven’t fallen out and rod tip has held up excellently. It’s been a nice feeling not having to baby it while I need to be concentrating on finding fish. 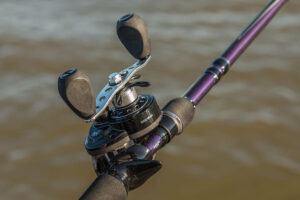 I like it—a lot. To be honest, I wasn’t even aware of its price point until I started putting this article together. This particular model is priced at $129.99 and it performs better than some of my $200 cranking rods. You won’t be blown away by its weightlessness, but I honestly believe you’ll become an instant fan of its action, especially if you like to throw smaller shallow crankbaits. If you’re looking for a new cranking rod, don’t overlook this one.