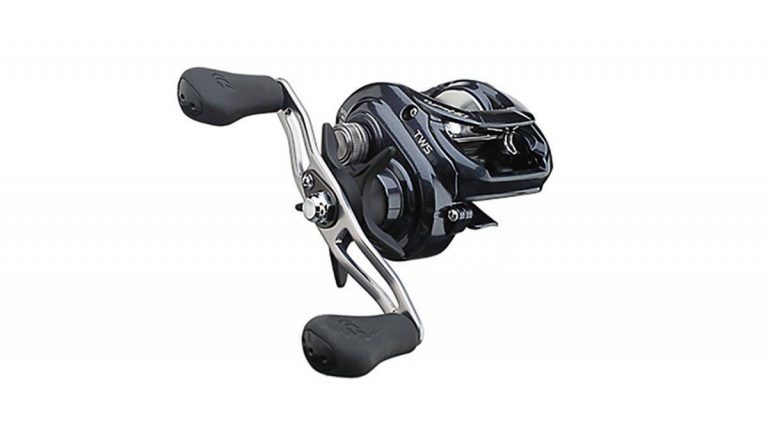 Bass are inherently spooky creaturesâ€”they know when something isnâ€™t right in their environment. This makes long casts essential for many bass fishing techniques. The further you can position yourself from them, the better your chances of getting consistent bites. For this reason, I make a concerted effort to use reels that allow for longer casts. You can always shorten your casts in close combat situations such as pitching and flipping, but you canâ€™t lengthen the cast if your reel doesnâ€™t allow for it.

Iâ€™ve been testing the Daiwa Tatula Type-HD for quite some time and Iâ€™ve found it to be an excellent tool for making long-range presentations. After lots of casts and fish catches, Iâ€™ve learned a lot about this reel and I think there are several design features worth mentioning. 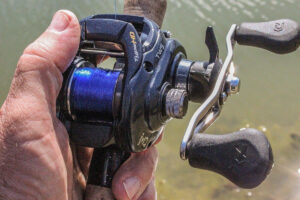 Iâ€™ve primarily been using the 7.3:1 Daiwa Tatula Type-HD Casting Reel for fishing jigs, spoons, big worms and heavy spinnerbaits around ledges, points and channel swings. In order to keep these baits in the strike zone for as long as possible, long casts are a big deal. So I wanted to test this reel in the situations for which it was designed.

This reel actually holds 30% more line than many other models and you can certainly tell the difference on the water. It has a deep A7075 Aircraft Aluminum Spool, which sounds fancy, but it basically equates to a reduction in weight. In order to hold more line, the spool does have to be a bit larger, but Daiwa did an excellent job striking a â€œhappy mediumâ€ between increase line capacity and weightlessness.

Regardless of the wind conditions or the weight of your lure, Iâ€™ve found this reel to cast quite well. Itâ€™s easy to tune, making for easy on-the-fly adjustments and its casting distance is very impressive. Iâ€™ve had a lot of anglers ask me about this reel after theyâ€™ve seen me make bomb casts on the water. Thereâ€™s no need for a huge wind-up or back cast, eitherâ€”long casts seem to be fairly effortless.

The increased line capacity also gives me more peace of mind when Iâ€™m making these long casts. So often youâ€™ll make a long cast, look down at your spool and notice the knot to your backing. If a bass takes any line at the end of your cast, youâ€™re in trouble. But itâ€™s been really nice having the ability to bomb a cast and have plenty of line left when you hook a big fish.

T-Wing system is both innovative and impressive 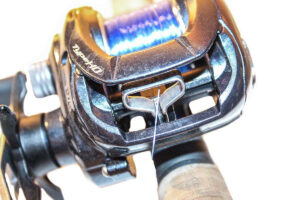 This reel utilizes Daiwaâ€™s T-Wing system to allow the line to spool more freely out of the reel. Honestly, when I first saw this system I wasnâ€™t sure about the durability. But after using it extensively throughout the fall and now the early spring I am pleasantly surprised.

This system is impressive in both design and the engineering that makes it work, which gives me confidence in its performance. When casting, the T-Wing drops down to let the line flow through the wide portion of the upper T-aperture. When winding the bait or fish back to the boat, it retracts and lets the line flow down to the narrow part of the T-Wing to make sure the line level winds on the spool evenly. Itâ€™s unlike anything Iâ€™ve seen on a casting reel, but Iâ€™ve noticed large improvements in line management. The line lays flat on the spool after each cast, which reduces loops, wind knots and irritating backlashes.

Remember this yearâ€™s Bassmaster Classic on Hartwell when ice buildup was such an enormous issue for the anglers? I honestly believe the T-Wing system could be an excellent solution to this problem due to its wider opening. 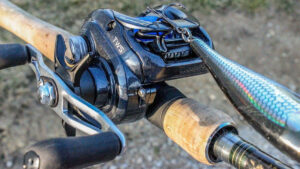 Simply stated, the Type-HD Casting Reel feels rock-solid in your hands. Weighing in at 8.1 ounces, itâ€™s not the lightest reel on the market, but its power and strength makes up for it quite nicely. Itâ€™s a definite workhorse.

Iâ€™ve executed some really powerful hooksets with this reel with the drag cinched down and not once have I noticed any line slippage of any kind. Its 13.2 pounds of drag has been awesome whether Iâ€™m wrenching a fish out of deep brush or shallow coverâ€”Iâ€™ve felt totally in control at all times.

Also worth mentioning are the oversized grips and and extra-long handle. When your hands are wet due to fish handling or inclement weather, the grips are easy to grasp and the increased leverage of the handle makes it quite easy to control big fish at the end of a long cast or at the side of the boat.

Models available for both righties and lefties 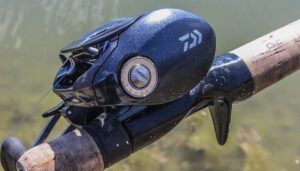 Whether youâ€™re right-handed and prefer left-handed reels for more efficient pitching and flipping or youâ€™re a purely left-handed angler, youâ€™ll be able to appreciate the fact that these reels are available in both right and left-handed models.

This is a sticking point for many anglers and Iâ€™m glad to see Daiwa keeping our left-handed friends in mind. Not mention, itâ€™s available in three gear ratios that cover all of your presentation needsâ€”5.4:1, 6.3:1 and 7.3:1.

If power and line capacity are on the top of your list when purchasing a new casting reel, the Type-HD is worth careful consideration. Iâ€™ve used it with great success and itâ€™s on the front deck of my boat on every fishing trip. Itâ€™s been an absolute joy to fish with.

The Daiwa Tatula Type-HD Casting Reel is available at TackleWarehouse.com.