The perceived high cost of bass fishing often intimidates novice anglers. We watch the pros on television and we think that, in order to catch a bass, we need every piece of equipment they have. If you’re just looking to catch a few bass or maybe win a few hundred dollars in your local jackpot derby, there are some affordable and practical options out there.

I’ve been testing the Abu Garcia Black Max Casting Reel for several months and to be quite honest, I’m a little taken aback by how well it has performed. This reel is priced at just $49.99 and I’ve found it to be an excellent and affordable option for anglers on a budget.

For such a low price, I was expecting to unpackage a large and rather clunky low-profile baitcaster. But at 7.3 ounces, the Abu Garcia Black Max is actually lighter than some of my more expensive reels. It has a one-piece graphite frame and sideplates, which feels very solid and has almost zero flex or wiggle room. I’ve caught fish up to 5-pounds with this reel and I have yet to feel any torquing whatsoever. I have felt in total control of every fish I’ve caught.

The grips of the Black Max are very comfortable and provide excellent grip, even with slime-covered hands. These grips are almost identical to those on my more expensive REVO SX Generation 3, which I thought was pretty impressive that Abu Garcia could incorporate some more expensive design features into such an affordable reel. 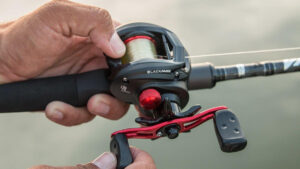 You won’t be blown away by the smoothness of the Black Max, but its 5 stainless steel bearing system is totally suitable for a day on the water. You won’t hear or feel any grinding throughout the retrieve, and I can still say that after several months of use. It operates just as good as the day I got it.

The Black Max is an awesome option for someone learning to cast a baitcaster. It has plenty of castability to facilitate super-long casts, but it’s not “too” finicky when tuning it to a particular lure. Its external brakes make for quick and simple adjustments and even thicker fluorocarbon lines tend to “behave” very well on this reel. 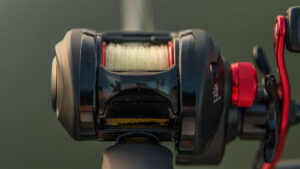 The Power Disk drag system is pretty good, but I wouldn’t rely on it to do all the work. Once the line starts to let out, it’s fairly smooth and operates exactly how it should. But every now and again, I’ll have to pull a bit of line out manually in order to “wake up” the drag system, if that makes sense. But then again, it’s a $49.99 reel, so let’s keep that in mind. I can’t really complain.

I’ve used this reel with both bottom-contact presentations such as Texas rigs, jigs and Carolina rigs while also experimenting with a plethora of moving lures such as crankbaits, jerkbaits and topwaters. Some consumers may be disappointed that the Black Max only comes in a 6.4:1 gear ratio, but I think that’s an excellent starting point for most anglers. It’s plenty of speed to retrieve line quickly when setting the hook, but it’s not “too” fast as to overpower reaction lures.

As I mentioned earlier, I’ve caught bass up to 5 pounds with this reel and I’ve never felt out-of-control throughout the fight. I tighten my drag down all the way, all the time, and I simply press the thumb bar to counter any strong, boat-side surges and the Black Max has done the rest of the work. I’ve also found it to have suitable winding power for both deep and shallow-water techniques. 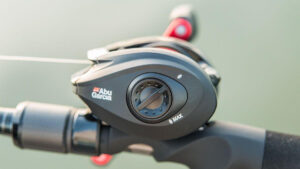 I’ve had plenty of opportunities to use this reel in high winds and its line management and castability is impressive for a $49.99 reel. Even if you’re a beginner, I think the simplicity of this reel will allow you to catch on quickly and easily.

If you’re on a budget, you’ll have a hard time beating the Abu Garcia Black Max. Now—don’t expect the performance of a $349.95 REVO MGX. But for most anglers I know, the Black Max would be a perfect addition if you’re looking to add a few more combos to your arsenal. I recommend it.