The bass fishing in my area has been uncharacteristically tough since the mid-summer months. With the water temperatures so high, tournament weights have been incredibly low and the boat ramps haven’t been nearly as busy. When it gets tough like this, I try to put my bait in front of as many bass as I possibly can. I’ll tie on a reaction bait and fly down the bank making long casts and covering a bunch of water.

This approach has allowed me to test the 13 Fishing Concept Z Slide and really put it through the wringer. I’ve made a bunch of casts with it bombing squarebills, lipess crankbaits and ChatterBaits and its performance has been impressive. Although I’m pretty new to 13 Fishing’s reels, I’ve liked what I’ve seen so far.

I’ll quickly run through my experiences with this particular reel.

Lightweight and comfortable in your hand 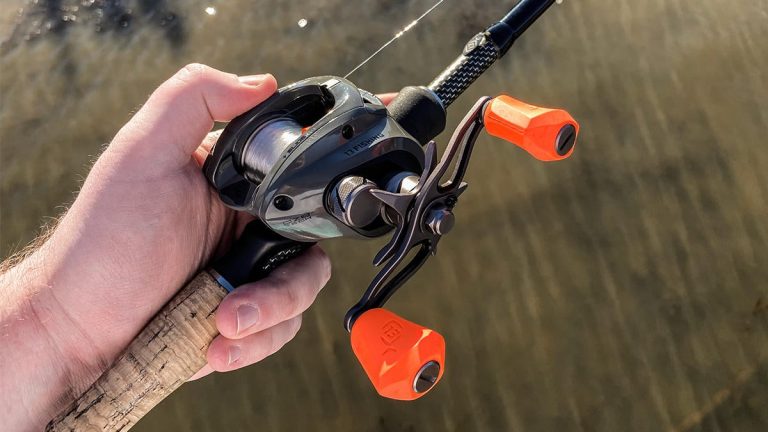 Weighing in at a mere 6.7 ounces, I immediately noticed the weightlessness of the 13 Fishing Concept Z Slide. The frame is actually made from a proprietary Cast Iron Carbon material that’s said to be totally anti-corrosion as well.

The problem with a lot of lightweight reels, in my opinion, is that they almost feel flimsy in your hands. A lot of companies are going all-in on the whole lightweight movement these days, but I’m also finding more and more problems with them breaking and operating poorly. I think a reel has to have a little meat on its bones to stand up to the abuse anglers give them.

So far, this reel feels super solid in my hands. It doesn’t have any weird flex to it when it’s under a load, either. I think 13 Fishing found a great balance between weightlessness and durability with the Concept Z Slide.

Why is it called the Z Slide?

If you look just inside the frame, you’ll notice something pretty cool I haven’t seen in a reel. It’s called the SLIDE Magnetic Cast Control System, which is designed to make it easier to make quick casting adjustments with just the flick of a thumb.

It actually works really well and does make it much easier to adjust this reel. Whether you round the corner and start having to cast into the wind or you simply want to tie on a heavier or lighter lure, this slick little feature does, in fact, save some time on the water. I’ve been using it quite a bit lately, especially with all these crazy weather fronts moving in. Heck, it can be slick calm here one minute and before you know it, it’s gassing 20 mph straight down the river. That type of situation has been when this feature has been most beneficial to me.

I’m glad to see this feature for another reason as well. Some of the 13 Fishing reels I’ve tested cast like an absolute rocket but can be a little temperamental at times. The Concept Z Slide is very angler-friendly, even if you’re a newcomer to baitcasters. You can take it out of the box and be bombing casts in just a few minutes.

If you use enough baitcasters over time, you’re going to run into several with pretty shoddy drag systems. That’s probably one of the biggest complaints I hear from folks about their reels.

The drag system of the Concept Z Slide is really nice and incredibly smooth. It’s a 20-pound system that doesn’t surge when fish take deep runs at the side of the boat and it also has a bunch of stopping power for heavy-cover situations.

I’ve also had some fun with this reel while catching stripers over the late summer months. I actually try to test a lot of my reels on stripers because if a reel can handle a 15-pound angry striper, it can definitely handle a bass. This testing process, however, is brutal on a reel. I have absolutely ruined some reels during testing because the drag systems will get too hot and be rendered useless.

The Concept Z Slide has passed the angry striper test with flying colors. It’s just as buttery smooth and functional as it was the day I took it out of the box. 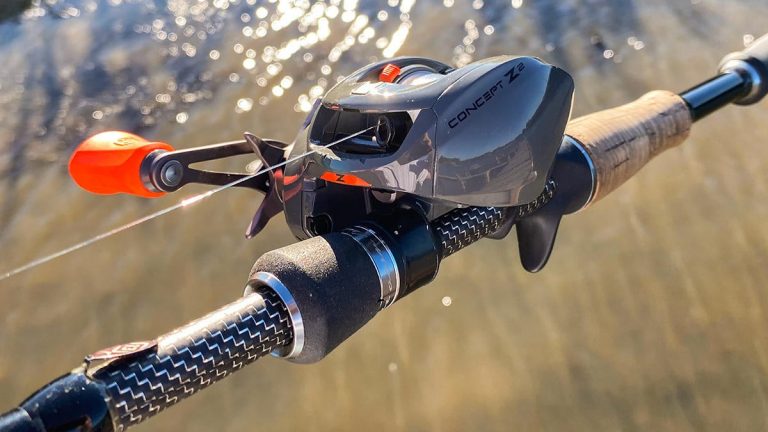 If you’re looking for a higher-end reel, I wouldn’t be afraid to spend the money on this reel. Not only is it sharp looking, but it also offers extreme castability, easy adjustability and very comfortable feel. Don’t sleep on this one.

The 13 Fishing Concept Z Slide is available at these retailers: