Here in the south and across much of the country for that matter, a big ribbon tail worm is a summertime staple. Being able to rig a big worm on a Carolina rig, Texas rig, magnum shaky head or wobble head makes it an extremely versatile bait adaptable to any depth or cover. And the slow-waving action of a big ribbon tail worm is one of those few things that a bass can’t resist, regardless of the water temperature.

I fish a big worm like this on a Texas rig a lot here in Alabama once the water temps reach 80 degrees. I grew up fishing a lot of summer night derbies with my dad and a Texas-rigged ribbon tail worm was something I could use to actually contribute to the cause at a very young age. These days, when we need a keeper or the fish are especially lock jawed, these worms are still a go-to for me.

I’ve spent a considerable amount of time testing out the 13 Fishing Big Squirm lately. This is 13 Fishing’s version of a big ribbon tail worm and I’ve been really impressed with it. Here are some of the things I liked about it that every big ribbon tail worm should have and one feature that I haven’t seen in any other worms like this. 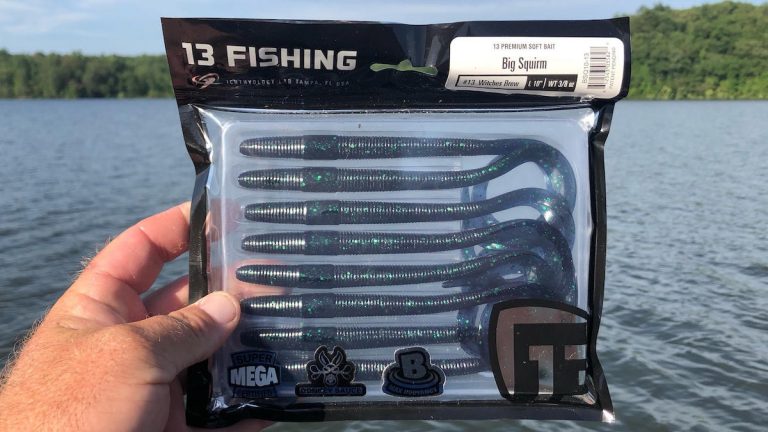 Right away I was impressed with the hard plastic clamshell packaging of the 13 Fishing Big Squirm. Built-in action is so critical when talking about a big ribbon tail worm. Most of the techniques you’ll be using to fish one, especially in the summertime, require a very slow presentation. Typically I’m just dragging a bait like this along regardless of how I have it rigged. The reason being, the fish can get very lethargic in hot water. Especially hot, shallow water.

You don’t want to pop your rod and jerk the bait around a lot. You just want a nice, gentle and slow drag usually. Understandably though, that won’t create a lot of action unless the action is built in. But it doesn’t matter how well the worm is built if it is able to ball up and bend in the packaging.

Some companies have figured out how to package baits in soft plastic bags and still keep them relatively true to form. But by and large the easiest and most effective way to do this, albeit not the cheapest, is with a clam shell packaging like this. So kudos to 13 Fishing for going the extra mile there. 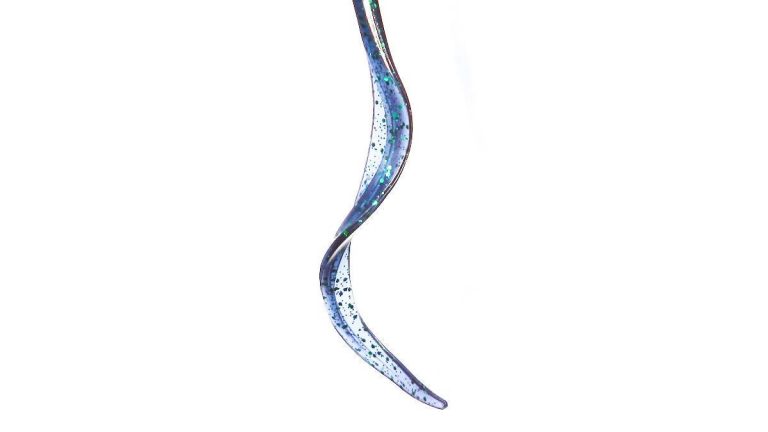 One of the most frustrating things about fishing a worm like this is having your tail bit off. Quite often a small bass or bream will grab only the tail and when you snatch, they’ll take it with them. But, the tail of a worm like this needs to be thin so that it will have the correct action, hence the “ribbon tail” nomenclature that describes this genre of baits.

What I liked about the tail design of the Big Squirm was that it has that super thin flange to it but also a spine of sorts. There’s a thicker run of plastic that makes its way from the body of the worm, along the inside of the curl of the tail and all the way out near the tip of the tail. This adds durability to the bait without impeding the action.

I actually tested this bait mostly on braided line since it is more sensitive and would allow me to get a better feel for the tail. In a worm like this, I don’t want a lot of thump. I want just a nice slow wave. And that’s exactly what I felt, or didn’t feel, coming up my braided line. So the tail design is spot on from both a function and durability standpoint. 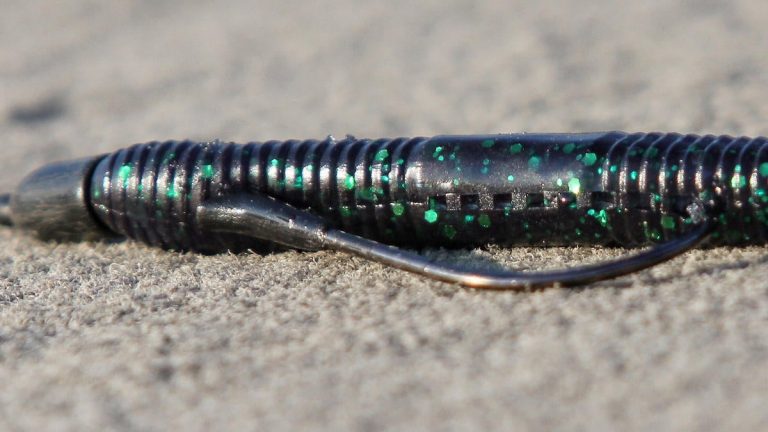 One unique thing I noticed about this bait, that I can only assume was intentional and if so was quite ingenious, are the little divots in the belly of the bait. These are perfect for locating exactly where the bend of your hook will land when the bait is completely rigged.

Anyone who has ever rigged up a weedless soft plastic of any kind has used the poke and hope method. You stick the hook point into the belly of the bait only to pop the hook point out the back and be left with a big U shape in the bait or a tightly stretched segment of the soft plastic. This leads to a series of stabbings where trial and error inevitably results in a straight and well-rigged worm… minus a good bit of the integrity of its midsection.

13 Fishing did away with the guess work with these little indicators. Simply run your hook point through the head of the worm and then lay your hook down the side of the worm, getting the point to where you’ll want it when you the worm is fully rigged. Then look at where the bend of the hook meets the belly of the bait, count up or down the divots so you know exactly which one to punch through and then do so. Voila; a perfectly rigged worm on the first try. 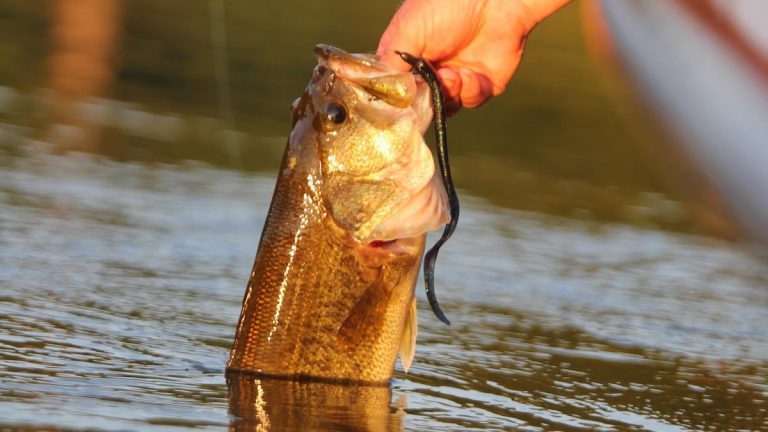 Another frustrating thing about some big ribbon tail worms is that they’ll be too thick or too tough for the hook to penetrate the plastic and then the fish. If this is the case, you’ll set the hook and reel in nothing more than a balled-up bait.

I rigged the Big Squirm up on a VMC Heavy Duty Flippin’ hook and a VMC Heavy Duty Wide Gap hook, both in 4/0 and experienced a good hookup ratio with both. The plastic has a nice density to it to where your hook point won’t just jump out and hang every limb you come by, but it will be poised and ready to unleash on a bite.

The thickness of the bait is proportionately designed as well. It has enough meat to it so that the head of the bait doesn’t tear too easily, but is still thin enough not to impede a hookup down at the business end. 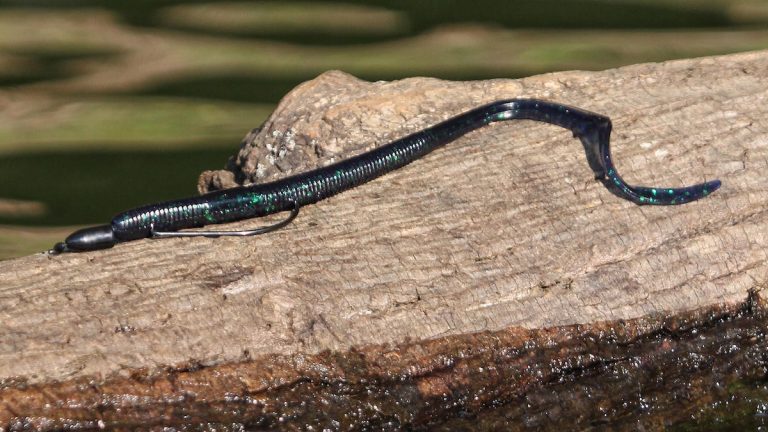 With 8- and 10-inch versions available, I think the Big Squirm is a solid ribbon tail worm to suit the need of any angler. With 9 and 8 to a pack respectively and each at a price point of $5.99, you have a worm that’s slightly on the mid- to upper-end of the spectrum price range wise, but will be true to form each and every time you buy a pack thanks to 13 Fishing going the extra mile with the clamshell packaging. A worthwhile investment of an extra 50 cents at the consumer’s end in my opinion.

The Big Squirm has a good action and several design points that put it right up there with any other worm in its demographic. A soft but durable body and a thin but reinforced tail make it an excellent choice for anglers of all skill levels. Add to that the unique feature of the hook entry point indicators and you’ve got yourself a big-time thumbs up from me.

The 13 Fishing Big Squirm is available at TackleWarehouse.com.