Elite Series professional Byron Velvick knows a ton about swimbaits. He eats, sleeps and breathes them and is coming off an Elite Series win at Clear Lake on….you guessed it…a swimbait. Velvick probably owns more swimbaits than any other angler out there and knows the little things that make a difference. We had a chance to catch him while he was practicing at Guntersville for the upcoming Elite Series event there this week.

1. We caught you on the water pre-fishing for an Elite at Guntersville. Any swimbaits tied on?

“I always have one tied on. The main reason is I don’t want to get beat by someone else throwing one…laughing. You know I love swimbaits and was one of the first “tournament anglers” to use them a lot. The trick is finding the right water column and spot within it where they live. Right now I am looking for the big girls at Guntersville on their way out. They have been back in the bays and I am looking for the right intersection as they move out. Hoping to load the boat.”

2. What categories of swimbaits are there and what is the best time to use each type?

“There are almost too many to name. There is such a variety and it becomes more diverse all the time. There are swimbaits that are for the bottom, almost like a jig or jigging spoon, mid-levels, and topwaters as well. They are like crankbaits. You have a Baby One Minus and a DD22 all in the same family. The same is true of swimbaits. Its really a hunt and peck deal and as I mentioned earlier its about finding the right depth in the water column where they are living. Guys are catching them right now at Amistad in 60 feet of water. They are casting a big swimbait out deep and crashing it into the ledge. They slam it.”

3. Do you always use stinger hooks? When do they play a role?

“I use the Owner Sticker Harness in particular when I am getting short strikes or on smallmouths. Its the deal and it increases the hook up ratio significantly.”

4. On a typical day on the water when do you know the best time to tie one on? When should you put them down?

“I like them early in the day to about 9 am and then again after 1 pm. Seems like the bite really slows down in the midday on them. Unless they are crunching them all day I will put them down in the  middle of the day. I always try to match the hatch with swimbait and because they are so versatile you can find the right spot and depth to throw them on every body of water, north to south, east to west.”

5. Typically swimbaits have been a west coast deal. Is that now a thing of the past and do you see the east as a big market for swimbaits? What ones would you recommend to anglers starting out?

“Absolutely….no question. I win an Elite on Clear Lake and Skeet wins one in Virginia. That pretty much tells the story. I fished them at Smith Mountain and got 39th but have fished them here at Guntersville, Kentucky Lake and Smith Mountain last year with success. Two top 12’s back to back and a check in the other one.”

There are several types of baits for each depth range and type of swimmer. There are boot tails, Pogie Tails like the sassy shad style and the straight tails that are usually jointed baits. There are also soft baits and hard baits and we are always arguing which are better. I use them all and collect every one I can find. I would recommend to those starting out to have a few in each style and don’t be afraid to throw them. You may not get bit a bunch but when you do it can be a big one and that makes it worth it to me.”

“You never know when one size, color or style will work and I want to be prepared.”

Velvick is a pioneer of swimbaits on the tournament scene and is a big fish hunter as well. Taking a big fish approach to tournament fishing has paid big dividends for him in the last few years in particular. 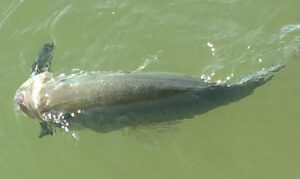