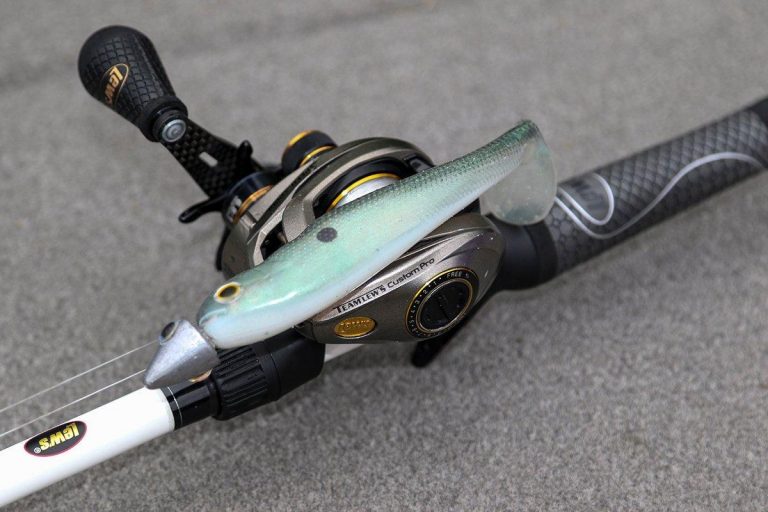 Bethel University’s John Garrett has proven himself adept at catching fish in wide range of scenarios, but the Carhartt National College champion and recent Bassmaster Classic competitor favors fishing for bass in deep water. Whether it’s his home waters on Kentucky Lake or anywhere bass roam offshore structure, he favors a 5 1/2-inch Strike King Shadalicious, which he believes offers a welcome break from the norm.

“When the fish are offshore, they’re mainly eating shad, and a lot of people are going to be throwing crankbaits,” Garrett said. “But they get cranked to death and condition quickly to those baits. That’s why I pick up a swimbait. It’s more subtle. It doesn’t have rattles, and they don’t see it as much.”

Focus on the eyes

A fan of realism, Garret said a swimbait head that looks like it’s looking back at a bass gives him a nudge of confidence that he’s throwing a convincing package. BOSS True Vision 3D Stick-on eyes adhere to his Owner Ultrahead Saltwater Bullet Jig Head with a drop of Loctite glue, but Garrett occasionally employs other tactics.

“If I don’t have the accessory eyes handy, I’ll just peel the eyes off a deep-diving crankbait, stick them on the swimbait head and they hold pretty well,” he said.

Where you glue matters

Garrett also puts that glue to work in securing his bait to the swimbait head. That’s nothing new, but he’s quite the perfectionist.

“I glue the very top of the head on both sides of the hook, but I also glue the (bait keeper) barbs,” he said. “A lot of times, if you don’t glue the barbs, when a fish bites, the barb will actually rip the bait downward.

“Gluing the barbs just keeps the bait from moving more and holds your bait on longer.”

Garrett throws his swimbait on a 7-foot, 11-inch Lew’s Super Duty 3, a fast-action rod with plenty of backbone, yet a generous tip for slinging that bait long distances. Spooling with 12-pound fluorocarbon line helps him keep the bait deep and on the hook set, the lighter line’s give and tip of the rod allows the fish to get the bait and load up for an effective hookset.

This unique retrieve makes them bite

No telling how many followers trail a swimbait long enough to inspect it and possibly detect anything that spells trouble. Garret does his best to eliminate this frustration with an erratic retrieve that prevents fish from getting a read on your bait.

“I’ll let the bait fall all the way to the bottom, make 7 or 8 turns of the reel handle, and I’ll make half a turn really fast to give the bait a hard darting action,” he said. “Then I reel it 5 or 6 more times and kill the bait so it falls back to the bottom.

“This retrieve doesn’t give the fish a lot of time to follow behind the swimbait and get tired of it,” he said. “Usually, if he’s following that bait and you dart it in one direction, he’s probably going to eat it.”