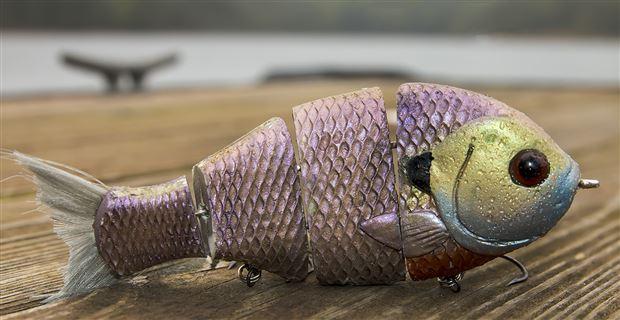 I spend a lot of time working on fishing content and people ask me what I do for fun if fishing is my job. Well I go fishing. But if I had my choice of fishing and did not have to review tackle or produce video every time I went, I would probably go throw a big swimbait all day. I’ve been playing with the Triton Mike Bucca Bull Gill for more than a year now and thought I would share my experiences and thoughts on this fun bait for fishing for bass feeding bluegills.

The Mike Bucca Bull Gill is a one off design from his original Bull Shad design. The Bull Gill is a multi-segmented hard swimbait made to mimic panfish that bass will feed on across the country. While some bodies of water don’t have shad, most will have bluegill or some other panfish that can be a source of food for larger bass. 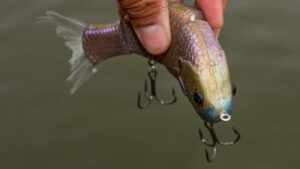 The Bull Gill weighs around 2 ounces and is larger than most big crankbaits at 6-inches in length. It’s a much taller profile than the original Bull Shad so it gives a different look in the water. It swims similarly to the Bull Shad as well but does have a slight different kick because of a more blunt front head shape. I actually feel like it pushes a little more water than the comparable 6-inch shad body. It’s durable, but doesn’t take being smashed into hard objects well. But fish won’t crush it or twist it apart and break it as the joints are very strong.

I have fished it on both 65-pound and 80-pound braid as well as 25-pound copolymer line and 20-pound fluorocarbon. I really like it on braid around grass and on 25-pound copolymer in more open water, around docks and around sparser cover. 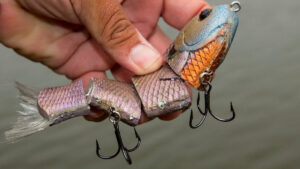 The bait casts really well and I was able to target cast well with it on an 8-foot 13 Fishing Muse Black Swimbait rod with a Concept A3 swimbait reel. It’s a big setup and this bait casts well on a big swimbait rod. Surprisingly I also was able to fish it on smaller setups like flipping sticks. It’s that size of swimbait that can work for a lot of guys wanting to get started playing with big swimbaits.

I’ve caught several bass on the Bull Gill. My largest was nearly 7 pounds last year during high water. And I caught one last month just over 5 1/2 pounds fishing shady pockets where bluegills were shallow feeding and beginning to make beds. I’m playing with it more out deep with more of a pull and drop. I’ve caught a few fish on it but I’m also looking forward to fishing it on some big flats this summer where bluegills roam. 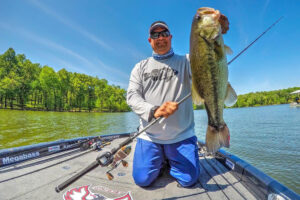 It swims really well at high speeds. It doesn’t lay on its side which can be the case sometimes with big hard swimbaits. It swim true, wakes well, and sinks more horizontally than vertically oriented. It dances well on stop and go retrieves and twitches and pops with the rod and reel.

All and all, I think it’s a good mid-priced hard swimbait to get guys started with big hard swimbaits as well as guys that really understand fishing for post spawn bass around bluegill beds with big swimbaits.

You can find the Bull Gill on TackleWarehouse.com and at BullShad.com. 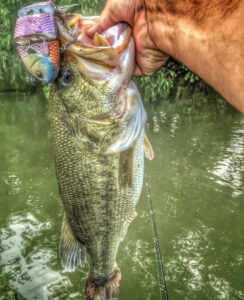 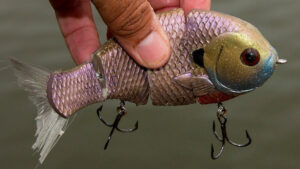